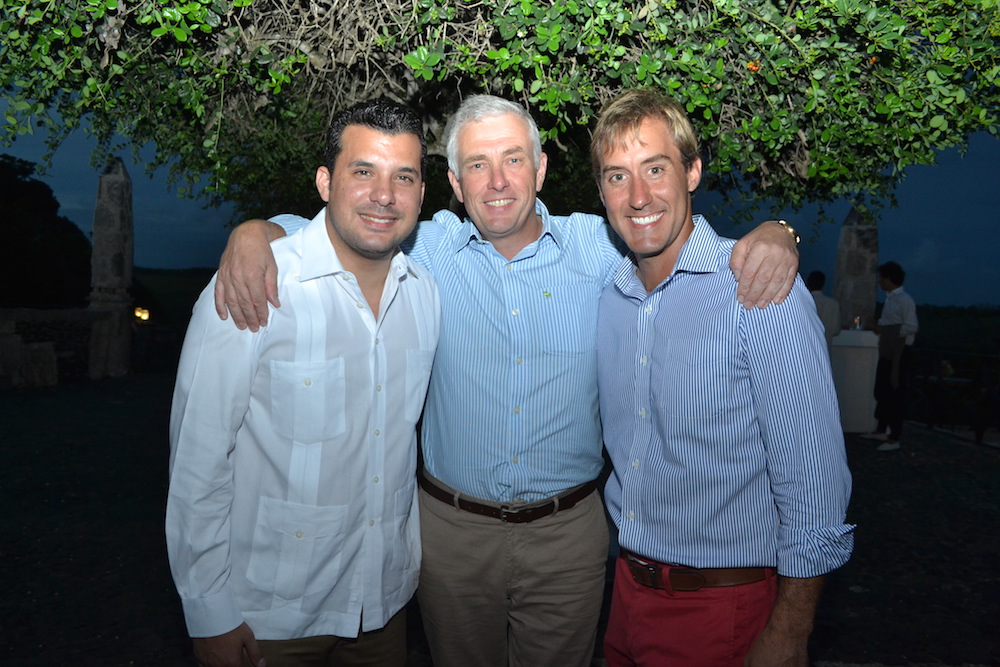 This past Thursday, May 26th during a cocktail at the Plaza Chavón, Casa de Campo announced all the activities and plans they have prepared for this summer. It was a pleasant evening with enjoyable weather, and to everyone’s surprise, it didn’t rain!

While guests enjoyed cocktails and mingled, sitting on the comfortable couches that the Casa de Campo events staff prepared, Rafael Torres, President of Casa de Campo, took to the stage to share a few words on the resort’s plans this summer and introduce the Casa de Campo representatives of each department to fill us in on the fine details. The agenda includes a monthly event, “Flavors of the World: A Gastronomic Journey by Casa de Campo Resort,” featuring Executive Chef, Anthony Masas with esteemed invited chefs. The event is organized with the same aim set last year with the Food & Wine Festival, positioning Casa de Campo as a world-class gastronomic destination. International chefs will visit the resort to introduce special dishes and cuisine in various restaurants.

One topic that was undoubtedly highlighted in Thursday’s cocktail were Casa’s summer camps, of course! Among the plenty to choose from are:

As for entertainment, Casa de Campo presented its concert schedule with not one, but THREE concerts this season! Heading the list is the summer concert by Colombian reggaetón artist, J. Balvin, and the Puerto Rican duo, Zion & Lennox at the Altos de Chavón amphitheater on Saturday, June 25th; followed by talented American R&B singer Chris Brown, who brings his “One Hell Of A Nite” tour on August 6th. Then, just over a month later the concert season concludes with the Colombian composer and singer, Carlos Vives on September 17th.

With so much going on, you don’t even need leave Casa to enjoy an awesome summer! See all our articles below for more details on the events mentioned above from the Dueños Summer Cocktail held at Plaza Chavón on Thursday, May 26th. Plus, see the gallery of photos taken by Mariana Heredia:

“Flavors of the World”: A Gastronomic Journey

“Flavors of the World” is a “gastronomic journey” highlighting a collection of gourmet and fine-dining options which will be available at Casa de Campo until November thanks to several internationally-renowned chefs who will work alongside with the resort’s creative culinary team.

ASA: A Traditional Summer Camp… with a twist!

This summer our kids will be able to experience a traditional camp but with a little twist… it will be in our little piece of paradise! And will enjoy the sun, beach, pools, everything a world class resort like Casa de Campo can offer.

The FCBEscola Summer Camp is back! For the second consecutive year, Casa de Campo will host this cool interactive summer camp for soccer fanatics from July 18-29th.

Following the success of FCBEscola project here, the Dominican Republic has been selected as the first venue outside of Barcelona to host the FCBEscola International Tournament!

Learn the basics with La Vecindad Summer Camp for little ones!

Casa de Campo will surely have your kids booked for summer with all the summer camps available but mostly all of them are for kids of ages 6 or more. But what about the younger ones you ask!? That’s where La Vecindad comes into play with no shortage of amazing activities and benefits to you and your babies.

Summer is quickly approaching! It’s the perfect weather for outdoor activities like summer camp! Now’s the time for parents to select the outdoor programs their kids will be involved in, and lucky for them, there are so many options!

Summer is upon us and it’s the time that many parents think about activities for their little ones. And if you’re looking for an interesting alternative, Kyra Montagu has prepared very special Summer Camp program helping kids to get in touch with natural rhythms and embrace holistic living!

Summer is fast approaching, and our kids are eagerly waiting for all the fun coming with it! This season brings along a lot of summer camps for Casa de Campo residents, and a new addition has made it to the list: Polo Clinics for Children by Fernando Arata, Casa de Campo Polo Director.

Get ready for more Polo in Casa de Campo this Summer!

After a successful high goal polo season in which we were able to witness sportsmanship at its best, Polo Challenge announces its summer season, which will be celebrated between the months of June and July!

An epic Summer concert with Reggaetón superstars J. Balvin and Zion & Lennox is set to happen on June 25th at the Altos de Chavón Amphitheatre as well! The details have been confirmed on the Casa de Campo Resort & Villa’s online calendar of events so this is happening too!

Concerts in Casa continue with Carlos Vives confirmed for September!

Carlos Vives is bringing his most recent tour to the Amphitheater in Altos de Chavón this September 17th. This information was provided by Gamal Haché, and announced at the Casa de Campo Resort & Villa’s cocktail party for villa owners held last Thursday at Plaza Chavón.