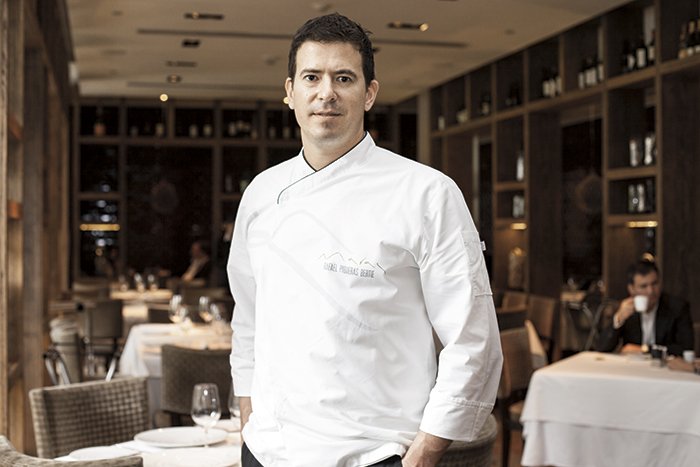 *UPDATE: “Flavors of the World” announces a new chef from Peru: Jaime Pesaque! See the updated article here!* I have to say the weekends I’ve spent in and around Casa de Campo include some of the best food experiences I’ve ever had, and with Flavors of the World food events I have even more opportunity to traverse the world in fine dining. In 10 days, Rafael Piqueras will make his mark on the popular gastronomy series that has so far included countries like Mexico, Italy, USA, Spain and the Dominican Republic. Deemed “one of the most outstanding cooks of Peru” by Brando.com, and whose restaurant Maras at the Westin Lima Hotel falls in “The Diners Club World’s 50 Best Restaurants,” we can expect great things from Piqueras.

The Chef’s Table at Maras, photo by theworlds50best.com.

Originating from Cusco in the south of Peru, Piqueras chose the name Maras for his restaurant in honor of the famous pink salt of the same name that is derived from the region. Stating that salt is “a crucial thing” for him in the kitchen, he incorporates a variety of it from many areas. As one of Peru’s most well-known chefs, he first trained at Le Cordon Bleu before working in restaurants throughout Europe, including Guido in Italy and El Celler de Can Roca in Spain. He was also the first Peruvian chef to be invited to participate in the Madrid Fusion Festival in 2004. Maras is a multi-award winning restaurant that opened in 2011, and in describing their menu as one that is, “a culinary journey through Peru’s coast, mountains, and jungle,” I cannot wait to see what Piqueras decides to bring to us in Casa de Campo!

As is customary, the Flavors of the World culinary weekend will feature two dinners Friday and Saturday night, November 18th and 19th, both of which will be held at la Piazzetta this month in Altos de Chavón, and is followed by a Sunday brunch  at the Beach Club in Minitas. The dinners will have a cost of $60 per person. Come and enjoy the penultimate Flavors of the World series for the 2016 year!

ONE MORE GREAT “FLAVORS OF THE WORLD” TO COME