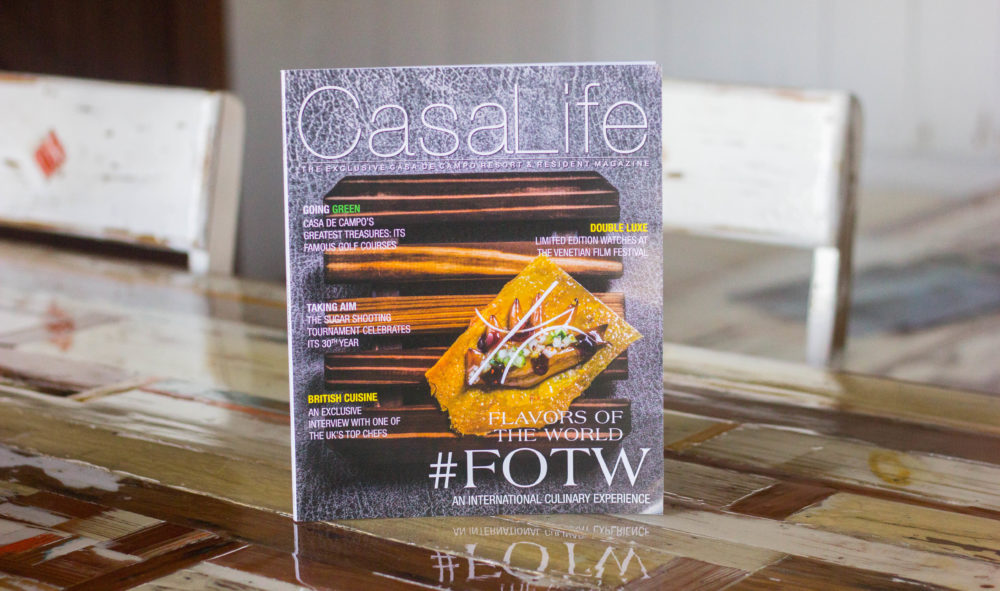 It gives us immense pleasure to say our fall edition of CasaLife magazine is here!! A number of delightful events are recounted with a special focus on Casa de Campo’s trendy gastronomy scene. Flavors of the World Rosas dish, “Cresta de Gallo” makes the cover, while inside a feature interview with Flavors of the World London chef, Alyn Williams notes the city’s evolving culinary atmosphere.

Chef Williams of the Michelin star restaurant Alyn Williams at the Westbury in London describes his experiences of working directly with celebrity chefs Gordon Ramsay and Marcus Wareing and what led to breaking out on his own. A menu that incorporates Britain’s homegrown ingredients, his restaurant is distinctive for its vegetarian and vegan menu.

Flavors of the World Rosas gathered elBulli graduates, Jorge Puerta, Pablo Pavón, Antonio Romero, and Casa de Campo’s Executive Chef Anthony Masas in the most comprehensive gastronomy event in the series to date. Hailing from “the most imaginative generator of haute cuisine on the planet,” this elBulli team brought forth a tasting menu of fourteen plates and an unforgettable experience.

Fast-forward to August and Fundación MIR’s dinner gala was a treat within itself. Always a pleasure to gather in support of the children, this evening had community members dancing to Latin rhythms by the Dekadas band and shopping a number of superb surprises on the “Mystery Shopping Wall”. Cocktails were had at the resort’s new Coco Mar Bar, while renovations were already underway for the new Minitas Beach Club.

Parties are made to be had in Casa de Campo and Altos de Chavón’s Wisin & Maluma concert was a big one to celebrate. You’ll remember fire blasting from the stage, dance moves that roused ecstatic fans, and Wisin’s charisma that made us recall why he’s one of our favorites!

In CasaLife’s penultimate edition of the Designing Paradise series written by David Peacock and Adolfo Despradel, the evolution of Casa de Campo’s architecture unfolds. Neighborhoods began to be constructed around the resort’s iconic sport, starting with the Golf villa, and grew with the influences of international architects and their take on Dominican style. This must-read article speaks to how much the natural environment plays a part in unique villa designs and notes Costasur’s “unbreakable rule” of construction.

More COOL spreads are in the pages like autumn’s cozy seasonal styles, Cartier’s fashionable Queen’s Cup at Guards Polo Club, and how Scotland’s blended whisky business makes a comeback with The Lost Distillery.