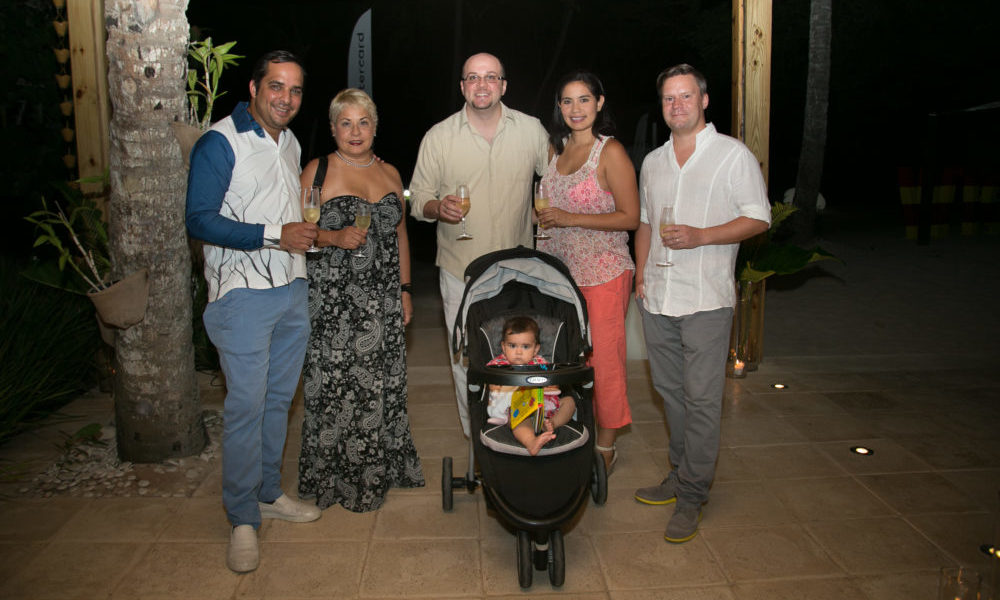 “Flavors of the Word” events in Casa de Campo up the ante on what it means to dine out. The resort has managed not only to enliven, but also evolve the ‘traditional family dinner’ into a cultural experience. Today’s fast-passed lifestyle leaves many of us all too-often without enough opportunities to just sit and enjoy the music. “Flavors of the World” monthly events are a reminder to gather around the dinner table with friends and family and take pleasure in gastronomy. The artful presentation of plates, exquisite tastes, and introduction to new flavors are something to be appreciated and discovered.

This month’s menu featured four chefs: Jorge Puerta, Pablo Pavón, Antonio Romero, and Casa de Campo’s Executive Chef Anthony Masas, who are all graduates from one of the most famous restaurants in the world, elBulli in Roses, Spain. Under the direction of world-class chef Ferran Adriànear, the restaurant came with the reputation as “the most imaginative generator of haute cuisine on the planet,” and a reunion of this magnitude with its chefs was not taken lightly.

Fourteen small plates more than satisfied dinner guests with the quantity and quality of food presented. What felt like even perhaps too-much food was conservative for elBulli – which is known for offering 26 plates in a tasting. We were first introduced to several “small snacks” on a bed of salt, one of which consisted of beer in a lime. Sweet and with a bit of a kick, this we felt was what all drinks on the beach should taste like. Fittingly, the setting was at The Beach Club in Minitas, and as it turns out was one of the last meals guests would have there before the restaurant closed for remodeling.

As with any tasting, one should always be open to trying new things; so, for plate no.2 I happily bit into the “Cresta de Gallo,” which as its name implies was the crest of a rooster. Composed of collagen and cartilage, its unique texture was off-set by a crispy, chicken skin cracker and complimented with a seven spice blend from Japan. The novelty of such a dish for my palate was rewarding and part of the experience one expects to have at “Flavors of the World.” We want to be given something we’ve never had before, be surprised and swept away, and although this dish wasn’t my favorite, I can now say: “I’ve eaten the crest of a rooster!”

By far, my favorite dish of the evening came presented in a sea-shell dish; it was an oyster coated in a traditional Leche de Tigre sauce. With arugula, pickled beetroot, apple and celery, this was the ultimate sweet and flavorful mix of ingredients for summer. On a particularly warm evening, the dish cooled us with its icy texture. A bit of French caviar added to the outstanding combination of flavors and I savored this plate above all the rest.

The enormous variety in dishes at this past edition of “Flavors of the World” did not go unnoticed — plates included smoked sardine, crab, artichoke, rib-eye, and corn with goat cheese. A popularly photographed dish for its beautiful presentation was the “Cochinillo” – fried pig ear with cashew chutney. Its meat was cooked for 16 hours! Late into the evening, many guests could still be seen enjoying the atmosphere at The Beach Club. Over a candlelit dinner, “Flavors of the World Rosas” put all in a dreamy, satisfied spirit. If you didn’t have the opportunity to attend we highly encourage you to go to the next one! Mark your calendars for July 21st for flavors from London; details below.

The following gallery of pictures were taken by Laura Perdomo on Friday, June 16th at “Flavors of the World: Rosas” at The Beach Club:

See more pictures of the plates below, taken by Armando Larrauri of “Flavors of the World”:

FLAVORS OF THE WORLD LONDON