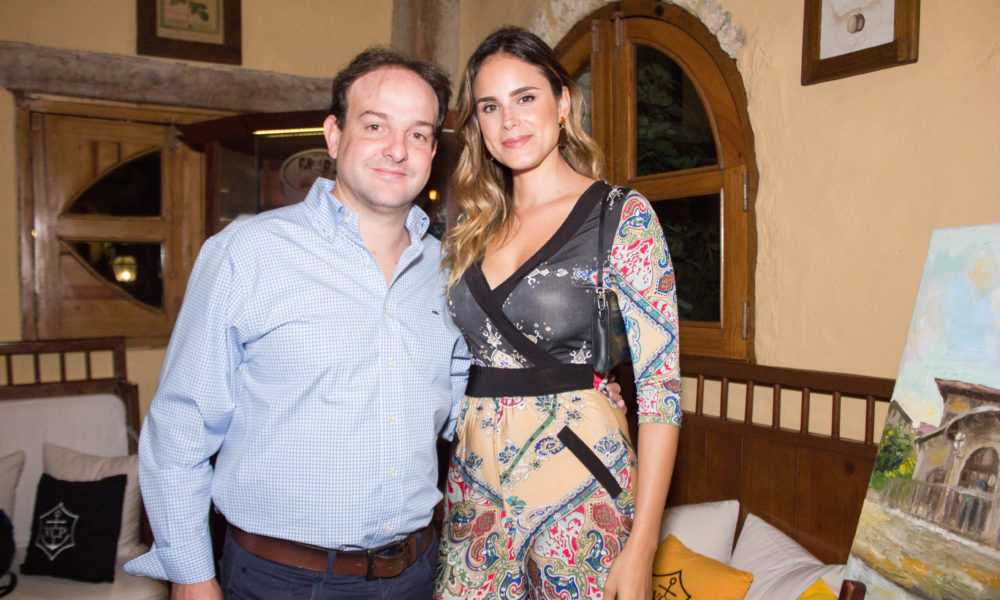 As you might have guessed, Flavors of the World London, the 10th edition in the gastronomy series for the resort, went splendidly this past weekend in La Piazzetta. The oldest restaurant in Casa de Campo was happy to be host again, having previously been the spot of Flavors of the World Italy in August of last year. With the very sympatico Michelin star chef Alyn Williams from London, La Piazzetta came alive with a fully-booked house both nights. Guests dined in a romantic candlelit setting true to Italian style with the chef’s eclectic mix of flavors and regions– some dishes offering as many as 35 ingredients! Rave reviews poured over the Lobster Taco while I quite fancied the Beef Tartare.

Stylish Casa de Campo community members flocked into the restaurant between 8:30-10:00 p.m. on Friday night to first enjoy a welcome champagne and some chef’s surprises not on the menu. These small snacks included Miso Cured Fish served atop a crispy nori and fresh pineapple; arancini – stuffed with Carnarolli risotto, parmesan and preserved truffle; and a savory baked ‘gougere’ pastry with blue cheese and parmesan.

While overall the chef’s menu included influences from much of Europe and Asia, this edition of Flavors of the World wouldn’t be complete without some fish and chips! Alyn’s take on London’s iconic dish included poached grouper with a foamy chip puree. Unique and delicious, it was also served with peas– a classic side dish we learned for fish and chips. One dish that gave nod to the chef’s fresh and healthy vegetarian menu at the Alyn Williams Restaurant at The Westbury was a very light Green Gazpacho soup full of green veggies. Served beside the smoky and spicy tastes of a lobster tail taco with chipotle, this green Spanish soup was a cool and smooth refresher I’d savor on any warm summer day.

Throughout the evening friends could be seen chatting amicably with Casa de Campo’s Food and Beverage Director Charles Keusters who made his way around La Piazzetta explaining each dish’s ingredients and origin. This is always a welcomed-part of the Flavors of the World gastronomy experience as dinner guests can understand more about what’s behind each bite. To complete the meal, two desserts gave guests more than one opportunity to satisfy their sweet tooth. A passion fruit sorbet over espresso was a sweet palate cleanser for a salted caramel flan served with baked apple ice-cream! Each plate had the accompaniment of its own wine, and the evening concluded with a Macallan whisky! All pairings from Flavors of the World London can be found at La Enoteca.

While we hope you had the chance to partake in this edition of Flavors of the World, if you missed it, Buenos Aires is next on the list! Joined by Chef Fernando Rivarola from El Baqueano, which is listed as no. 13 in the best restaurants in San Pellegrino, the event is less than a month away on August 11th! Hats off to Chef Alyn Williams for a remarkable evening for Flavors of the World London; stayed tuned for our one-on-one interview with the chef in our Fall edition of CasaLife!

See more photos of Flavors of the World London in the gallery below taken on Friday, July 21st at La Piazzetta by Laura Perdomo: