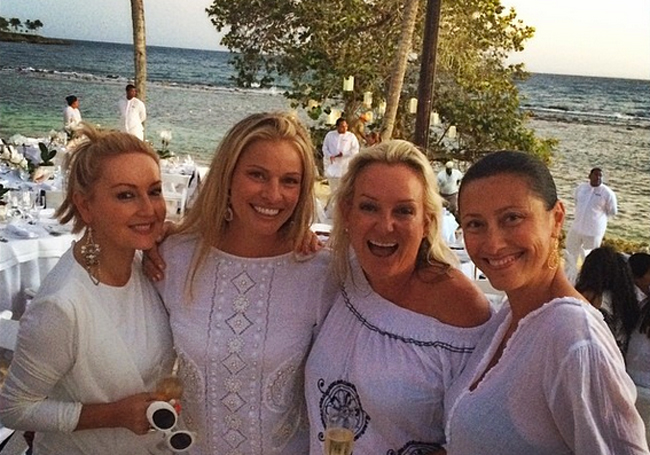 36 year old Kristy who is pregnant with the couple’s second child organized quiet the lavish soiree for “#jimsbirthday” with an even more impressive guest list. Rumored to have arrived in a fleet of private jets to the La Romana – Casa de Campo international airport last Friday evening March 21st were Naomi Watts and her partner Liev Schreiber, as well as British entrepreneur Richard Branson. Meanwhile, as the designer of Hinze’s wedding dress, it’s possible that Dominican designer Oscar de la Renta may also have been in attendance.

The celebrations started with a white party at Minitas Beach, set up in the sand in front of the private beach cabanas belonging to the Beach Club by Le Cirque. From before sunset to late in the evening the VIP guests enjoyed a candlelit BBQ dinner, live music and lots of dancing. Jim Clark kick-started the celebrations with a speech welcoming his guests.

The next evening, following a day enjoying everything Casa de Campo has to offer, such as shooting, sunbathing and piña coladas, the group then gathered in Altos de Chavón to continue the party… In the Chavón plaza outside of the St. Stanislaus church, where Celines Toribio wed with bridesmaid Michelle Rodriguez in 2009 and where Sarah Jessica Parker, as well as Juan Pablo Galavis & Nikki Ferrell of The Bachelor have attended weddings.

From dinner on the cobbles, Kristy Hinze and Jim Clark’s glamorous guests tottered over to the Altos de Chavón amphitheater for a private concert with Jason Mraz. American singer-songwriter, Jason Mraz rocked out in front of the guests who were comfortably accommodated on white sofas in a lounge style setting on the lower steps of the amphitheater. Among the hits performed were Jason Mraz’s most famous song “I’m yours”.

The 3-day birthday bash came to a close with a banquet hosted at Punta Minitas #34. There can be no doubt that this Casa de Campo villa with it’s private beach, dock, and imposing castle-like architecture made the most exquisite backdrop for this memorable occasion.