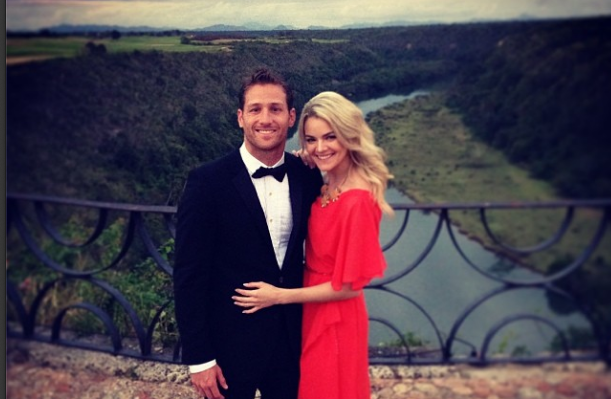 Handsome Bachelor couple Juan Pablo Galavis and Nikki Ferrell were spotted recently vacationing in the Dominican Republic, where they attended the wedding of a friend in Altos de Chavón.

The Bachelor is a U.S. TV show which debuted in 2002, and Juan Pablo Galavis was ‘The Bachelor’ of the most recent season (18), which recently ended with Nikki Ferrell, a pediatric nurse, as the winner.

32-year-old Juan Pablo Galavis, is a former Venezuelan professional soccer player from Miami, Florida, who also took part in the ninth season of The Bachelorette. He is also the first Hispanic bachelor.

The wedding attended by Juan Pablo Galavis and Nikki Ferrell took place on Saturday afternoon in Altos de Chavón at the St Stanislaus church, undoubtedly one of the most beautiful places to marry in the entire Caribbean.

The St. Stanislaus church has also seen the wedding of Celinés Toribio in 2009, a celebration that boasted actress Michelle Rodriguez as a bridesmaid, while in 2012 Sarah Jessica Parker of Sex in the City attended a wedding here. Meanwhile despite rumors, Michael Jackson did not wed Lisa Marie Presley in Altos de Chavón. The couple did visit Casa de Campo in 1994, but their civil ceremony actually took place in La Vega in the Cibao region of the Dominican Republic.

This photo of the gorgeous couple, Juan Pablo Galavis and Nikki Ferrell in Altos de Chavón, was posted on the Instagram account of Nikki Ferrell (@nikki_ferrell) with the caption “Wedding fun in the Dominican Republic with @juanpagalavis and this gorgeous view.”

Looks like they both had a wonderful time in paradise.