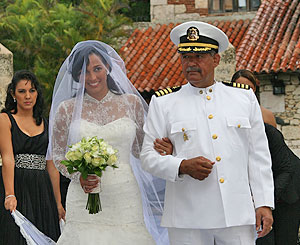 Last Saturday the 18th of April was the wedding day of Celinés Toribio and Giancarlo Chersich. The ceremony, held at the San Estanislao church in Altos de Chavon in Casa de Campo, was due to start at 4pm, but due to torrential rain was delayed by almost 2 hours! The bride arrived for the ceremony in a 1946 Plymouth Chrsyler and was lead down the aisle by her father Héctor Rafael Toribio followed by her bridesmaids, among which was Michelle Rodriguez.

Celinés was wearing a stunning white lace and satin gown made by the Dominican designer Lucía Rodríguez which was adorned by Swarkovski crystals, her father was wearing his Navy uniform and Michelle Rodriguez was wearing a lavender dress and looked as always very natural.

The wedding reception was held in a private villa in one of the most exclusive areas of Casa de Campo, Punta Aguila. The newly weds shared their first dance together with Wason Brasoban singing his famous hit ‘Mi Reina,’ while later the singer Hector Acosta “El Torito” really heated up the party playing, among others, his famous hits “Me voy” and “Emamorado.” A long night of dancing continued until 4am! Leading the dancing was the actress Michelle Rodriguez, who actually changed out of her bridemaids dress and into jeans – so that she could dance more freely!