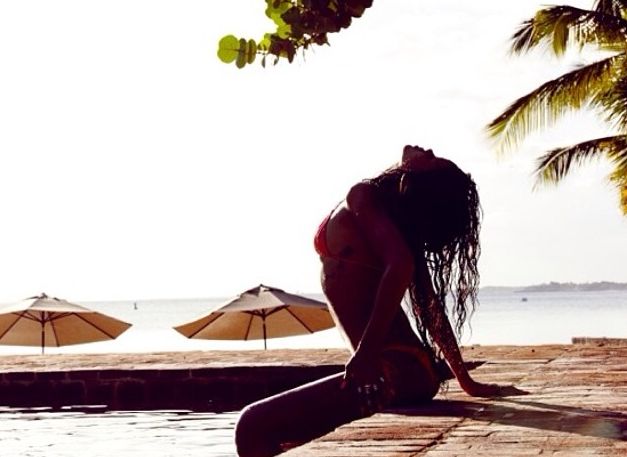 She arrived to the La Romana – Casa de Campo airport last Wednesday the 23rd of October, following which these photos clearly show she came to Casa de Campo for a little rest and relaxation ahead of the concert on Saturday at the Hard Rock Hotel and Casino in Punta Cana.

So where in Casa de Campo was she staying? Punta Minitas #34 – where else? The Casa de Campo villa of choice for visiting celebrities, Punta Minitas #34 has played host to some rather famous and discerning guests – including visiting royals, Kim Kardashian and in fact the entire Kardashian-Jenner family (who filmed a 2-part episode for their hit show “Keeping up with the Kardashians”), and Canadian musician Drake who shot his video “Started from the bottom” within the grounds of the villa.

In these photos posted on Rihanna’s Instagram (@badgirlriri), we can see the international grammy winning pop-star posing in and around the pool in her bikini. The photos were taken by @gomillionandleupold (photographers Steven Gomillion and Dennis Leupold).

Well it certainly doesn’t look like she’s too concerned about our Caribbean wildlife in any of these shots!