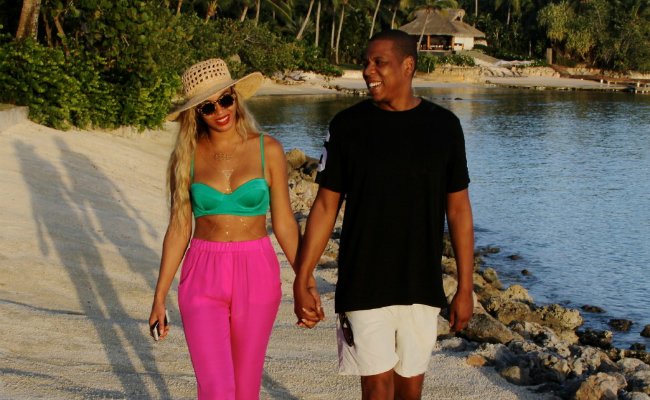 If there’s something Casa de Campo is well known for, in addition to all its amenities, entertainment options and world class beauty, is for being the favorite spot for celebrities to retreat and take a break from all the hustle and bustle that comes with being a star.

Last 2015 was a great year and we received many visits from all kinds of famous people. But there’s a couple that is most notable for keep coming back to Casa de Campo every now and then, time and time again, and that’s rapper Jay-Z and wife R&B singer Beyoncé. Last time they were spotted here was back in April 2014, but something celebrities know how to do — and most of the time get away with — is going unnoticed by people, so they may’ve returned some other time and we didn’t noticed. Just maybe…

But oh well… Speaking of going unnoticed, that’s just what they did this time, as they were seen at Minitas Beach for the amazing Praia New Year Party (photos and coverage coming soon) to which they attended to watch the spectacular firework show and meeting non other than Marc Anthony, who after the amazing Juan Luis Guerra concert, in which he appeared as a guest artist to sing along Juan Luis, got ready and went on to say goodbye to 2015 at Minitas Beach. Unfortunately, we don’t have photos of the trio because they had a huge security ring around them and no touching or getting any closer than that was allowed. But you can still read the story in a note publish by TMZ clicking here.

From athletes, to actors, and lastly, singers! We’ve received a bunch of celebrities in Casa de Campo this past 2015, so here’s a list of those we had the pleasure of welcoming to our caribbean paradise:

Even though it was not yet 2015, last December 31st of 2014, Prison Break star, Amaury Nolasco was at Palmillaso hanging out on the boat next to ours. We also saw Vin Diesel, Dominican baseball stars, José Bautista and Hanley Ramírez — who we’ve seen having a blast at Genesis Nightclub till late hours —, NBA basketball star, Shaquille O’Neal, as well as Dominican film maker, Jessy Terrero and. — And this last Thursday, December 31st, we saw Amaury Nolasco at Palmilla again.

Romeo Santos, model Irina Shayk and again Mr. Marc Anthony touched down in Casa de Campo for the filming of Romeo’s single “Yo También” which features Marc and was directed by Jessy Terrero.

This magnificent Italian Tenor was here back in April for an amazing concert at the Altos de Chavón amphitheater, and decided to stay in Casa de Campo a little while to attend cocktails like the Sunset Jazz Night at Azimut Café and show off his horsemanship at the Casa de Campo Equestrian Center.

This Spanish soccer player, champion of the FIFA World Cup and forward and midfielder for Manchester United F.C., came to Casa de Campo in June to enjoy some well deserved vacations and work with his soccer clinic program for the Americas.

Ex-basketball player winner of four NBA championships and now basketball analyst for the T.V. show Inside the NBA, Shaquille O’Neal, was here at Casa de Campo right after Juan Mata enjoying the beauty and tranquility of paradise.

Nashla Bogaert, one of the Dominican Republic’s most well-known actresses, and her fellow movie-star husband and also member of the Casa de Campo Community, David Maler, spent a weekend here to enjoy the first Juan Luis Guerra concert in June in addition to a lot of other activities.

The Italian designer visited Casa de Campo for a runway of the brand’s men’s and women’s Fall – Winter 2015 – 2016 collection.

American actors Mira Sorvino and husband Christopher Backus, both famous in the film industry, traveled from the United States as special guests at the ninth edition of the Dominican Global Film Festival.

And the two couples made time in their tight agendas to visit one of the most beloved charities in La Romana and indeed Casa de Campo, the Hogar del Niño.

Chicago native Juliet Angus, one of Bravo’s Ladies of London, also known as The London Stylist, came to Casa de Campo on December for the holidays, and has stayed here ever since and, in addition to the New Years Eve party at Minitas Beach, she was seen at the Palapa having a cup of coffee and mingling around with our friend Kyra Montague from Ky-Ra Holistic Living.

So, as you were able to observe, like every year, this 2015 Casa de Campo received lots of celebrities, and we’re sure this 2016 will not be the exception as celebrities have since the beginning preferred Casa de Campo to getaway from all the stress and enjoy this paradise we have the pleasure to call home at least for a couple of days.