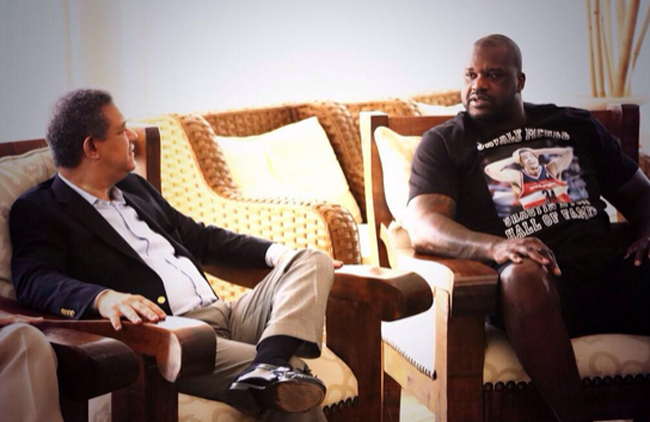 “The Season” in Casa de Campo is legendary, and no time is more popular than from December 26th to January 1st, it’s a time when thousands of revellers from all across the world come to celebrate in paradise, and among those many visitors we always encounter a good sprinkling of celebrities, Vin Diesel, Amaury Nolasco and Shaquille O’ Neal for example.

During his stay in Casa de Campo, Shaquille O’ Neal, considered one of the most dominant players in the history of the NBA, met with former president of the Dominican Republic, Leonel Fernandez, as well as executives of the Central Romana Corporation including Alfonso Fanjul, J.Pepe Fanjul, Ramon Menendez and Eduardo Martinez-Lima.

Following the gathering Leonel Fernandez shared on twitter (@LeonelFernandez) a number of photos of the meeting, with the message “nothing better than talking baseketball with an NBA great”.

Shaquille O’Neal, nicknamed “Shaq” ( /ˈʃæk/ shak), is a former American professional basketball player and current analyst on the television program Inside the NBA. Standing 7 ft 1 in (2.16 m) tall and weighing 325 pounds (147 kg), he was one of the heaviest players ever to play in the NBA. Throughout his 19-year career, O’Neal used his size and strength to overpower opponents for points and rebounds.

Shaquille O’Neal was also spotted in Casa de Campo on New Year’s Eve by Cindy Ramos and Elise Bailey (photo above) at the beach party on Minitas Beach, as well as on January 1st, when it went for dinner at Onno’s Bar in Altos de Chavón (photo right).

Casa de Campo is becoming more and more popular among sports personalities, and especially baseball players, last year alone we were visited by Byron Scott, Joe Johnson, Jimmy Jackson and Alonzo Mourning. No doubt we have the bachelor party of the one and only Michael Jordan to thank for that! [Click here to read about Michael Jordan’s 2013 bachelor party in Casa de Campo.]