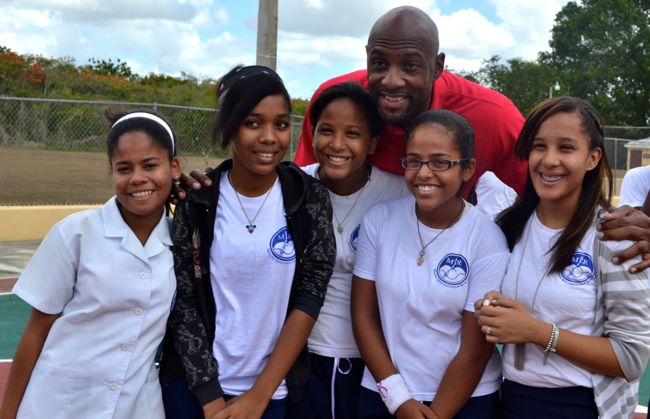 Miami Heat Vice President and ex-NBA all-star Alonzo Mourning visited the Fundación MIR to deliver an inspiring speech – and sat down with us for an exclusive interview on topics ranging from his favorite parts of Casa de Campo to the future of the Miami Heat.

On what has become a series of yearly visits to the Fundación MIR’s Campo Nueva Esperanza, Alonzo Mourning stood before a large group of teenagers from the Fundación MIR, speaking to them on matters of guidance, of faith, of education and of their futures. Upon seeing a majority of the teens express an interest in playing sports professionally, he stressed the importance of other careers, especially in the environment of a professional basketball team, telling them how doctors, therapists, and other employees are extremely important to the success of a team.

After the speech was done, the all-star went out to the Campo Nueva Esperanza basketball court to shoot a couple of hoops with some very excited young students from the Fundación MIR.

On the way back to Casa de Campo, where the basketball legend was all set to play a round of golf on the Dye Fore, he was interviewed by yours truly, giving kind, thoughtful and profound answers to the questions he was asked – answers you can read up on, right here.

@cdcliving: You’ve been to Casa de Campo a few times now, do you have any specific spots around the resort that you would call your favorites?

Well, I spend a lot of time on the golf course, so…

Dye Fore is my favorite. And then the front nine of the Teeth of the Dog, obviously, is beautiful, but by far, the Dye Fore is by far the most impressive one, it really is.

@cdcliving: This isn’t your first time working with the Fundación MIR – what inspires you to come and work with them time and time again, to donate to their cause?

To sum it up… They’re children, you know? When I was a child, I remember people giving me opportunities, I remember people coming to speak to me and helping to try to give me the right direction and the information that I needed to make better decisions. I feel that now I’m in position to do that, I feel that it’s important to try to make a difference from this perspective. I don’t think enough is being done to help young people. It’s not. It takes everybody contributing to persist in this whole process, the process of development of a child. One person can make a difference, but it takes a village to raise a child.

@cdcliving: Out of the talk you gave the kids back there, what can you highlight as your central message, the most important thing that you want them, or anyone in attendance for that matter, to come away with from it?

Let me tell you, the most important message that I wanted to give them was for them to understand that they all have a gift. Many of them want to play professional sports because that’s what they feel is the way out of poverty, or out of whatever situation they’re in. And that’s not true. The way out is education. Education is the antidote for poverty. Just encouraging them, helping them understand that when we won that championship, the players weren’t the only ones who got championship rings, but everybody connected to the organization got rings. The marketing people, the parking people, the team doctors, the team therapists, the trainers on the team, the coach, the massage therapists – all of these people got rings, because it was everyone’s contribution that led to us winning. We didn’t do it by ourselves. I wanted to share with them that there’s so many other occupations out there, other than just being an athlete, that you can be successful at, that you can make a difference in. Taking care of your family [was another important point] as well, but it’s a matter of educating yourself and doing things you need to do, to prepare yourself for a life of stability, a life that enables you to take care of yourself and your family.

@cdcliving: You’ve had what can only be described as an outstanding, amazing, fantastic – whichever superlative you prefer – career, you were the first Miami Heat player to have your number retired, a star of one of the most successful basketball teams in U.S. history, and just this April you were inducted into the Basketball Hall of Fame. Looking back on it all, do you feel you’ve accomplished your life’s goals, or do you have any regrets?

No regrets whatsoever. As far as my goals in life, all my goals weren’t self-centered; most of my goals were focused on or based on a team approach, and I’ve accomplished those goals. When people talk about me being inducted into the Hall of Fame, I say to myself: “Okay, yes, I’m being inducted into the Hall of Fame, but I’m taking so many people’s contributions into it all with me. I’m very thankful for all of them, all of those contributions. You think about basketball, the process that goes into it, especially when you get to the professional level – obviously you’ve got to add a physical ability, but you’ve got to have an inner drive, you know – to want to be successful, to improve the gifts that you have. I have been blessed with that inner drive; I’ve seen guys with a lot of talent, they just tell me they don’t have that inner drive. So, to answer your question, I don’t regret anything, I feel that I’ve gotten the most of my career, and out of life.

@cdcliving: As the current Vice President of Player Programs and Development for the Heat, if you don’t mind me asking, since it’s been buzzing around all over the media, do you have anything to say about LeBron James’s recent return to the Cleveland Cavaliers?

I’m happy for him. He wanted to go home. There’s not much more to say about it because he was very candid with his statement, which spoke to the fact that he’s passionate about the place where he ran, where he cried, where he walked, you know – he described his four years at Miami as the four years of college that he didn’t have. I’m very thankful for him coming to the Heat organization, contributing to the organization. No ill feelings, we’re going to move on, we’re going to continue to build, we’ve got a good team in place – you’ve got Luol Deng, you got Chris [Anderson] and DWade [Dwayne Wade], we’ve got Mario [Chambers] back, Norris Cole, we’ve got a young fella, Shabazz Napier, you got Danny Granger, and Josh McRoberts, so we’ve got a good team. I expect us to continue doing well.

Here we bring you a few more snaps taken during Alonzo Mourning’s visit to the Fundación MIR in La Romana.