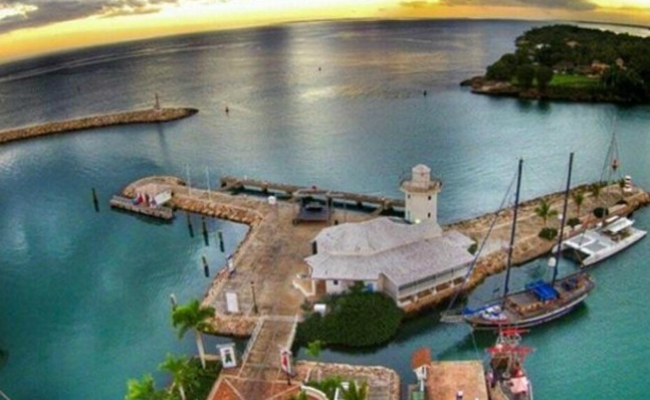 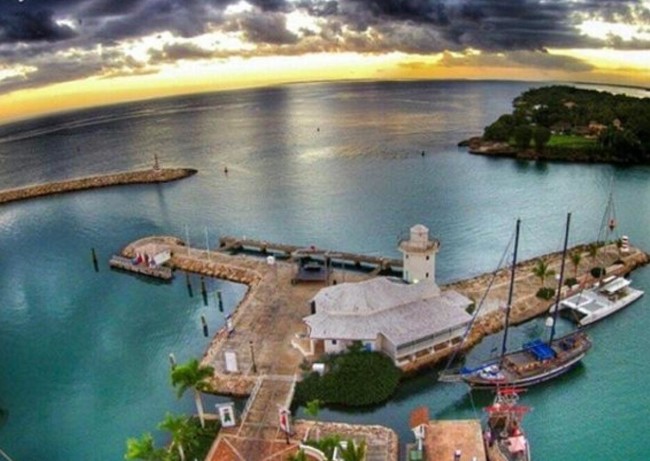 Over the past few days our readers have been going crazy over our flashback of Genesis Disco’s 2006 and 2007 parties and we hope some of that excitement is saved for the opening of the new Genesis mid December. Given that we are in the spirit of reminiscing, how about we take some time to remember the Casa de Campo Marina’s Lighthouse Victory Club?! So many great memories there and so many yet to be made when SBG takes over THIS December!

Victory Club (the lighthouse) was always the IT place to hang out pretty much all the time. The Happy Hours around 2008 were the most laid back and pleasant ones in Casa de Campo. It seems like after that every season would bring with it a new renovation and concept, as was the case in the Winter of 2008, 2010, and 2012. From club, to lounge, to restaurant, we have enjoyed the Victory Club in all its ways. It’s name was even changed briefly to Joy Lounge. Special events, parties and launches at the Lighthouse have always been a hit. There is something just magical about the Marina de Casa de Campo Lighthouse that keeps enticing us to have fun in this beautiful spot.

It’s been quite a while since the Victory Club/Lounge/Restaurant was last open, but the wait is almost over as construction is underway and SBG is about to move in for what promises to be an awesome new addition to Casa de Campo. 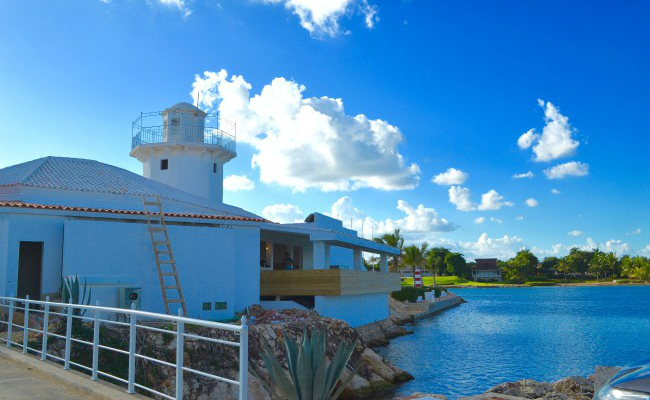 The renovations for the new Victory Club have been designed by Studio Fini and our very own Gianfranco Fini, the visionary and designer behind the Marina Casa de Campo from the very beginning. Architect Fini shared with us his excitement and gave us a sneak peek of the construction site while he let us know what we can expect from the new Victory Club. 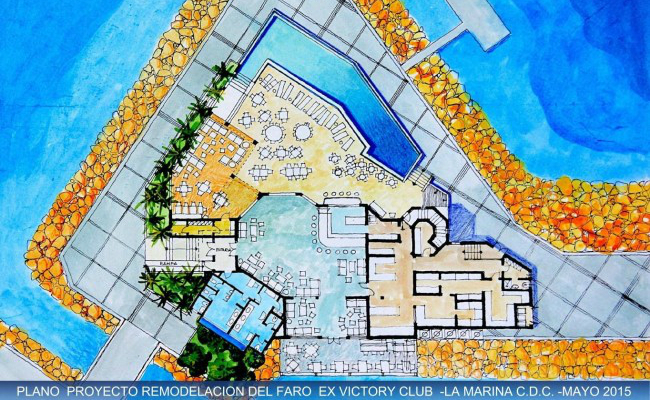 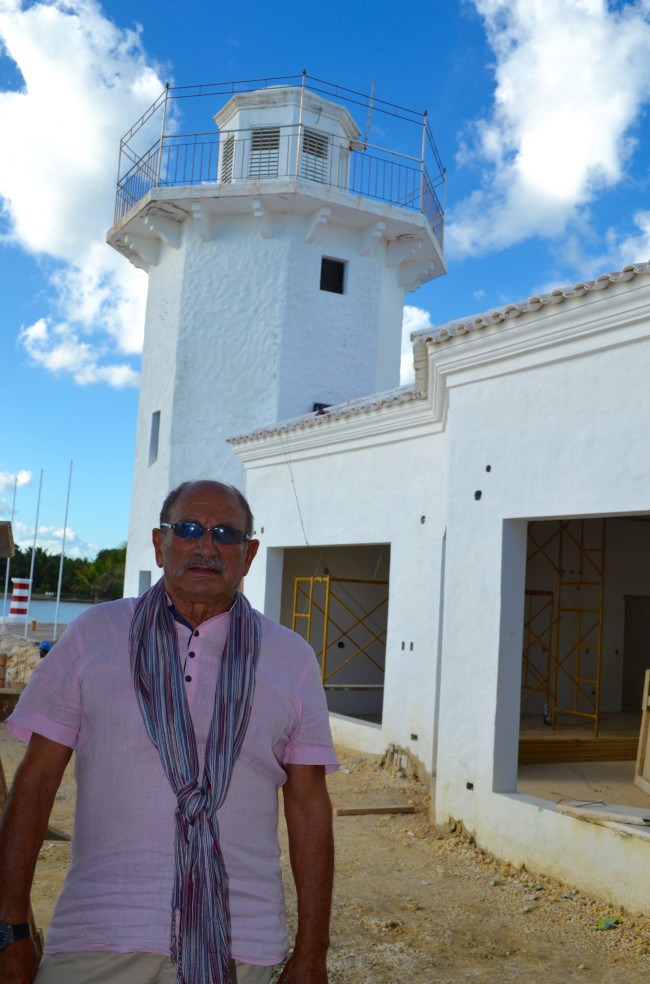 This redesign has been in the works for quite some time and I am very optimistic about the fact that Sophia Bar and Grill’s management of this new club and restaurant will elevate this mediterranean-style space to new levels. I am confident that Casa de Campo residents and visitors will love the club and all the new additions.

Some of the new features the club will have include: a raised pool with glass walls facing the dining and lounging area, lounging areas and table by the pool and jacuzzi, a bar located at the center of the lighthouse, an improved and expanded terrace facing Plaza Portofino, and La Enoteca will also have its own space within the facilities. The lush vegetation in its surroundings with include Washingtonia palm trees for a stylish mediterranean feel. The interior design is being worked on by Sophia’s and will mimic much of its iconic and elegant feel. 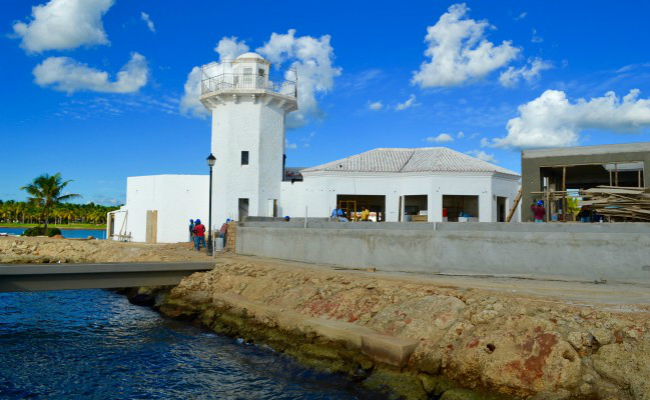 We spoke with Gamal Hache, owner of SBG, who to told us first hand what SBG is planning with its new location in Casa de Campo:

SBG at La Marina will very much be the place to spend these upcoming holidays. We are in the midsts of building a venue where you can enjoy a high profile, entertaining atmosphere with an international menu filled with tapas and specialty cocktails. Just like SBG in Piantini, our location at the Marina will hold the same concept of familiar and top notch ambience. SBG at La Marina will be our second home. I believe it will be the place to be, having such a varied menu and the best of an upscaled lifestyle. Stay tuned… 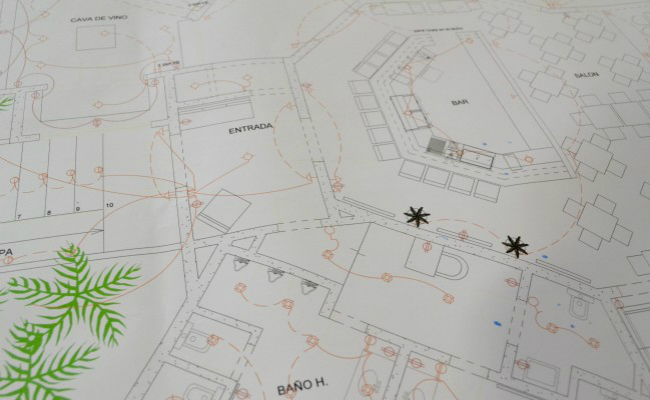 The pictures, layouts and words from Gianfranco Fini and Gamal Hache say it all! Victory Club promises to be a spectacular addition to the Casa de Campo entertainment and dining offering. This new Victory Club, designed by Studio Fini, operated by SBG, and which counts with the support of Casa de Campo Resort and Villas is set to open in December. We can’t wait for the big opening!

Enjoy the following gallery of the beautiful views you will be able to enjoy from SBG at the Lighthouse!