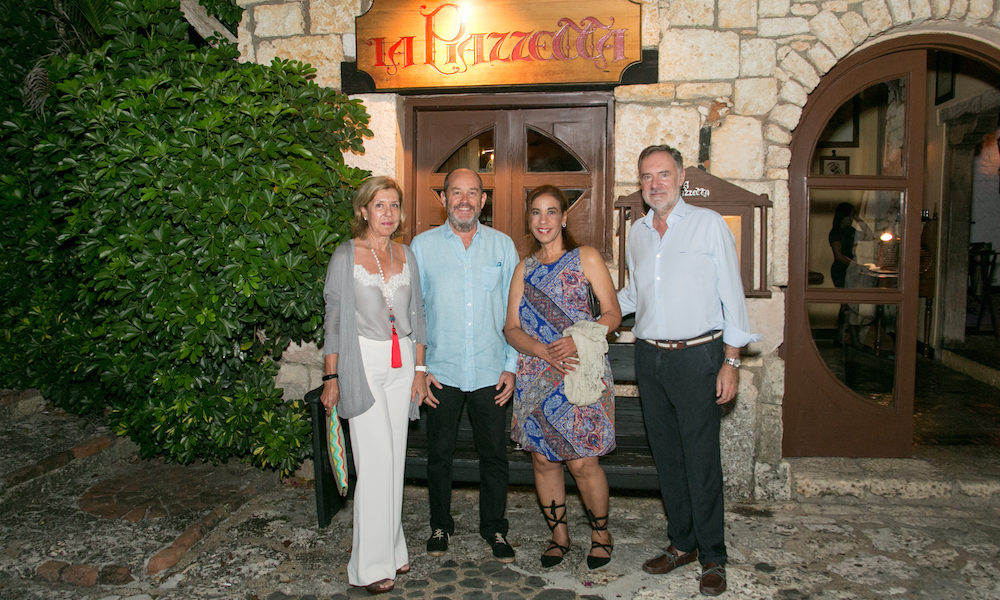 While Minitas Beach Club is under construction, we’ve seen the past three Flavors of the World events take place in La Piazzetta in Altos de Chavón. This past weekend featured the zesty flavors of New Orleans, while August saw the rural ingredients of Buenos Aires and July the iconic dishes of London. We certainly aren’t complaining— La Piazzetta’s idyllic setting brings families together in a quaint, low-lit restaurant whose cobblestones are reminiscent of a beautiful Tuscan village. Inside, tiled walls and stone floors keep things cool from the tropical breeze that works its way up the Chavón river.

It’s here in the Dominican Republic that the warm climate of New Orleans didn’t feel very distant last Friday and Saturday night, and with Chef Tory McPhail’s spicy flavors and Louisiana favorites for his Chef’s Tasting Menu, The Big Easy was all the more present. To begin, guests were welcomed with Shrimp & Tasso Henican to be had with a glass of Moët & Chandon champagne. We were forewarned this dish was spicy, and it came with Tasso ham and Crystal hot sauce, specialities of Louisiana cuisine, along with sweet onions and pickled okra.

Chef McPhail, who hails from the renowned restaurant the Commander’s Palace, which has been a New Orleans landmark since 1893, was sure to bring along some of its classic plates. Friends who’ve visited the restaurant before may be already familiar with their Turtle Soup. Composed of over 25 ingredients, the hearty stew includes turtle meat, eggs, celery, diced peppers, onions, tomatoes, spinach, aged sherry and more. Fun fact, Louisiana happens to be the state that consumes the second most amount of turtle in all of the USA! It’s preceded by Philadelphia, and turtle soup been around for some 325+ years.

My personal favorite of the night also happened to be one of the chef’s. The Foie Gras “Du Monde” came with Foie-Gras beignets, Bourbon roasted apple, and Foie-Gras café au lait with chicory coffee “mist”. A delightfully sweet interlude, this dish could have easily been a dessert. We dipped our beignets into a cup of café for some true Southern comfort food.

Blackened Redfish was the fourth dish on the menu, and was popularized in the late 1960’s by Commander’s Palace Chef Paul Prudhomme. It was so in-demand that it caused the Louisiana Redfish to become an endangered species! To this day they’re not allowed to serve wild redfish, which is why this past weekend’s meals came from off the coast of Texas. The redfish was served with red beans and rice cakes and créole meunière sauce for a very filling combination.

Over each course we sipped on a variety of wines, including Riesling, Pinot Noir, and Cabernet Sauvignon for a symbiotic pairing of flavors that made the dinner well worth its price tag. La Piazzetta’s romantic mood twirled through the air and we listened to a stream of rhythm and blues favorites like, “Hit the Road Jack”. By the time the last plate arrived, I was pleasantly satiated. Rum and coffee lacquered quail was a savory final main plate, partnered with pork sausage piñon and grilled kale.

Flavors of the World New Orleans finished off with a Banana Foster parfait and Brugal Leyenda. With Caribbean rum flambéed bananas severed over vanilla genoise and whipped cream, we were all smiles to end the night. Many who were present in La Piazzetta’s fully booked restaurant noted how delighted they were with this edition, commenting these hearty New Orleans classics were ones they’d love to take with them to the chilly mountains. Chef Tory McPhail also made it a point to stop by tables and thank guests for coming. His amiable persona is a great reflection of New Orlean’s easy-going lifestyle. We hope you enjoyed the resort’s penultimate Flavors of the World gastronomy event and have room in your bellies for the last edition that is next weekend! Chef Marco Canora from New York will be in town November 10th – 12th, details to come.