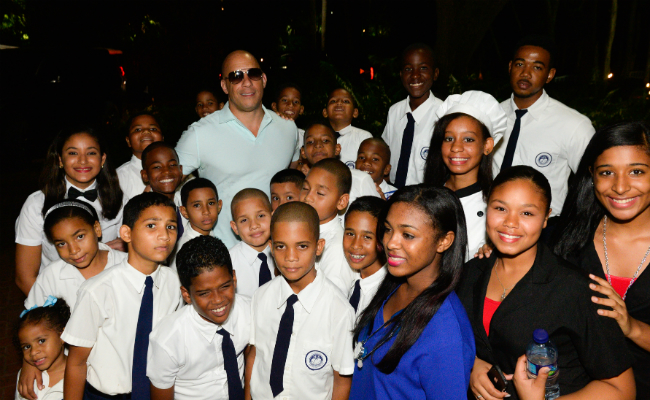 Vin Diesel says “HI!” at MIR Magical Splendor Gala. The lovable actor and producer stood to take photos with the children of Fundación MIR, Lyanne Fanjul, and guests who attended the dinner and fashion show.

Our lucky photographer, Mariana Heredia (on the left), was able to step out from behind her lens and grab a photo with the hunky celeb herself.

Vin Diesel is here in Casa de Campo working on some serious training for his upcoming character, Xander Cage. Just see the hundreds of thousands of Instagram likes he gets daily below and you’ll know what we’re talking about!

Even at 49, there’s no slowing down for the Furious 7 star; a last trilogy of the Fast & Furious films was announced earlier in 2015.

Right before the Gala we spotted him elsewhere around Casa and this is surely not the first time he visits. Check out past articles below for Vin Diesel’s many trips to our little piece of paradise. We hope you enjoy your stay and come back again, Vin!

Vin Diesel joins us for Joli-Day Beach at Minitas!