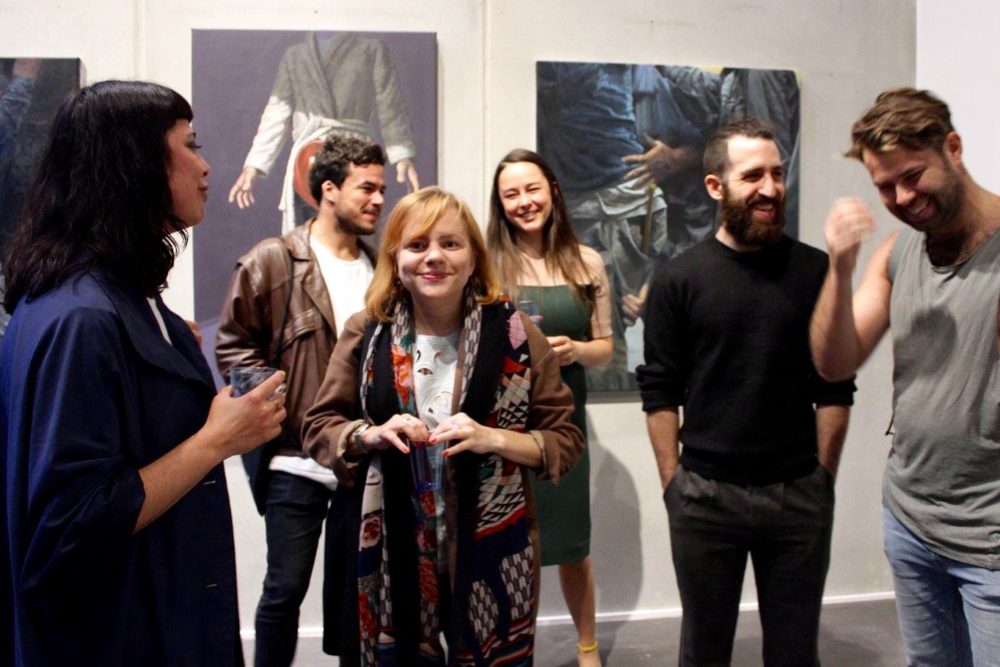 Altos de Chavón’s excellence in art stretches far beyond its Casa de Campo borders as students and artists in residence go on to work in top notch companies, create their own collections, travel and fulfill their dreams. Recently, we’ve recognized the work of Chavonero Gustavo Peña and Davidoff Art Initiative Resident Jimmy Robert, and now are sharing with you a piece by Mariela Sabino who brings to our attention the work of Diego Cirulli, a Davidoff resident in 2012 whom she met during her studies at the school. She herself is a graduate in Fashion Design and has worked with Carolina Herrera and is currently based at Gucci in Paris. Cirulli held an exhibition in Berlin entitled, “Hollow” that Mariela says she couldn’t miss, and is here to share the experience with us:

Altos de Chavón School of Design isn’t only a center where students can pursue their artistic education and work with excellent professionals, it also carries a very interesting initiative called “Davidoff Artists In Residence,” where every year, illustrators, painters, designers, sculptors and a myriad of other talented individuals send their applications to the school in the hopes of spending a year broadening their creative outlook and portfolios. At the conclusion of their stay, their work is shown at The Gallery and is seen by the Casa de Campo community and art connoisseurs of the surrounding regions.

While starting my second career in Fashion Design, I had the pleasure of meeting Argentinean Fine Artist, Diego Cirulli whose most memorable expositions include, “Sand Pit,” “In search of the soul,” and “Porosity.” His installation, “21-105” caught my attention when he presented his work to the Chavón students; it was composed of 21 portraits of women who gave birth in captivity in the Clandestine Center that worked in the ESMA during the military dictatorship in Argentina. He focused on mothers and children who were retrieved and whose identities still remain unknown today. Mounting the images from the ceiling and giving the exposition an almost theatrical feel, his interest in the social, cultural, and historical depths behind his pieces was captivating to hear.

In January 2013, he debuted his expo, “Public Education” that I knew would be a controversial subject in the Dominican Republic as it highlighted school uniforms in a symbolic central focus. The observer would realize that the subject was not just the educational system, but how children can be objectified and abused. The sensibility and precaution in each piece was well thought out and rich in detail, compelling viewers with every single wrinkle of the girls’ skirts as they admired the beauty behind the art and simultaneously questioned the system and what we are doing as citizens to change it. “Diego brings to light a subject which people don’t talk about in this country, that involves education which everyone speaks about. His strategy as a social commentator is amazing and his tactics as an artist have surpassed our expectations. He carries a very sophisticated visual language, which opens our eyes to subjects which we prefer to avoid,” said Raul Miyar, Fine Arts Department Director of the Altos de Chavón School of Design.

After the success of this exposition and his time in La Romana, Diego returned to Argentina to continue making masterpieces. When I realized he would be showing “Hollow” in the BC Gallery of Berlin, I didn’t hesitate to arrange travel from Paris. Diego Cirulli describes this collection as: “Hollow is the picturesque materialization of what is empty and of what remains. Of what speaks whilst being silent and what is being affirmed in denial. What escapes and can only be expressed in aphonics. The appearance and what isn’t apparent to the eye. The presence and the absence. The between and the behind of every image.”

I stood in front of “Hollow,” the focal part of the exhibition and had many mixed emotions as I felt I was being drawn into the painting. I became dizzy from the effect of the painted floors which also gave me the sense of being drained. Accompanying the exhibition was a quote by G. Didi-Huberman that said, “… we need to close our eyes in order to see when the act of seeing sends us to- opens, an abyss that watches us, concerns us, and somehow constitutes us.”

While speaking to the gallery’s associate, Phillipe Barth, I came to a conclusion: In order to decipher the message behind each piece of art, not only do I have to know where the artist comes from, but also where he stands. I quickly understood Cirulli is continuing to emphasize his responsibility to society with his work, stretching on the day-to-day workers and situations that are usual to him. The void in the subjects’ faces, and the space and division between them and the background, along with the darkness in the second planes and tenebrism that accompany the canvases, allows each individual to be the eyewitness while establishing his or her own conclusion and interpretation of the piece. It is in this way that an artist leaves the audience trying to reflect upon the voices that are flowing within the artwork and also keeping the interpretational frame wide open.

Congratulations Diego Cirulli on another outstanding exposition! As a member of the Altos de Chavón community, you are representing us worldwide and we wish you all the best in your upcoming projects! To see more of Diegos’ work, visit his webpage at: www.diegocirulli.com

The following images are provided by Diego Cirulli and of his 2016 exhibition “Hollow” at the BC Gallery of Berlin, and his exhibition “21-105”:

and “Public Education” which debuted at The Gallery Altos de Chavón in 2013: