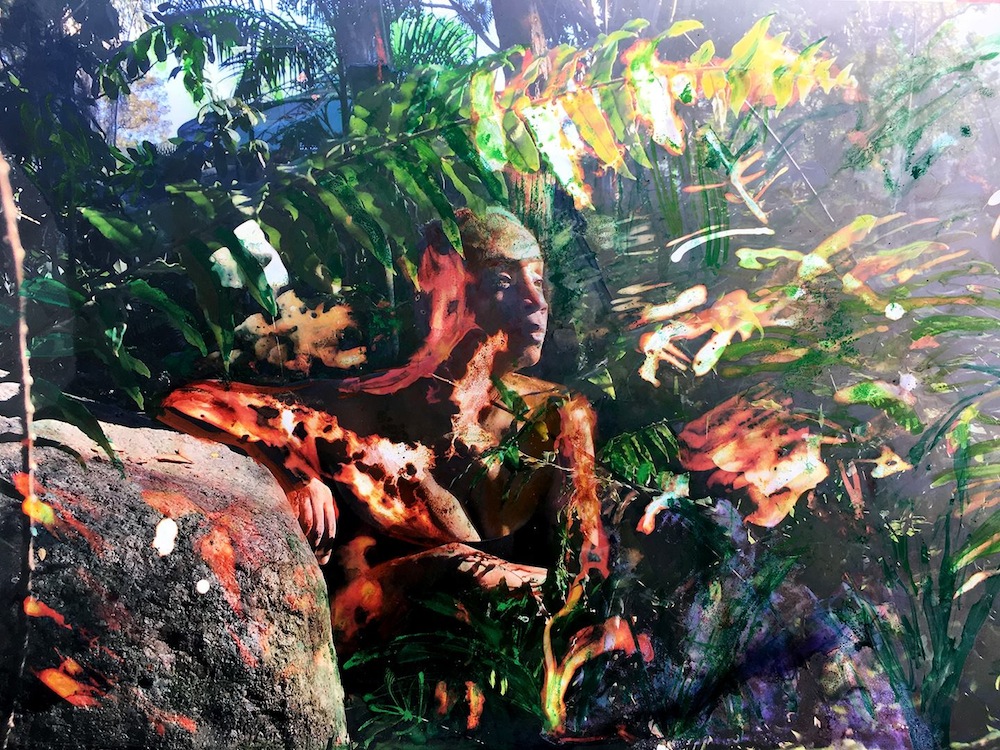 Paolat de la Cruz opens her first solo photography exhibition, “Heridas Abiertas” this coming Saturday, October 1st at 7pm in the gallery of the Jenny Polanco Project in Altos de Chavón in collaboration with Casa Quien. The exhibition will remain open the whole month of October.

Paolat de la Cruz explains that the exhibition’s main concept works with the emotional pain that passes from generation to generation of Dominicans: “racism, the rejection of skin color, the origin of racial groups; denial of origins in a scenario of individual reflection” gave way to this visual expression which mixes different elements in a magnificent way that enlivens these various wounds.

The artist used watercolors and inks in addition to several substances including chlorine, sugar, salt water from the Caribbean ocean, rum, acetone, detergent and thinner on the photos that were printed on matte paper, and each represented a part of Dominican history.

Paolat is a Dominican visual artist, graphic designer and cultural manager who began studying Fine Arts at Lebermatt Gymnasium in Bern, Switzerland. She completed an AAS in Design & Visual Communication at the Altos de Chavón School of Design, an affiliate school of The New School of Design in New York. She has taken courses in Integrated Cultural Design, Design Thinking, Magazine Design, Book Production and UI / UX Design. She was co-director of the cultural and artistic movement, “Revista Lengua” from 2008 to 2012 with Zoilo Pimentel and managed international cultural projects for Brazil, Spain and the United Nations. She has also won the “Premio Joven de la Imagen PhotoImagen”. Paolat also is co-founder of “Collective Pulse” project that supports, trains and works with young entrepreneurs.

Paolat de la Cruz has been selected as finalist with two of her projects to represent the Dominican Republic in the fifth Bienal Iberoamericana de Diseño de Madrid to be held from the 21st to 25th of November in El Matadero Madrid.  See more of her work on her website at behance.net/paolat.

“Heridas Abiertas” was first exhibited at Casa Quien last month as part of Photoimagen 2016, a non profit international photography festival, organized by Fundación Imagen 83 and the Centro de la Imagen. Casa Quien is an art space dedicated to the development of Dominican contemporary art, located in a beautiful house of the XVI century in the Zona Colonial in Santo Domingo. This project, founded by artist Amy Hussein who was recently a guest speaker at the 32nd Altos de Chavón School of Design graduation, serves as a platform that supports and promotes talented emerging artistic. They also have a boutique where contemporary art from both local and international artists is displayed. Casa Quien specializes on One-of-a-Kind products which are produced in a limited quantity accessible to young collectors and art lovers.

The artistic director and curator of Centro de la Imagen, who curated this exhibit as well as previous ones including Portraits and Pilgrims of Altagracia by Yael Duval, Carlos Acero Ruiz,  says the following of “Heridas Abiertas”:

“We have followed the emerging and thriving artistic, Paolat De la Cruz from the very beginning of her career as a visual artist. If anything distinguishes and identifies her work, it is her experimental character which is reaffirmed in “Heridas Abiertas,” her solo exhibition for Photoimagen 2016 shown in CasaQuien. Linked to this year’s theme, “Between portrait and self-portrait: photography and representation” (Entre el retrato y el autorretrato: fotografía y representación), De la Cruz works the surfaces of her photographs with organic products made by slaves on the island – sugar cane mixed with water from the Caribbean Sea. The artist also uses detergents and cleaners to whiten the images, questioning the rejection of much of our population to our African heritage in a country where African genes are greater than fifty percent.

After working her photographs with this substances, De la Cruz completes her artwork with watercolors to emphasize the transparencies on the paper and the skin of the person photographed. The final phase of the process is to re-photograph the original image after the chemical reactions and enhancements, and this becomes the final piece exhibited. A series of unresolved issues of our multicultural identity as a country which for many years tried to dilute our blackness, looking to whiten our race.”

Come and see this incredible exhibition at the Jenny Polanco Project on Saturday, October 1st at 7pm!