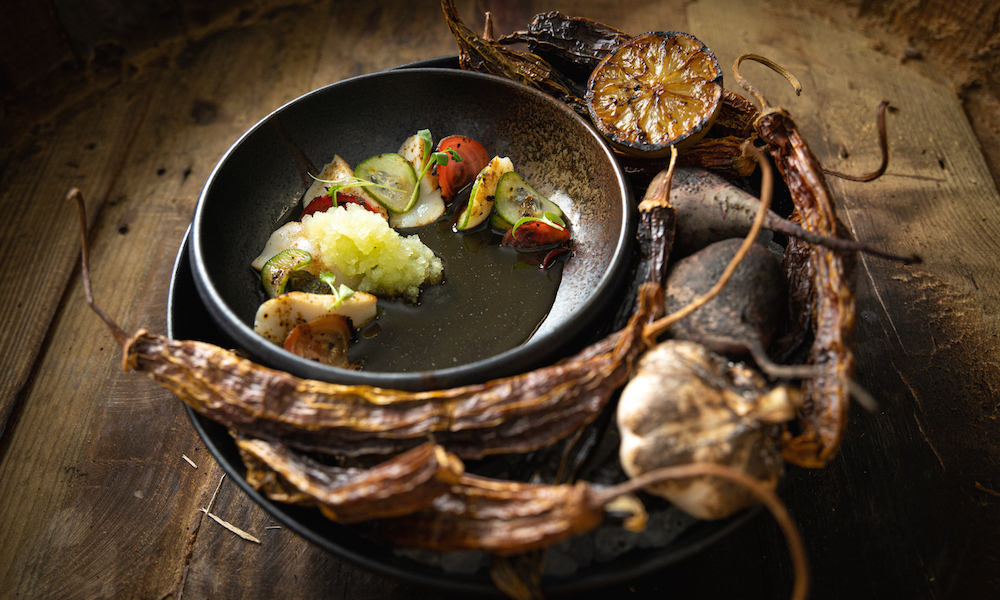 We do not exaggerate when we say that food waste is a worldwide problem. Some estimates say that we throw in the trash around half of the food that we could consume.

This terrible inefficiency imposes additional stress on our planet and affects the entire food chain, from the producer to the final consumer. Haute Cuisine, like Haute Couture, only nourishes the best among the best. The craftsmanship of its dishes, its sophisticated recipes or its elegant staging requires the supreme of a fish without a head or thorns, the most tender leaf of lettuce or a plate of fine porcelain absolutely impeccable. This results in an avalanche of unparalleled waste.

That is why we cannot stop asking ourselves: Is a more eco-friendly, reformulated haute cuisine possible, without so many leftovers or waste?

In Don’t Waste we have prepared a menu accepting products that traditionally do not have a place in the kitchen, taking advantage of the ingredients in their entirety, in an integral way, reusing in favor of a second useful and delicious life, recycling to provide a preparation in new and tasty ways, re-editing to change the focus of vision, in a more imaginative way and using what is traditionally dismissed. All this under the conviction that the prominence in Haute Cuisine is not a tight monopoly of a few.

A commitment to food, the environment, and the imagination. A thoughtful and responsible way of cooking. We invite you to commit with us so that “Don´t Waste” in the Flavors is just the beginning of a more eco, more sustainable way of life.

ACCEPT: We cook with products classified as unusable, with ingredients that are completely discarded, which are not usually taken to the kitchen. We accept these ingredients to break the rules of the valid, the beautiful.

TAKE ADVANTAGE: We cook using the product in an integral way. We take advantage of what is normally eaten and what is discarded, using the ingredient in its entirety.

REUSING: We cook with products that have a second life as they are. We reuse to break the aesthetics of the new, the perfect, the socially categorized as useful and usable.

RECYCLE: We cook with products that, after a reformulation, become valid again. We recycle so that, with a new design, they acquire another gastronomic magnitude.

REEDIT: We cook with products giving them an out of common use. We reissue to give them a new dimension.

USE: We cook to turn what we understand as waste into the main element. We use what is dismissed from a food that traditionally only eats a part.