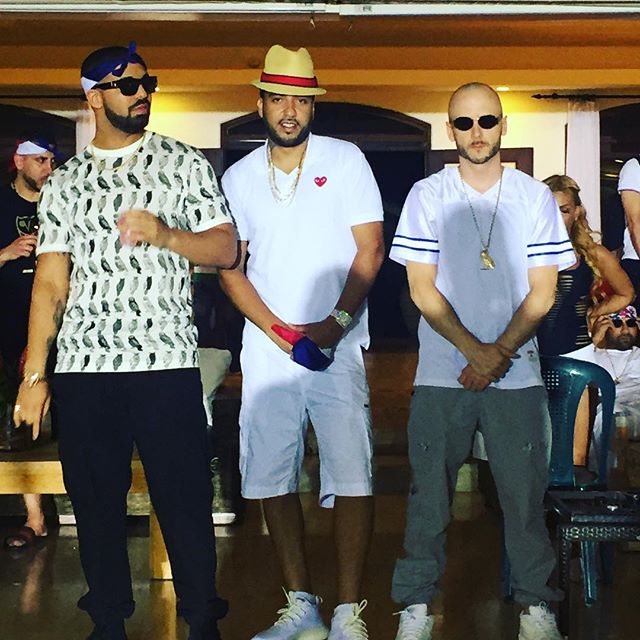 Casa de Campo continues being the favorite getaway for celebrities who want a little break from their busy life and come here to relax. Just yesterday we filled you in on Yankee’s icons Derek Jeter, Jorge Posada, Tino Martinez and Andruw Jones “Boys Golf Trip in Casa” earlier this week. And now Rap superstars Drake and French Montana are also in Casa de Campo filming a music video and enjoying the resort!

Just 2 days ago Drake and French Montana landed in Punta Cana via a private flight and came directly to Casa de Campo for the video shoot of the pair’s forthcoming single “No Shopping”, which was teased by French Montana on his Snapchat a couple months ago and has fans impatiently waiting for it.

The shooting official started yesterday, Thursday, June 17th, in a villa around Punta Águila and it’s being directed by Carlos Suarez, better known as SpiffTV, a young Film and Musical video director of Dominican and Puerto Rican descent, who’s the directorial go-to guy for most of urban artist in the US and Puerto Rico. He’s also the one responsible of scouting Casa de Campo as the location for the video shoot which, despite of us not knowing if it’s going to be entirely shot here, we can assure a great part of it will, since we’ve seen a lot of shooting with lots of wardrobe changes from the stars at Minitas, Teeth of the Dog and Punta Águila.

But you know how rappers live and what they portray in their videos is pretty much their actual lifestyle. And we can assure you that in addition to all the work they’re definitely having a good time!

While Drake, who’s no stranger to Casa de Campo, has kept things “on the d-low”, as he would say, limiting to only sharing a single picture from the video shoot in order to tease the video for the fans, French Montana and Spiff have been sharing several pictures and videos on their Instagram and Snapchat having fun and getting familiarized with our beautiful Casa de Campo.

With a great team of professionals and under the direction of one of the best Hip-Hop video directors, we can expect nothing but a great and high quality video from these two superstars.

Keep in mind they’re still here, so you should be aware while you roam around Casa, as you might run into them! We look forward to artists coming to Casa and you can be sure this won’t be the last time they will come visit us, remember that Drake had already came back in 2013 for his multi platinum single “Started From The Bottom” video shoot at Punta Minitas #34.

Drake, a famous Canadian rapper has just released a video recorded here and Casa de Campo has just become more “rock and roll” than ever!