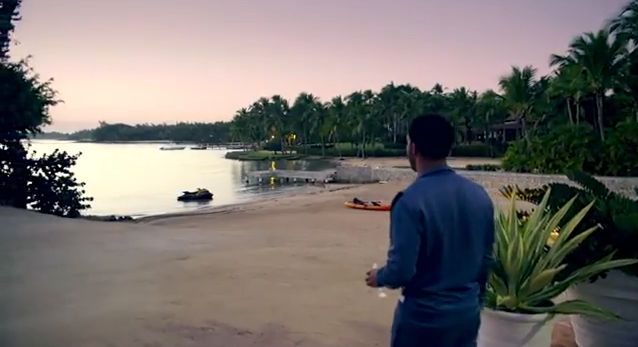 During his stay in Casa de Campo, Drake spent most of his vacation within one of the resort’s most famous properties; Punta Minitas #34, which he had rented for the duration of his stay. This incredible 6-bedroom property, on the market for a cool US$19.5 million boasts a private beach with a breathtaking 180 degree ocean view, distinctive twin turrets with master suites, and extensive water feature that flows throughout the entire open-plan living space -reminiscent of a castle moat. It doesn’t get much more rock and roll than that!

Other recent visitors to Punta Minitas #34 in Casa de Campo were the Kardashian – Jenner family who filmed a 2 part episode for their hit TV show “Keeping Up With The Kardashians” at locations around the resort; Altos de Chavón, Marina Casa de Campo, Teeth of the Dog golf course, as well as inside this stunning villa of course!

And so whilst we were aware of Drake’s visit to Casa de Campo – we didn’t know what he was doing here – until now, when it would seem that as well as indulging in a little R and R, he also took time to film part of the video for “Started From The Bottom”, which since it first appeared on YouTube on Sunday February the 10th has already been viewed more than 300,000 times.

The video, which seems to be about Drake’s rise to fame – from which he “started from the bottom” – features scenes filmed all over Punta Minitas #34, beginning with a golf cart ride up the driveway, to on top of one of the turrets – a spot with incredible views across Casa de Campo and especially out across the Caribbean Sea, as well as on the private beach and in the bar/lounge area. Some scenes – like Drake jumping into the pool fully clothed and on top of furniture – as well as someone scooting up the beach in a jetski, suggest this famous face certainly had a good time in Casa!

The following images were taken from the video for “Started From The Bottom” by Drake:

Cruising up the driveway of Punta Minitas #34

Drake atop a turret of Punta Minitas #34

The bar area of Punta Minitas #34

Enjoy the video, here it is:

Who is Drake?
Aubrey Drake Graham (born October 24, 1986), who records under the mononym Drake, is a Canadian recording artist, rapper, songwriter, and actor. He was born in Toronto, Ontario, and became known for playing Jimmy Brooks on the television series Degrassi: The Next Generation. He later rose to prominence as a rapper, releasing several mixtapes before signing to Young Money Entertainment.
[wikipedia.org]