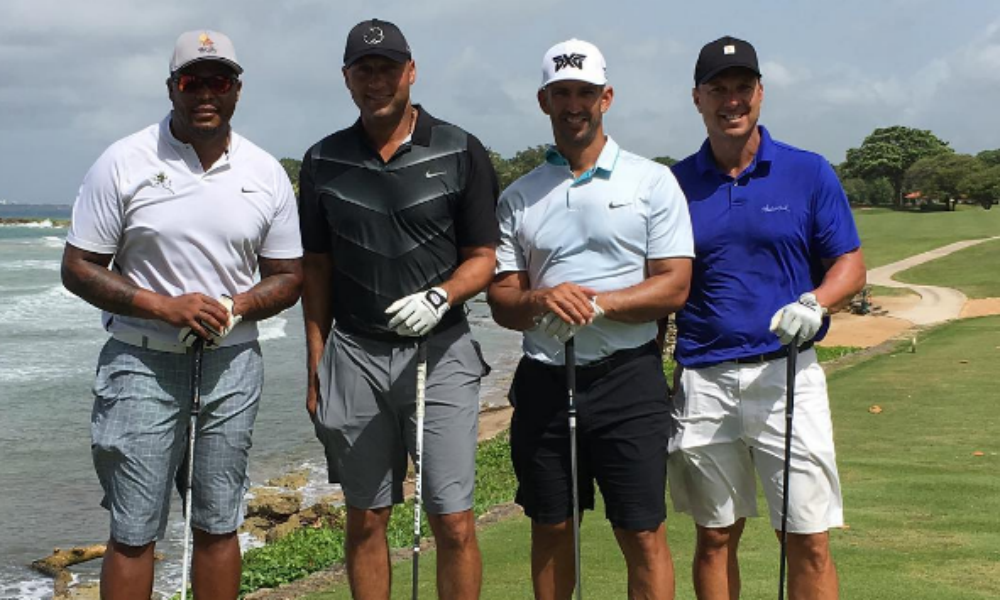 Celebrity Alert!!! A boys golf trip in Casa was just held with an incredible quartet of Yankees icons who were here for a few days enjoying everything that Casa de Campo has to offer! We are talking about Derek Jeter and pals Jorge Posada, Tino Martinez and Andruw Jones!

Both Jones and Posada documented this trip with a few pictures in their Instagram accounts, and we are absolutely thrilled that they decided to come here for what they have labeled as the Boys Golf Trip. It is known worldwide that we have some of the best golf courses in the world designed by Pete Dye, and since baseball players are known to love playing golf as a pastime it is no surprise that they decided to come here.

And no golf trip, is complete without some much needed rest and relaxation beside the pool, with delicious snacks and refreshing drinks. It is also rumoured that is was some sort of bachelor party gathering for Derek Jeter who is known to mary model Hannah Davis in July… but don’t take our word for it… it’s just a rumor!

It is definitely the best way to enjoy your retirement!

Derek Jeter played his last game on sept 2014. In 1992 the Yankees selected Jeter as the sixth overall pick in the amateur baseball draft, signed with the club on June 27th and debuted in the major leagues in 1995. The following year, he became the Yankees’ starting shortstop, won the Rookie of the Year Award, and helped the team win the 1996 World Series. Jeter played in 13 All star games, has 5 world series championships, 5 gold glove awards and was the New York Yankees Team Captain for 11 years. And has hosted the very popular sketch comedy television program Saturday Night Live!

Puerto Rican former professional baseball catcher who played 17 seasons in Major League Baseball (MLB) for the New York Yankees.Drafted in 1990, Posada was originally an infielder before moving to catcher during his minor league career. He debuted in the major leagues in 1995, but it was not until 1998 that he found regular playing time. Posada played 5 All Star games, has 4 world series championships, 5 silver slugger awards and the New York Yankees club has retired his number, 20.

Professional baseball outfielder and designated hitter. He played in Major League Baseball (MLB) most notably for the Atlanta Braves, but also played for the New York Yankees from 2011-2012. In his first Yankees at-bat on April 5, 2011, Jones hit a homerun over the left field wall at Yankee Stadium off the Minnesota Twins‘ Brian Duensing. Jones finished the season with a .247 average, 13 home runs and 33 RBI. He signed in for another season and in the first half hit 12 home runs. After that season he went on to play in Japan and then officially retired from baseball in February 2016.

Martinez Played for the New York Yankees from 1996-2001, and helped lead the New York Yankees to World Series championships in 1996, 1998,1999, and 2000. He also won the Home Run Derby in 1997. Martinez played in 2 All Star games, has 4 world series championships and a silver slugger award. He went on to play with the St Louis Cardinals and the Tampa Bay Devil Rays to later return to the Yankees for one more season in 2005. During his seven years with the Yankees, he hit 192 home runs and drove in 739 runs.