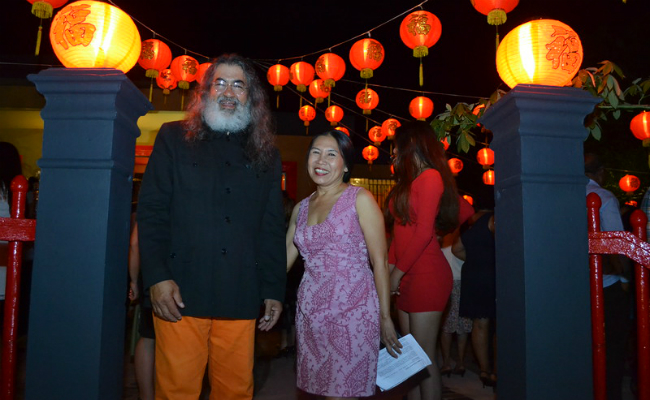 When one hears “Gathering with Close Friends” one expects a small group of people in an intimate gathering. When talking about Chinois’ Re-Opening Cocktail with close friends, we must be clear… all who attended were CLOSE FRIENDS of its owners, Ricardo Bello and Susana Joa, but by no means are we referring to a small crowd. The cocktail to celebrate the reopening of Chinois in its new establishment in La Romana this past Saturday was nothing short of the incredible expression of friendship, support and the love that the Casa de Campo and La Romana community have for Chinois and the family at the heart of it all.

I had the honor and pleasure of being invited by the hosts for what was an incredible night of delicious food, fabulous cocktails, endearing conversation and touching speeches; all of it taking place in Chinois’ new home, on Duarte Street at the corner of Restauracion Street and just 3 minutes away from the Casa de Campo entrance – complete with a safe parking lot right across the street able to accommodate 60 vehicles.

The breezy night and red lanterns flying above the crowd of hundreds of people gathered within the restaurant’s outdoor patio set the stage for an evening of cheer and positivity that bursted from every corner of the new restaurant. I was excited to meet Ricardo Bello Jr., Ricardo and Susana’s son, who was the successful restaurant owner of Mangú, his own Dominican food restaurant in New York City, which so many of us got to try during our visit to the city that never sleeps. The family is so excited about Chinois’ new establishment that they decided to bring him in as a permanent reinforcement in the kitchen to make sure that Chinois is bigger and better than ever!

Just when we thought the night couldn’t get any better, the inaugural ceremony officially began with Dinora Rodríguez taking the microphone and emerging from the crowd to sing Alberto Cortez’ classic “A Mis Amigos” (To My Friends). Because I was so moved by it, I’ll share my favorite phrases below:

Hilda Peguero introduced Susana, who reminded us how this new establishment is the fourth one for their long-standing history as one of the country’s favorite Asian restaurants – it first opened in Santo Domingo’s Colonial Zone, then moved to Naco before making it’s way to the Marina Casa de Campo, where it became a local favorite and community gathering spot for many years. Susana also highlighted how Chinois’ menu (SEE BELOW to read through the whole menu) will continue to include the traditional Chinese dishes that many of us loved from the old establishment at La Marina, its Japanese classics and now even offering a few Thai options. As always, Chinois will continue hosting the special events it was known for, like the Chinese New Year’s festivities.

Ricardo Bello, who is also a fabulous artists and cultural advocate, then proceeded to read a speech which more closely resembled a poem, thanking everyone in attendance and key people who have been there for the family and Chinois for so long (let’s just say the list was too long for me to type it all!). He thanked all in attendance, spoke about true friendship, and was keen to point out that just as the community has shown their unwavering love and loyalty, his family will continue to work tirelessly to continue making Chinois what it has always been: more than a restaurant – a gathering place for friends at the heart of our community.

The ceremony concluded with a blessing from Father Jorge from the Santa Rosa de Lima Church in La Romana. The establishment was then declared OPEN and will be serving lunch and dinner DAILY as of yesterday, Sunday, February 29th.

Things may change, establishments may come and go, some of them may even change their location (like Chinois); but our community is one composed of friends and acquaintances who do not hesitate to support one another and express their loyalty to those who time and time again value community, friendship and hard work over all else. We wish Ricardo, Susana, Ricardo Jr. and the entire family a world of blessings and good luck! We have no doubt that Chinois’ new location in La Romana will be a complete success and will serve the Casa de Campo and La Romana community for many years to come.

We will be seeing everyone there!

The following pictures were taken by Mariana Heredia during Chinois’ re-opening cocktail on Saturday, February 27th in the restaurant’s new location in La Romana:

To take a look at Chinois new menu below: