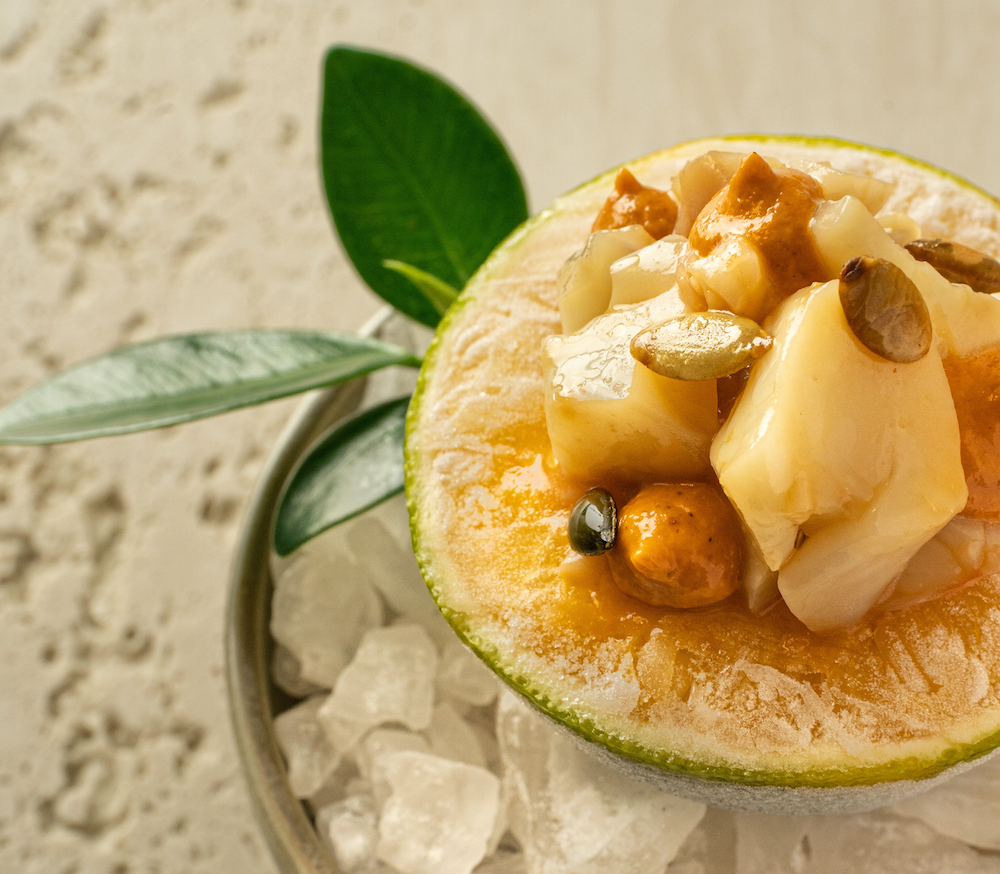 On December 6 and 7, the Flavors appointments of 2019 ended in a big way. In the incomparable setting of La Piazzetta two fantastic dinners were held where legendary ferments became protagonists of a menu of authentic Haute Cuisine.

This time it was the exciting world of the fermented, that cold kitchen capable of transforming the structure, taste or texture of a food, the epicenter of the creative work of the entire Flavors team. These types of preparations, present in all the gastronomic cultures of the planet, are so important that they place the history of fermentation on a contemporary plane to that of humanity. In fact, anthropological theories claim that primitive man learned to channel the energies of bacteria, yeasts, metazoans or protists without even imagining that they existed.

Under this framework Anthony Masas, the Culinary Director of Casa de Campo, prepared an exceptional menu of thirteen times where fermented with such tradition as miso, kombucha, choucroute or smen took the form of extraordinary dishes.

Thus the tepache, the pre-Hispanic drink originally from Mexico, became a refreshing Osmotized Pineapple; the garum, a dressing of mesopotamian origin of great prestige during the Roman Empire, served to spice up a Prawn Skeleton with Roasted Vegetables and Auyama Seeds; The Amazonian massava of cassava made a counterpoint to a Ceviche de Carite based on Persian Lemon Tiger Milk, Puree of Guineo and Banana Chips or the Dominican Mabi acquired another dimension in a spectacular Yun Yun Nitro with Chinola Syrup made by the Anthony Masas himself before the clients.

To round off the experience, a laboratory assembled ex profeso at the entrance of the restaurant welcomed diners, to introduce them lightly to the different ferments that would be tasted in the evening. In short, a dinner that combined the tradition of mythical preparations with the most rabid news. A local proposal with a view to the world. A cultured and extremely imaginative way of cooking.

Micro was made possible by Mastercard and the fantastic pairing proposed by Casa Brugal.

About Flavors by Casa de Campo

In an absolutely creative and innovative way, during this 2019 the Flavors by Casa de Campo have overcome the challenge of creating the most surprising and unique gastronomic experiences. Through six deliveries and under a historical, social, anthropological, environmental, emotional or biological prism, a series of questions were raised that were answered at each dinner, in fine dining format.

An illustrated kitchen of the highest level, perfect pairings or impeccable service have been the appropriate framework to address the complexity of the gastronomic act in all its breadth. A culturization of food lived in person based on unpublished proposals, really “out of the box”.

In addition, the different locations, customized spaces, the collaboration of different plastic artists or the tools, utensils and attrezzo created especially for each occasion have given the Flavors by Casa de Campo its own stamp, a unique identity. Such success has been possible thanks to research, amazing creativity, hard work, effort, rigor and especially the talent of a great team willing to leave the skin in each event.

After the overwhelming triumph of 2019, the sights are already set in 2020 where new concepts, formulations and staging aim to reach an even more impressive level. So are the Flavors by Casa de Campo, gastronomy in capital letters for customers who enjoy eating and thinking.