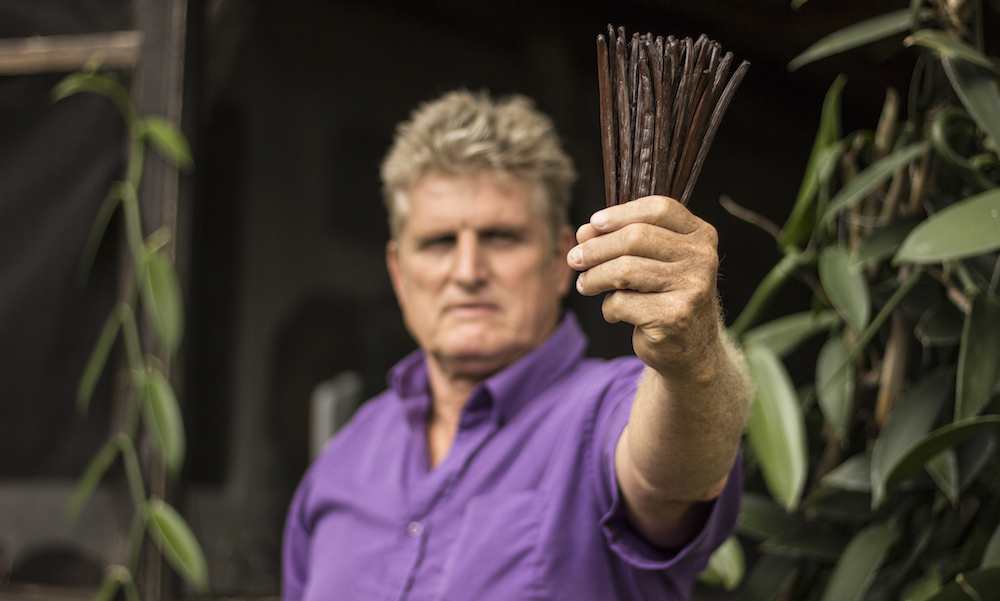 In the verdant tropical mountains of the cordillera septentrional are vanilla orchid vines growing in the soft breeze of the Alizé trade winds. The nutrients provided by the organic forest floor, the Atlantic wind and rain have provided vanilla planifolia, the orchid’s scientific name, with the perfect home. Located on Loma Azul, a small region next to Los Cacaos de Tenares, are thousands of vanilla vines cared for by Chavón artist and teacher Mark Lineweaver. Mark’s wife, Arelis, was raised on Loma Azul and together with their children the family has been learning and practicing the art of harvesting vanilla. 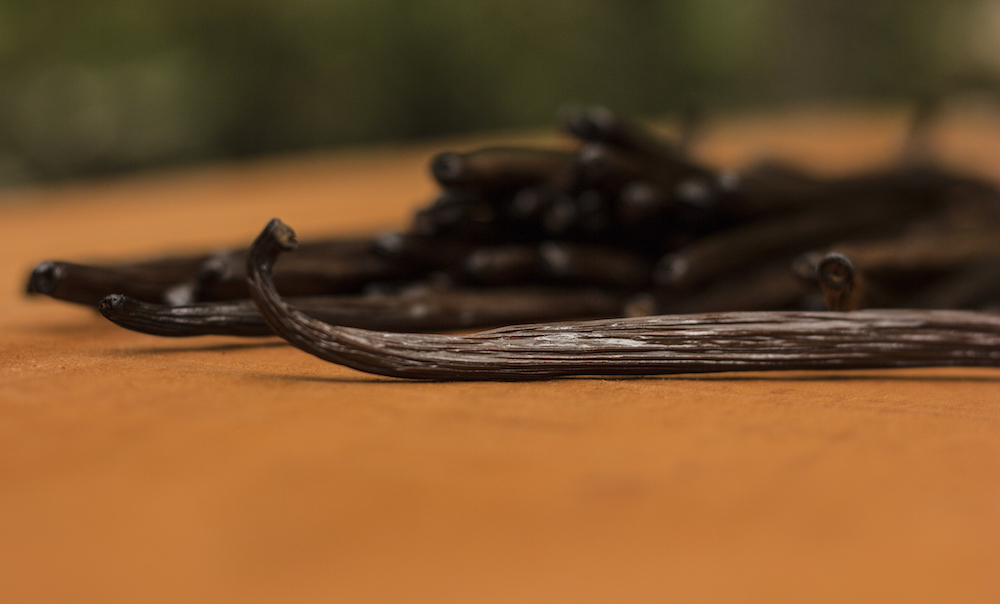 Their adventure started over twenty years ago when Mark planted two vanilla cuttings at the base of a young Guama tree. The project took roots when 116 naturally pollinated vanilla beans—likely pollinated by ants—were discovered between the vines. Not knowing exactly what to do with the green odorless beans, Mark did what any sensible artist would do; he put them in his pickup truck’s glove compartment and promptly forgot about them. Around ten days later he returned to Loma Azul and opened the truck’s door to be engulfed with a strange but pleasant smell. The daily heating and cooling of the truck’s cabin in the tropical sun accidentally replicated the curing process needed to develop the beans aroma—in the crudest of ways. With this aromatic inspiration, Mark began planting vanilla cuttings in earnest. 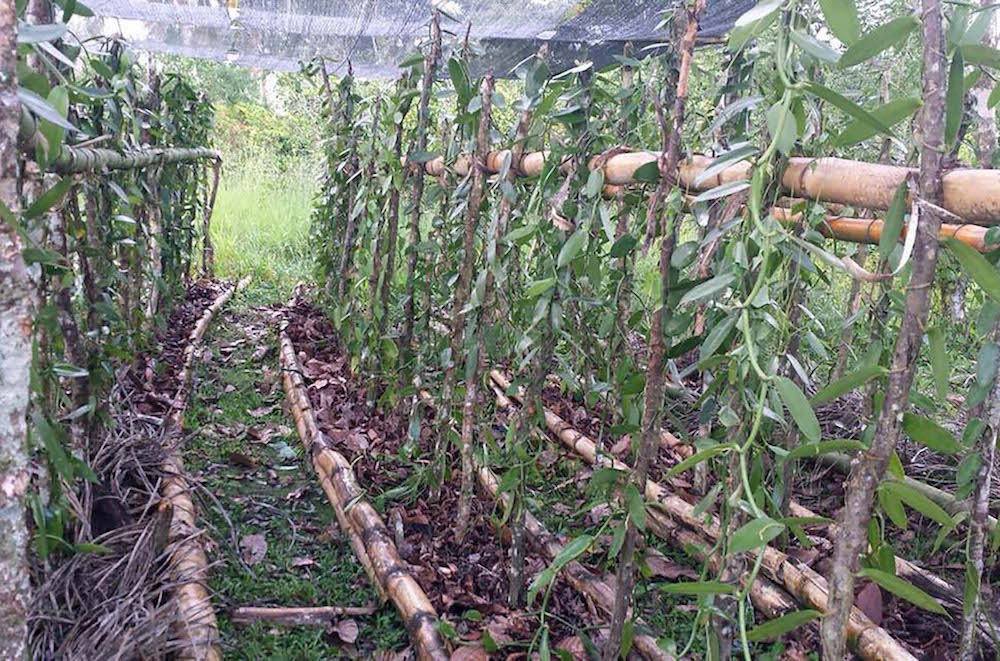 The more than 7,000 vines are growing quickly, but the learning curve has been high. It took two flowering seasons to learn the art of hand pollination. This is a necessary step as the natural pollinator, the melipona bee, lives in Mexico and only manages to pollinate 1 to 2% of the flowers under natural conditions. With the hand pollination problem solved, attention was turned to learning to harvest.  Eight to nine months after pollination, the vines produce a bushel of pods which can be harvested after distal ends have slightly yellowed indicating that they are fully matured. 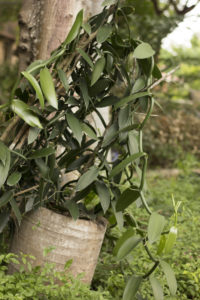 She is there before you letting you touch her silky skin

and at once your fingers know the child of latin lands.

As her feet are dancing across the forest floor her body sways thru the shadowed light.

She breathes the morning’s pearly air and looks at life with eyes of creamy white.

If you touch her with a gentile knowing hand she will bear you fruit that has no equal.

Vanilla is her name and she has dominated the sensual world of aroma and flavor for millennium.

The next steps and most important in assuring the vanilla quality are killing, sweating, drying and conditioning of the pods. The conditioning phase resembles that of aging fine wines so that flavor mature and combine. Chefs and self declared gourmets the world over know that there is no substitute for natural vanilla—it’s too complex. Cured vanilla has over 240 different molecular signatures. With an estimated 95% of commercial “vanilla” products being artificially flavored with vanillin (derived from lignin instead of vanilla fruits), it’s no wonder why the expensive spice is coveted by gastronomic connoisseurs. 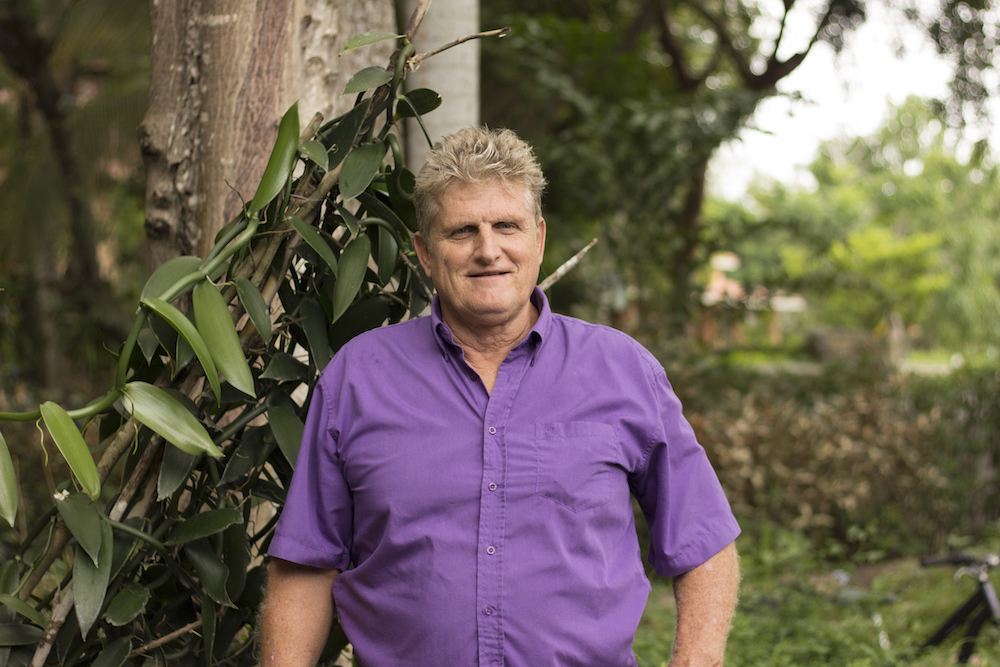 The Blue Mountain Forest Vanilla Project—which started in the Loma Azul in the Cibao region of the Dominican Republic—is now flourishing in Casa de Campo as well. Our tropical Caribbean climate and location within the geographic range where vanilla planifolia flourishes, makes Casa de Campo an ideal location for vanilla orchid growth. In his Altos de Chavón home, Mark closely monitors hundreds of vines growing up and down tree branches in his garden, each with the ability to grow to up to 300ft in length! An artist by trade, Mark has found the world of vanilla to be a harmonious parallel to what comes naturally to him in his studio. 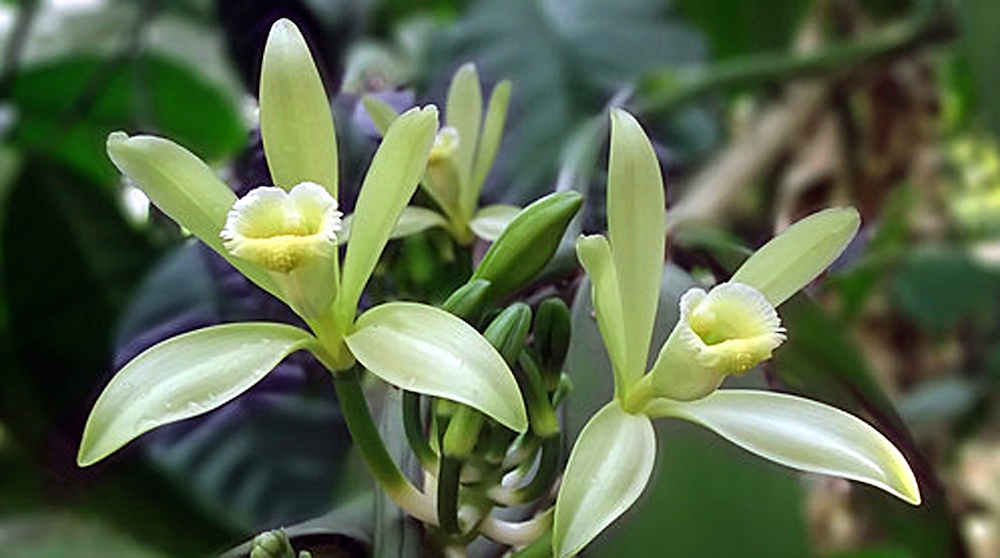 After years of patient practice and learning, the country now produces world-class vanilla, and Casa de Campo has become one of its hubs! If you would like to get your hands on a vanilla planifolia orchid or learn more about this plant and spice, contact Mark Lineweaver at [email protected].

Below we share a recipe using vanilla beans by Chef Cesar Bermúdez who works in Casa de Campo and loves cooking with natural vanilla beans something that he is now able to do thanks to Mark. Dominican Vanilla is extremely interesting and of fine quality. Its sweet aroma is intense and with hints of floral, toasted butter, leather and tobacco leave. Most of the vanilla on the market is harvested in Tahiti. Dominican vanilla is a great alternative as we can be sure it is a fresh product at the peak of its ripeness. – Chef Cesar Bermúdez

Mix the milk and cream in a saucepan and heat to a rolling boil. Infuse the milk mixture with the vanilla beans opened lengthwise. Add the rest of the ingredients to the milk mixture and mix with a wooden spoon until reaching 185*F (85*C). Take the mixture away from the heat. Place ice cream base in another container and cool quickly by placing over an ice bowl. Keep the ice cream base in the refrigerator for 24 hours. Place the mixture in an ice cream maker until reaching the desired consistency.