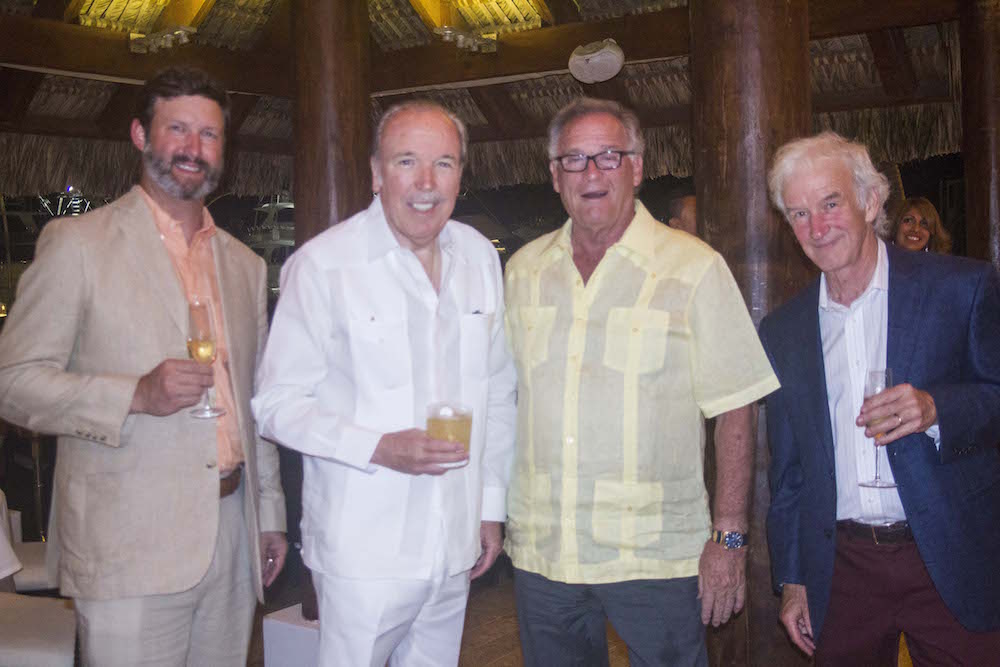 On Thursday April 27th, J.Pepe Fanjul and his wife Emilia hosted an elegant cocktail and dinner party at what Mr. Fanjul soon referred to as their “new clubhouse.” La Casita Restaurant served as a welcome spot for the more than fifty participants of this year’s Casa de Campo Sugar Shooting tournament.

As soon as guests walked into La Casita, they were welcomed by its friendly staff and received tall glasses of bubbly! Waiters passed around various delicious entrées, and what caught our eye was a display of trophies that would be given out later at the awards ceremony following the tournament.

Among the guests, we spotted Gary Salmon, director of the Casa de Campo Shooting Center now running his third Sugar Shooting tournament, and his wife, Judith; Jimmy Gubelmann, who every year donates the “Gubelmann Cup;” Lawrence Berry from Texas, back for his 5th year in the tournament, among many others. On this occasion, Lawrence’s 88-year mother, who happens to have an incredibly keen shot herself, was not able to travel this year for the event and was missed by most of the regular participants.

Although the tournament officially began on Tuesday, the annual welcome cocktail and dinner are traditionally celebrated on the Thursday of the 6-day event. There was an undeniable cheerful and friendly atmosphere present with background music by one of Casa’s dear artists, Eliseo, “the musician of La Piazzetta.” Everyone talked about their day and how they had performed thus far in the tournament. Later on, attendees enjoyed a delicious buffet style dinner supervised by Anthony Masas that included paella, roasted pork, soup, octopus, and more.

Before dessert, Pepe Fanjul rose and welcomed everyone to this year’s event that celebrates the 30th anniversary of the Sugar Shooting Tournament. He talked about the history of the Shooting Center which was designed by Michael Rose, and of the tournament and its beginnings. He also congratulated Gary Salmon for a terrific event and making sure that everything was perfect. Jimmy Gubelmann and Gary Salmon addressed the guests mentioning the beautiful cup that wasn’t on display that night which commemorates the remarkable year.

The Casa de Campo Sugar Shooting tournament continued the following days and through the weekend at the Shooting Center and at Rancho Peligro, and closed with the prize-giving ceremony and dinner on Saturday evening at Lagos Restuarant. Stay tuned for our coverage article on the spectacular night!

The following photos were taken by Luiggy Morales during the celebration at La Casita Restaurant in the Marina: