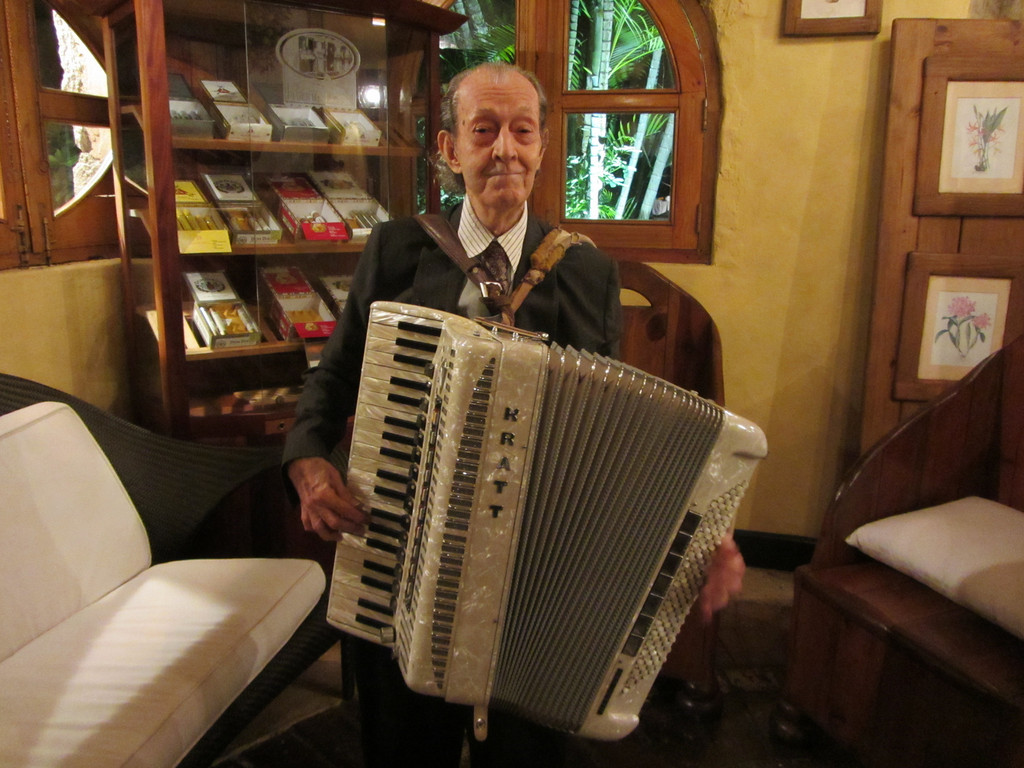 Eliseo, “the musician of La Piazzetta” is as much a part of this classic Casa de Campo restaurant, as the food itself.

From his room to restaurants, from restaurants to hotels and from hotels to Casa de Campo. Once a musician said: “The accordion, an instrument that resists to die” and through the life of Eliseo we can see that.

@cdcliving: Your full name is?

@cdcliving: Wow that’s a lot of names! Why so many?

Well, that is because my grandfather was Spanish. In Spain they used to use three first names and three surnames. But I sign: Eliseo B. M. (Berrocal Minino) to simplify it, because if I don’t, it will take me hours to sign.

Thus begins a conversation with one of  the oldest traditional musicians of the community of Casa de Campo. A humble man with an intellect and a state of mind, which still seems to be walking the Dominican streets in the 50s. Each one of his words a testament to the goodness and great heart that he possesses.

@cdcliving: Were you born here (in La Romana) Eliseo?

No. I was born in the capital (Santo Domingo), Marion’s Hospital. My dad was military and was a rent inspector. My mother was Dominican, and she was a secretary where my dad worked; that is where they met.

@cdcliving: How did you start your musical career?

I have been making music for many years; more than 50 years now. At the age of 11 I started playing, because my cousin, Josefina Puss, had a group of dancers in the Spanish courtyard of the Jaragua Hotel (in Santo Domingo). There were eight to 10 Spanish dancers, and I played the “paso doble” (a Spanish dance). So that’s how I began my musical career.

@cdcliving: What instrument do you play?

I play the “accordion with piano”, many people mistakenly believe it’s a “bandoneon”, but mine has a piano on one side and an accordion on the other side.

@cdcliving: Why the accordion and not another instrument?

At the age of five I went to a lady that sold many accordions, Doña Tara Blandino, and there was a boy who was practicing the accordion, and I told my mother: “mum, I want that instrument”. She told me I had to learn to play it first. Doña Tara heard that and she gave me an accordion, and that’s how I began.

@cdcliving: How did you come to be here in Casa de Campo, performing at La Piazzetta?

That’s another story, I have a lot. The story began this way: in 1975 someone made a hotel in the capital called Hotel Santo Domingo, and I started working there. Later, the same man who helped me get the job at Hotel Santo Domingo, called me again and told me that he had a better job for me at the Hotel Casa de Campo. They essentially gave me a blank check to sign, and I thought to myself: “I’m happy that God is sending me good things”.

I came to Casa de Campo with my teacher Alex and I did a duo performance. From there (the Casa de Campo hotel) we were sent to a very beautiful restaurant which was called El Canario, you know why? Because that was a French restaurant, and we were perfect for it because we used to play many French songs. Then they told me: “Come and see something here” – it was La Piazzetta in Altos de Chavón… Since then 30 years have passed.

@cdcliving: Do you like to play in La Piazzetta?

Oh! This is my home. I always say to people: “Make yourself at home, this is your house.” I’m always welcoming to the guests, I love everyone.

@cdcliving: The people love you a lot, right?

Yes! How you treat people, affects how they treat you. The artist needs to give priority to its public, and to love them.

@cdcliving: Are you considered as an artist?

Well, people says that, not me. For me  I am a man who was born with a virtue of playing an instrument.

Eliseo playing at La Piazzetta in the 1980’s, image by Carol Burke

@cdcliving: Do you have children?

(Hmmm… lol). It is a very good question, because I need to tell the truth, I have six children and eight grandchildren; my family is growing… My wife is from Dajabon (near the border of Haiti), far, far away, right? But we live together in Ensanche La Hoz, in La Romana.

@cdcliving: You’ve been working many years in La Piazzetta, do you enjoy your work?

Look, I’m going to say one thing, if you don’t work with love, it’s not well done. Everything is done with love, love moves all things, moves mountains. If you don’t do it with love, don’t do it. This is my method of doing things.

Oh! More than my life, so much that I arrive to my house (near midnight), and instead of sleeping, I put on the radio station to listen to some music to relax.