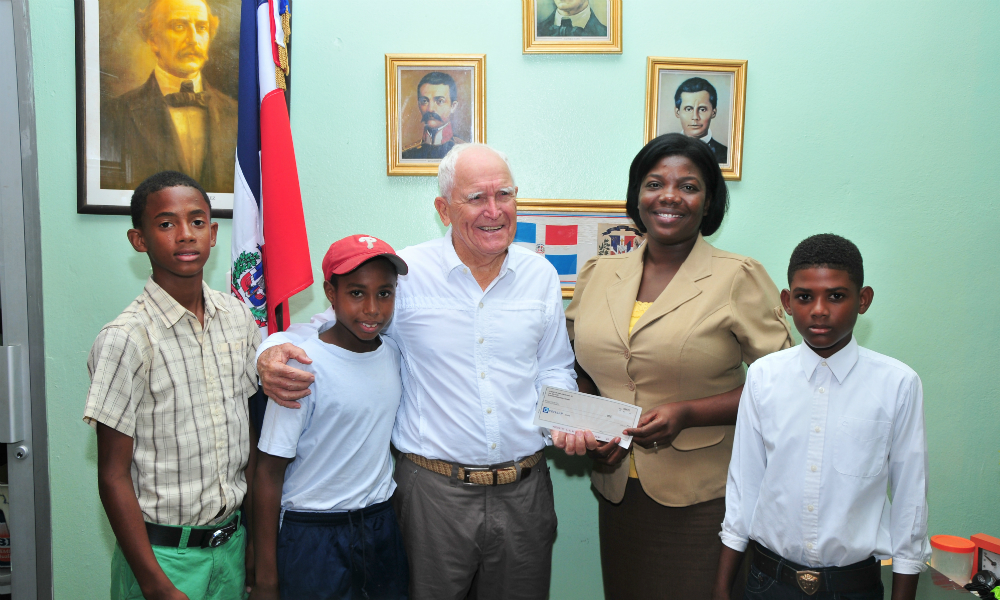 A few months back we announced the 11th Annual McDaniel Tennis Tournament where all donations go specifically to the Player’s Health Insurance, the Ball Boys Scholarship Fund and College Scholarships for two students. This year the McDaniel Family Foundation was able to successfully enroll all ball boys, plus two very special ball girls in school!

The McDaniel Family Foundation, this year celebrating its 11th anniversary, looks to sponsor the education of Casa de Campo’s ball boys through their annual fundraising tournament and have year after year succeeded in sponsoring a growing number of boys (and even a few girls). On July 11th, Mr. Rick McDaniel visited each the of the ball boys’ schools to personally deliver the checks that will guarantee the boys’ education this year. The foundation also sponsored two very special ball girls. These girls are Adonis Siervodedio’s nieces, daughters of his twin brother who unfortunately passed away a while back who also used to also work in La Romana Country Club. The foundation has helped these girls for a couple of years now and has named them, honorary ball girls.

Mr. McDaniel would like to thank all of you for your help in making this years goal a reality: “I would like to extend a gracious THANK YOU for the 10 years of loyal support from our individual sponsors for this very important and wonderful Ball Boys Scholarship Program.”

The McDaniel’s Tennis Tournament played from Thursday, February 25th through Saturday 27th was an excellent source of friendly competition in the name of a wonderful cause. Many from the Casa de Campo community came out to support the McDaniel Family Foundation’s initiatives and see the close matches between the ball boys and instructors of La Romana Country Club and La Terrazza Tennis Club. Read more here.

Thank you to the McDaniel Sponsors!

As is tradition during the McDaniel Family Foundation Tennis Tournament, the community members who support and sponsor the programs aimed at providing better education and healthcare for the Casa de Campo tennis professionals and ball boys met for the Sponsors Appreciation Luncheon this past Wednesday, February 24. Read more here.