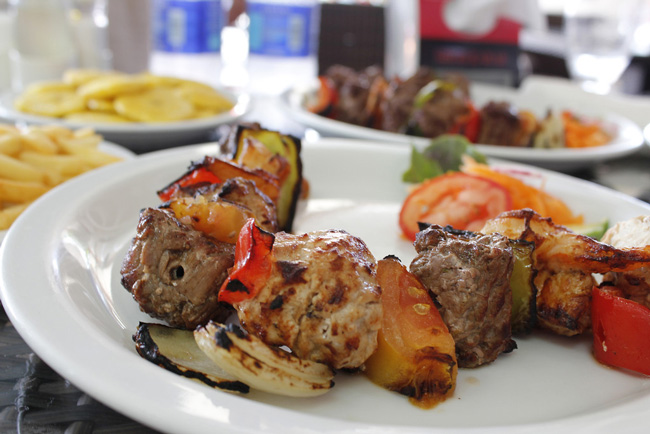 This summer the Casa de Campo resort is celebrating it’s 40th anniversary, but you know what came first – Shish Kebab! And with a 45 year history of excellence, it’s no wonder Shish Kebab is so popular among Casa de Campo and La Romana locals alike.

It is with great sadness, that we must add this update. Shortly after publishing this article, less than a few weeks after we had the pleasure of sharing a delicious meal with Elias Giha, we learnt that he had passed away. Elias Giha, founder and creator of Shish Kebab passed away last week while away in Palestine. We wish his family and friends our condolences in this difficult time.

So how do you review a place that is known and loved by so many? Well we admit it’s not easy, but having heard so much about the delicious Shish Kebab, we were more than willing accept the challenge, refresh our memories and indulge our palates!

Joining us for our review was Mr Shish Kebab himself, that’s Elias Giha, a Dominican originally from Palestine, in the sense that he’s been here in La Romana so long (47 years) he’s as much of a Dominican as all other Romanenses. The story of Shish Kebab dates back to 1969 when Elias Giha, having recently moved to La Romana, was looking for a way to make a living… And that living turned out to be kipes and kebabs! The same two dishes that today, nearly 5 decades later, Shish Kebab is most famous for.

“I sold my ring and my watch for 60 pesos, and used the money to build a basic grill stove,” explained Elias reminiscing on the beginnings of the Shish Kebab legend, “I still have it here,” he adds with enthusiasm. And so here on the streets of La Romana, Shish Kebab was born, as Elias sold Kebabs for 50 cents and Kipes at just 10 cents – and back then, just like today – the locals couldn’t get enough!

With the business going from strength to strength, it wasn’t long before Elias was able to buy his ring back, and less than 10 years later in 1976, he opened Shish Kebab restaurant.

So let’s dive on into the food…

Ok let’s back up and start with the juices. After all who doesn’t love a delicious fresh fruit juice, especially on a hot summer’s day!? Although famous for their kipes and kebabs, Shish Kebab actually offers a great selection of fresh fruits juices – a selection which varies depending on the season. Right now we recommend you try their delicious Dominican cherry juice – made from cherries grown on their own terrace.

No visit to Shish Kebab is complete without at least one kipe. In fact, despite the word “kebab” being part of this restaurant’s name, kipes are undeniably what Shish Kebab is most famous for. Why? Because they’re delicious, the best kipes in the Dominican Republic, and they are such a satisfying way to start your Shish Kebab experience, that is is almost unthinkable, nay nearly impossible, to start without indulging on a kipe first.

So what is a kipe? OK if you don’t know the answer to this question, stop what you’re doing and go directly to Shish Kebab – it’s about time you tried one of this crispy, chewy, bites of heaven!

Ok fine, so what is a kipe? Kipes are fried bites of bulgher wheat stuffed with meat. Interestingly, despite originating from the Middle East, where they are known as “kibbeh”, kipes are actually considered a traditional Dominican appetizer – owing to the fact that they were introduced to the country in the 19th century when a wave of immigrants arrived.

So how should you eat a kipe? “With your hands and with hot sauce and a squeeze of lemon”, Elias told us in a voice that made it sound like any other way was just unthinkable.

There’s no better way to taste everything Shish Kebab has to offer than to dig into their sharing platter, offering literally the very best of Middle Eastern cuisine on one plate; baba ganoush, humus, tabbouleh and of course dolma, the yummy stuffed grape leaves.

In addition to everything being really excellent, most remarkable for us was their insistence upon using the very best ingredients- and where possible -home grown ingredients. For instance, the vine leaves they use are the actual vine leaves they grow in their own yard, harvested and preserved once a year. With that kind of dedication to quality, no wonder everything is so delicious!

One other item included on the sharing platter was a “raw” kipe – yes that’s right a kipe that is not cooked. In principal anything raw sounds a little scary, but in the case of the raw kipe we couldn’t get enough – drizzled with a little oil (as was Elias’ recommendation) – raw kipe is awesome.

The Shish Kebab comes in two mouth-watering, succulent varieties – beef and mixed. We tried both. Philip loved the beef one, which he describes as having “exceptional flavor and tenderness”, adding that “this dish will surprise you with its incredible tenderness and uncompromising flavor that is a result of a family secret recipe.”

On the other hand I loved the mixed kebab with chicken, beef, shrimp and veggies, everything about it was delicious, especially the crispy yet succulent shrimp. For those looking for a little of everything, this is a fantastic dish bursting with flavor.

To bring to close what was a really superb meal, Elias treated us to a variety of Shish Kebab’s homemade desserts, all traditional arabic sweets, that have been part of the Shish Kebab repertoire since the very beginning.

Up first was the sweetly soft “harise” made with semolina, one of their most popular dishes – something locals love to enjoy with their afternoon (and morning) coffee. Next came the mameul baklava literally bursting with walnuts and topped with layer upon layer of crispy sweet pastry, absolutely heavenly. And last but not least, came the traditional cookies, one stuffed with dates and the other with walnuts. Little bites of heavenly sweetness, and the perfect end to our lazy lunch at Shish Kebab.

Throughout our meal we had the pleasure of Elias Giha’s company, as well as his son Juan, who is now working the restaurant full time with his wife. With such an incredible 45 year history it was impossible for us to squeeze the full story of Shish Kebab into this one post, so at some time in the future, we’ll be publishing our full interview with Elias and Juan Giha. While you’re waiting, we recommend you head on down to Shish Kebab and dig in! You won’t be disappointed!