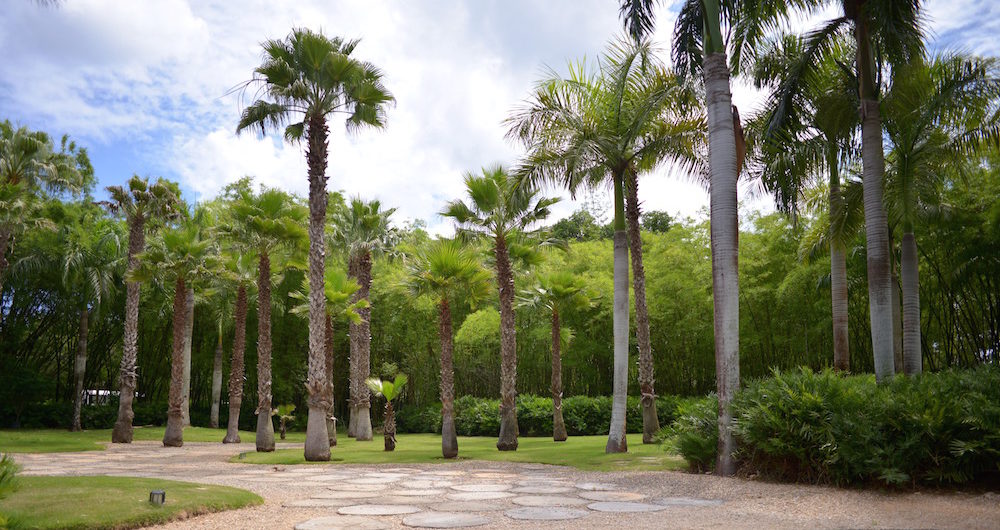 There are more than 2,000 distinct species of palm trees in the world. Approximately 142 are native to the Caribbean, 35 to the island of Hispaniola, of which an estimated 23 cannot be found in any other part of globe, and 15 are listed in danger of extinction. The Palma Real (Roystonea borinquena), seen in the image above in Los Altos, is native to Hispaniola, Puerto Rico and the Virgin Islands, and revered as a national symbol; its palm fronds appear on the Dominican coat of arms, as well as on those of a number of its provinces and the national university (UASD).

The different mutations of palm trees are incredible. Colombia’s national tree, the Quindio Wax Palm (Ceroxylon quindiuense) can grow up to 60m high, the Coco de Mer (Lodoicea maldivica) of the Republic of Seychelles has the largest seeds of any plant, known as the “Love Nut” weighing up to 30kg, while the Raffia Palms (Raphia) of Africa grow leaves up to 25m long – the largest in the world. Meanwhile, here on the island of Hispaniola, the Zombie Palm (Zombia antillarum), an endemic and endangered species has a trunk completely covered in spines. So what else didn’t you know about the humble palm tree? This international symbol for the tropics and vacations has not only played a significant role for humans throughout history, but as one of the world’s most well-known and extensively cultivated plant families, it is also one of the most economically important plants.

Modern palm tree species date back more than 60 million years, and have been used by humans since our existence began. Evidence suggests that the first palms used by humans were the Date Palms of the Middle East more than 5,000 years ago. Across the world, the fruits, leaves, and wood of palms are used in dozens of different ways. Palm sap can be fermented to produce palm wine, a practice which is common across Africa, India and the Philippines, while the fruit of the Areca Palm (Dypsis lutescens) found in China and India can be chewed for intoxicating effects.

Here in the Dominican Republic, palms are widely used in the construction of houses, in fencing and landscaping, and in crafting a wide range of woven products for domestic use and the tourist trade. To the side of the St. Stanislaus church in Altos de Chavón, a Dominican artisan can be found weaving traditional baskets and hats out of the leaves of the Hispaniola Palmetto (Sabal domingensis). This palm was used traditionally by the Taino indians, who used the dry leaves to create roofs for their huts, called bohios. Across Casa de Campo, these thatched palm roofs can be seen at Lago Restaurant and at the various rest stops throughout the golf courses, as well as the gazebos of dozens of private villas. Native to this island, the Hispaniola Palmetto is known as “Palma Cana”, hence the colloquial name “La Cana” for the Casa de Campo main entrance.

Possibly the easiest tree to identify, you may think you know what a palm looks like. However, while most are distinguished by their large evergreen crown of leaves at the top of an unbranched stem, within this plant family exist an enormous diversity in physical characteristics – even among those that essentially look the same. Just take a look around the resort. As you whizz around in your golf cart you will be astounded at the number of types you will spot, and at how different they are. With its long, thin, gracefully curved trunk and coconut fruit, the Coco Palm is easy to identify. The world-famous Coconut Tree (Cocos Nucifera), was introduced to the Dominican Republic in the 16th century, when Christopher Columbus first discovered the island. Meanwhile, the majestic Royal Palm or Palma Real, native to the country, stands proudly erect; thick, solid and very straight. Both are prolific across Casa de Campo; Minitas Beach is full of Coco Palms, while Royal Palms, one of the most ornamentally valuable, are an essential feature in many Casa gardens.

Used extensively throughout Casa in landscaping, a magnificent array of palm species can be spotted at every turn. Surprisingly however, most are not endemic nor even native to the Dominican Republic, or indeed the Caribbean. Many of the species providing the magnificent landscaping we enjoy everyday, hail from far-flung corners of the world; the African Oil Palm (Elaeis Guineensis), the Footstool Palm (Saribus rotundifolius) from southeast Asia, the Mediterranean dwarf palm (Chamaerops humilis) native to continental Europe, the Manila or “Christmas” palm (Veitchia merrilli), so-called after its bright red fruit is from the Philippines and the Mexican Fan Palm (Washingtonia robusta), featured above, which grows up to 30m high are just a few examples.

Also growing in abundance all across the resort are Traveller’s Palms (Ravenala Madagascariensis). Instantly recognizable for their enormous paddle shaped leaves that grow in a fan formation, they are in fact not true palms and belong to the same plant family as the Banana Tree. Also commonly mistaken for a palm tree is the Japanese Sago Palm (Cycad Revoluta). Native to Japan, the largest commercial plantation in the world of this ornamental plant is found in Sabana de la Mar in the north of the Dominican Republic and is owned by Costa Farms, based here in La Romana.

While countless other endemic, native and introduced palm species can be found flourishing throughout Casa, in addition to those already mentioned, some others you may be able to identify include: the Hurricane Palm (Dictyosperma album), Spindle palm (Hyophorbe verschaffeltii), Date Palm (Phoenix dactylifera), Pygmy Date Palm (Phoenix Roebelenii), Queen palm (Syagrus romanzoffiana), Footstool Palm (Saribus Rotundifolius) and the Bamboo palm (Chamaedorea Seifrizii).

In the photos below see more varieties of palm trees in Casa de Campo, taken by Adolfo Despradel: