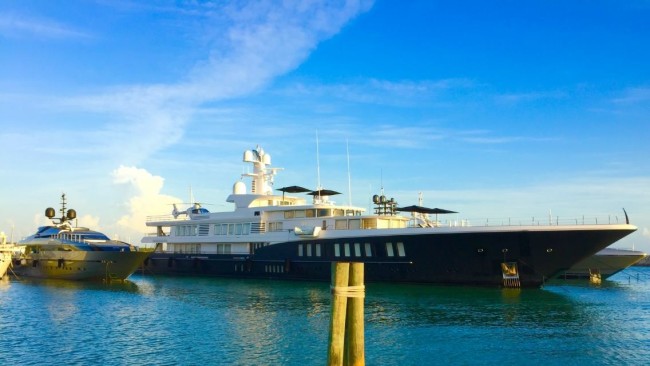 The Marina Casa de Campo is quiet a sight to see right now. Not only is new restaurant Pubbelly buzzing with Casa de Campo villa owners and visitors eager to try their delicious sushi, and renovations are well underway at SBG at the lighthouse, but we also have two megayachts AIR and Ronin currently docked.

Megayacht AIR was built in 2011, and has an exceptionally sleek and elegant exterior with modern lines, a unique matt black steel hull and an aluminum superstructure. She measures 81 meters, that’s 265.7 feet in length and has a beam of 11.6m, and is rumored to have cost a whopping 905 million dollars to build, yes as in nearly 1 billion dollars!

The RONIN, a Lurssen Yacht built in 1993, was initially named IZANAMI, which means “She who invites you to enter,” but was allegedly changed to RONIN after it was revealed that IZANAMI when read backwards reads ‘I’m a Nazi.’ The Ronin is 191.9 feet long, has an outdoor basket ball court and boast space for 2 tender boats, 2 jet skis, a garage for a Hummer, and more.