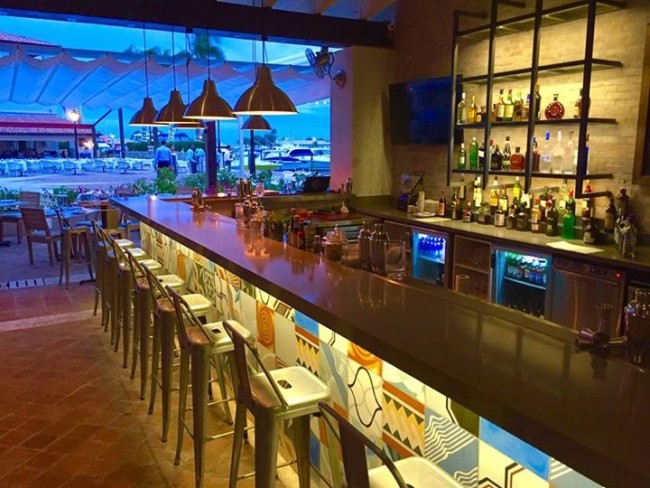 Hello everyone! It’s Rebecca and I’m back in Casa de Campo for the holidays! So last night when I was out at La Morela in the Marina Casa de Campo, rocking my bump at A Night For The Kids, I was thrilled to see Pubbelly Sushi for the first time – and even more excited to see it open.

Now you may be thinking, “hang on a minute, earlier this week I read on Casa de Campo Living that Pubbelly Sushi is opening officially on the 21st,” well ladies and gentlemen that is indeed what we thought too (hence why we published it). In fact, the Marina Casa de Campo’s newest restaurant opened on Tuesday evening, and is open all this week for it’s “soft opening.”

Well it LOOKS awesome. Like really awesome. In the words of my gorgeous Russian friend Maria, “It looks like a swanky restaurant in Moscow.” Now I’ve never been to Moscow, but it really does look very swanky indeed!

The patio area is separated from the rest of the Marina Casa de Campo with a low brick wall filled with flowers and plants, creating an illusion of intimacy and exclusivity. In the same area is a bar decorated with funky mosaics. On the wall behind the bar is a board with the featured cocktails created by Casa de Campo’s new Beverage Manager, Joao Eusebio, all looking almost tempting enough to break a pregnant ladies resolve not to drink!

Inside there’s the sushi bar and a communal table. The kitchen can be glimpsed behind glass and there are funky murals on the wall. Very nice indeed.

What about the food?

Well that I don’t know. First of all I’m preggers so sushi is off the menu, and secondly, I was too busy having a great time not-drinking and not-smoking at A Night for the Kids. That being said there are plenty of pregnancy friendly items on the menu so I will be heading over to give it a try soon – in the meantime if you give it a taste do let us know how you liked it.

Pubbelly Sushi in the Marina Casa de Campo is open all this week from 6pm and will also open at lunchtimes from Saturday. We look forward to seeing you there!