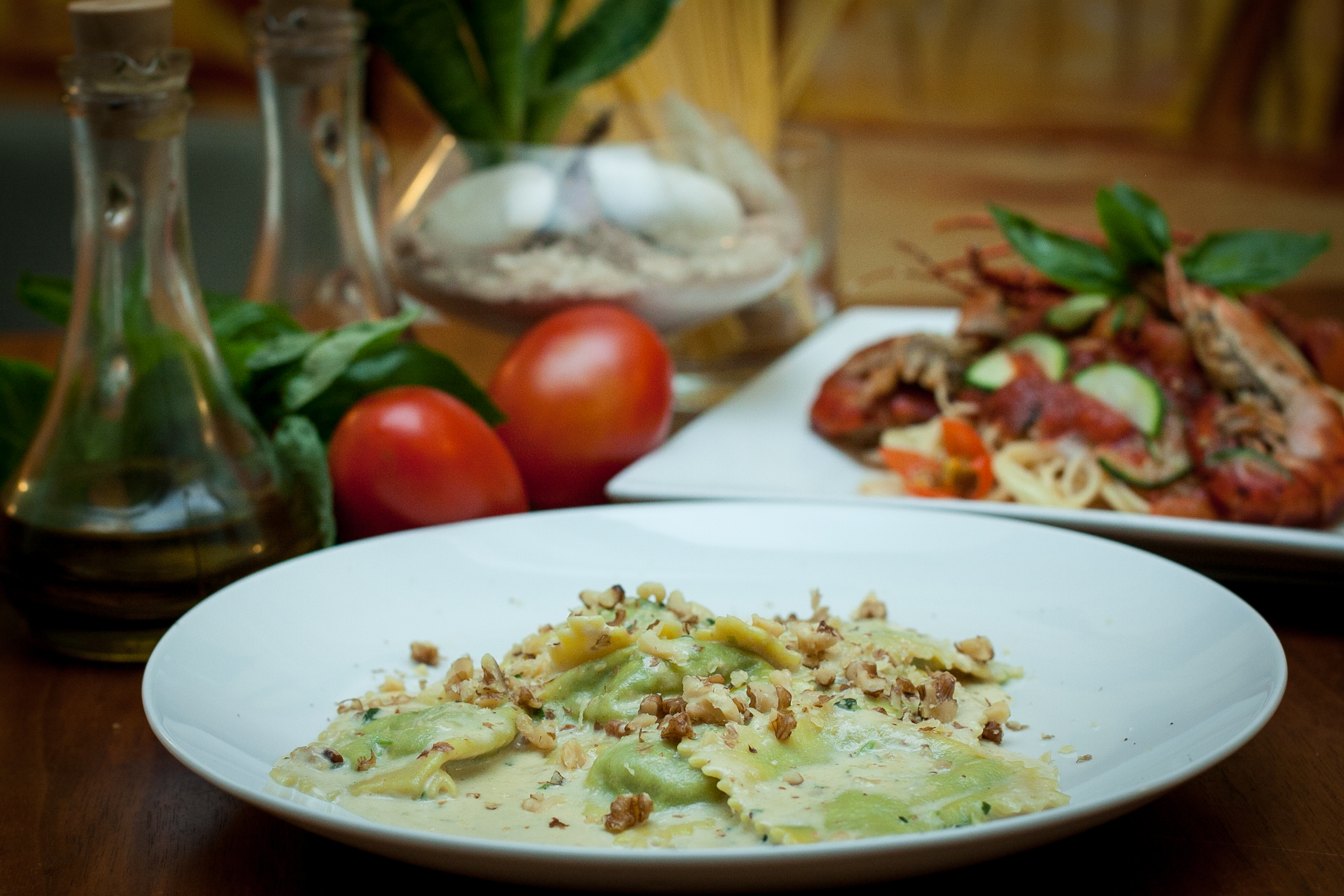 When one of our favorite La Romana restaurants invites us to a private tasting of the new dishes that are now forming part of its permanent, and already awesome menu, we confirm in a jiffy and make sure to bring fellow foodie friends. This was precisely what happened when Lisa and Sandro invited Casa de Campo Living to Restaurante da Lucas, an authentic Italian restaurant in Buena Vista, for a 7 course tasting of new menu items which had us asking for more!

On a warm summer night, under the branches of Luca’s iconic light up tree, with a playlist of great oldies from the 70’s and 80’s, and joined by a full house of guests, we made ourselves comfortable for what proved to be a series of amazing dishes one after the other.

The feast started with a Traditional French Onion Soup served with crusty bread and topped with cheese. Velvety and light, it was the perfect warm starter to open our appetites up for the salad that was served next.

Chef “Chino’s” Beef Carpaccio consisted of a green salad with fresh sliced mushrooms, capers, celery and a lime and mustard dressing, topped with some fresh carpaccio. This is a good opportunity to mention, that being a vegetarian, I made sure to bring some meat-eating friends who jointly reviewed some of the dishes that I didn’t try myself. And while I can tell you that Chino’s salad without the carpaccio was zesty, refreshing and perfect for these summer nights, my meat-eating assistants (Lauren Llenas and Daniel Sánchez, Idarmis and Juan Velázquez, and my mom – Carlota Campos) insisted that the carpaccio was a perfect addition to the salad.

Soon enough, the aroma from the oven started reaching our table… and at Lucas’ that means PIZZA is on its way. But not just any pizza, Lucas’ pizza which is on a whole different ballpark! I honestly believed Lisa and Sandro could not outdo their Pizza Rustica, which is my personal favorite (prosciutto, arugula and tomato – I substitute the prosciutto for mushrooms when I order it), until a sampler of pizzas slices were served, and there, in all of its shining glory, was what the whole foodie gang believe to be Lucas’ best pizza so far… which we named “The One”. A thin, whole wheat pizza with homemade red sauce, mushrooms, olives, sundried tomatoes, capers, smoked scarmoza (cheese), topped with fresh arugula. We could not make up our minds as to if it was the nutty dough and smoked cheese, or the hidden capers mixed with sun dried tomatoes, but we unanimously agreed this pizza was amazing – and we wanted more.

Amid all the excitement with “The One”, we also tried the Del Campesino Pizza, topped with pears and gorgonzola which had a combination of earthy, sweet and light flavors. This is the kind of pizza I would definitely order to share as an entrée. It was just delicious and perfect for those that like the combination of sweet and savory in a single bite.

Now onto the Main – fresh seafood and pasta

After the appetizers, we were ready for the main courses which consisted of 2 seafood dishes and pasta. It is worthwhile to note that at Restaurante da Lucas, Sandro and Lisa only serve fresh seafood, so the seafood dishes vary a lot and you will mostly find what’s in season… if it’s not fresh, they might not have it. That being said, keep in mind that what makes the seafood dishes great at Lucas’ are the marinades and preparation – so be sure to ask Sandro what he recommends for the evening and you are most likely to end up with something delicious.

The first of the main course dishes the table tried was a marinated salmon with fennel and a citrus mousse.

Up next, I proceeded to delve into a state of vicarious excitement, jealousy, and frantic note-taking as the meat-eaters at the table were served a lobster dish topped with what apparently was an epic and SECRET, sweet and sour sauce that had them all going crazy trying to guess what was in it. While some insisted that the sauce that this secret sauce was best mixed in with the seafood salad and steamed vegetables that was served on the side (which was apparently also amazing), while others were sad that they didn’t have more to slather on top of everything that was served from that point forward. We did have to ask Sandro to bring Lisa out of the kitchen to see if she could give us a hint of what was in this secret sauce; but those two would not say anything past “its sweet and sour”! There was no consensus at the table as to what ingredients were part of this sauce – basil, mango, lime, honey were some of the ingredients thrown around as possible culprits of the deliciousness – and Sando and Lisa would not budge… so you will just have to go over there and try it for yourself. Lisa did mention that she tends to include this secret sauce on more dishes every once in a while, so be sure to ask for “The Secret Sweet and Sour Sauce”!

Fresh pasta is one of the staples you have to try at Lucas’ – you will always find homemade pasta and it’s so fresh that it makes “traditional” pasta taste bland! The last of the dishes consisted of fresh Spinach Ravioli with a white nutty sauce. While the Spinach Ravioli have always been popular between Lucas’ clients, the new white nutty sauce just brings the dish up to a whole other level. The pasta was perfectly al dente, creamy, and cheesy… comfort food at its finest.

Time to indulge… sweet treats to die for!

Just when we thought we could not have anything else, Sandro served a beautiful plate of three desserts for each person on the table… yes THREE-FOR-EACH! Mind you, we were so full at this point that we didn’t know how to go about digging into these. BUT, just like I think that good coffee is food for the soul (I welcome you to read my Coffee in Casa article to read about my coffee philosophy), I also believe that there is always room for great desserts. And GREAT these were! The trio consisting of a Coconut Flan, Chocolate Mousse Cake, and a Mini Cannoli were just out of this world. I confess – I ate them all… and so did everyone at our table.

Just like the seafood, Lisa bakes different desserts each day, so while you might find the coconut flan and tiramisu on a fairly regular basis, there is always a batch of something sweet and exciting that Lisa is baking. As a Cannoli fan, I must say that Lisa’s cannoli are so good that Daniel (also a Cannolli fan) shared with me a valuable tip: call Restaurante da Lucas, ask if there are Cannolis on the menu that night, and then schedule dinner around the Cannoli eating feast. Thank you Daniel and Lauren for giving me the secret to happy Cannoli eating!

So there you have it friends, our favorite Italian restaurant is now better than ever with new items on its regular menu. Some of the new menu items that we didn’t get to try include Whole Wheat Pasta with Mushrooms, Gluten Free Pasta a la Norma, Recco Style Foccaccia (cheese stuffed focaccia named after the town where this dish is traditionally from), and much much more. Feel free to browse through the menu (we will soon include the English menu on this article as it is currently only available in Spanish), and be sure to pay Sandro and Lisa a visit to try some of these fabulous dishes yourself!

The following photos were taken by Lauren Llenas during the private tasting of Lucas’ new menu:

Click on the images below to view the menu:

Click on an image below to see a map: