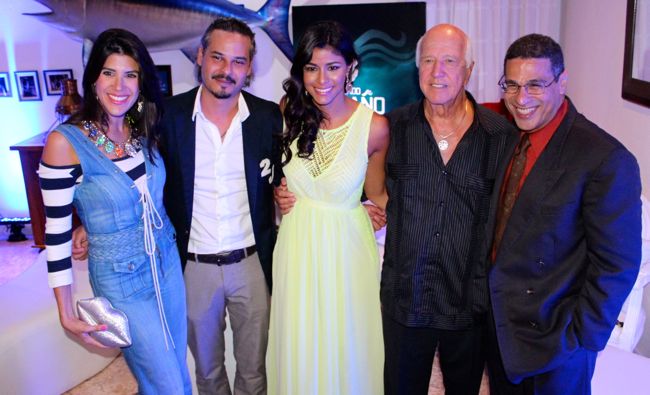 Outstanding. Forget the star-studded after-party and the endless champagne. The real star of the premier of La Extraña celebrated on Friday May 9th at the Marina Casa de Campo, was without a doubt, La Extraña the movie. It was outstanding in every sense of the word.

As the first ever movie to be filmed almost exclusively in the Casa de Campo resort, La Extraña has set the gold standard. La Extraña is not a good “Dominican movie” it is an excellent movie, punto (full stop). The perfect blend of romance, excitement, thrill and surprise. La Extraña is honestly the best movie I have seen for a long time. And I can’t wait to go see it again. (It opens this Thursday May 15th across the Dominican Republic, including here in the Marina Casa de Campo.)

The acting was excellent. Frank Perozo’s portrayal of a man caught between guilt and lust, as a struggling writer called Jean Louis was not only convincing, but also captivating. While Evelyna Rodriguez’s interpretation of the alluring and mysterious Rosa was perfect. Also to be commended is Yorlla Castillo who played Lucy, the jealous mistress of Jean Louis, and Laura García Godoy, as Gaia the wheel-chair bound ex-wife, as well as of course Crystal Jiménez Vicens, who played the pushy, yet efficient secretary.

Meanwhile the direction and production cannot be faulted. It is clear that when executive producer Sergio Gobbi’s more than 40 year’s experience combined with Cesar Rodriguez’s passion as director, as well as the expertise and energy of Leo Proaño as producer, we had a recipe for success.

Sailing to Palmilla aboard an Azimut yacht

And finally the fact that the entire enthralling story enfolded right here in Casa de Campo, over a long weekend within a series of events not dissimilar to those we enjoy on any given weekend in paradise, added a wonderful level of intimacy to La Extraña. Think a night out in the Marina Casa de Campo, a day trip to Palmilla, a round of golf on the Dye Fore and breakfast by the pool. Who hasn’t enjoyed at least one of those activities on a recent weekend in Casa de Campo? For those of us who know and love Casa de Campo, seeing the story unfold literally in our backyard allowed us to connect and identify with the characters as if they really were part of the Casa de Campo community.

When you go to see La Extraña for yourself, and you absolutely must, you’ll also enjoy looking out for a few familiar faces of the Casa de Campo community acting as extras. I was thrilled to spot Ricardo Seijas as a golfer, Francesco Russo as a fellow tourist, Gianfranco Fini buying some wine at La Enoteca, as well as a number of waiters and even Father Victor Garcia, who played themselves.

In addition you will love seeing Casa de Campo shining in all it’s glory! From the resort main entrance to the Casa de Campo hotel, the Marina Casa de Campo, the Yacht Club, the Azimut Cafe, Palmilla and Altos de Chavon, Casa de Campo is beautiful and reflected perfectly as the stunning paradise we know and love!

Congratulations to everyone involved. There can be no doubt that La Extraña will be a great success in the box office when it opens across the Dominican Republic, including at the Marina Casa de Campo, this Thursday May 15th.

NOTE: According to the information we have been given, La Extraña will be available at the cinema in the Marina Casa de Campo for 1 week only.

La Extraña premiered at the cinema in the Marina Casa de Campo on Friday May 9th, where a group of Casa de Campo VIPs, the special guests of Corinne and Sergio Gobbi, mingled with the actors, as well as numerous other personalities from the Dominican film industry such as director Leticia de Tonos Paniagua who worked with Sergio Gobbi and Leo Proano on the movie Cristo Rey, released in the Dominican Republic in December 2013, as well as Nashla Bogaert who starred alongside Frank Perozo in Quien manda? released last year, who also married Casa de Campo’s own David Maler in August 2013.

To open the film, Eduardo Valcarcel, vice president of communications for Orange Dominicano, one of La Extrana’s principal sponsors, Sergio Gobbi, executive producer and Cesar Rodriguez welcomed the audience, introduced the show and thanked the sponsors, among them the Casa de Campo resort, Central Romana Corporation and Azimut.

Following the showing of the movie, the many guests adjourned to the nearby Casa de Campo Yacht Club for a star-studded after-party. Here was our opportunity to meet, greet and celebrate with the stars of La Extraña. More about the after-party as well as many more photos coming later this week!

The following collection of photos were taken during the premier and after-party of La Extraña on Friday May 9th 2014 at the Marina Casa de Campo:

La Extraña – more than 40 years in the making

The original version of La Extraña… “L’ètrangere” was Sergio Gobbi’s first world-wide hit, something which came about because of the support of Charles Bludhorn, the head of the Gulf + Western empire, who in the 1960’s and 1970’s owned owned Casa de Campo and the South Puerto Rico Sugar Company (today the Central Romana Corporation).

Seeing “L’ètrangere”  at the Venice Film Festival, Charles Bludhorn enjoed it so much that right there and then, he offered to buy the world-wide rights to the movie. Thus kick-starting the long and successfully career of Sergio Gobbi, which has just come full circle with the successful release of La Extraña.

As a Dominican movie, La Extraña was produced in Spanish, and will be shown in Spanish nationwide from this Thursday May 15th. However, whether or not you are a native Spanish speaker, as long as you can understand some Spanish, you will enjoy La Extraña, the language is clear and well-pronounced and the story-line is easy to follow. For my part, I was so engrossed in the story it didn’t even occur to me that I was watching a movie in Spanish.

However for our English-speaking Casa de Campo villa owners, there is a version which has subtitles in English, which at some point in the future, we hope to be able to screen for you. We do not yet know how that will work, but we will keep you posted.