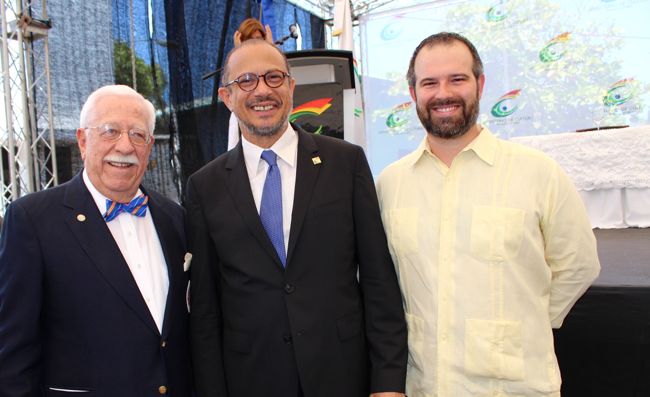 “A negative memory, of embarrassment, of pain”, is how José Antonio Rodríguez, Minister of Culture, describes La Fortaleza jail, the building which once stood where today the Aldea Cultural Santa Rosa de Lima is open.

In the words of Dominican Minister of Culture, José Antonio Rodríguez, this project is an example of how something negative can be transformed into a place “that fosters hope, education, creativity. Changing bars for brushes, bars for songs, bars for dance, bars for crafts, bars for dreams – not dreams of freedom, but rather the dreams of boys and girls living in freedom.”

So what is, or rather will be the Aldea Cultural Santa Rosa de Lima? This ground-breaking project was born out of a vision, a dream had 4 years ago by Danilo Medina, today President of the Dominican Republic. That dream was to create Aldeas Culturales, Cultural Villages, celebrations of what it is to be Dominican, places where the incredible Dominican people have the opportunity to share who they are; their unique and remarkable culture.

Again in the words of Jose Antonio Rodriguez, who is not only a great visionary and speaker, but also a great poet, this is what the Aldeas Culturales are all about:

[If you speak Spanish, please click here to read this article in Spanish – although I’ve tried to accurately translate the meaning and poetry of Jose Antonio Rodriguez’s words, it is much better in Spanish.]

Leading the ceremony was Dominican Minister of Culture, Jose Antonio Rodríguez, as well as Luisa María Ortíz, provincial director of La Romana for the Ministry of Culture, an equally remarkable lady, who actually began work on this project more than 10 years ago.

Back in 2003, Luis María Ortíz, under the guise of her foundation BoMana, created a strategic plan for the development of La Romana as a tourist destination. A plan which she was proud to announce “today, with the opening of the Aldea Cultural Santa Rosa de Lima, is nearly completely fulfilled.”

This achievement was commemorated with a show-stopping performance of “Por Amor” with Jeannette Márquez and Niní Cáffaro. A moment so filled with emotion that not only did the performers get a standing ovation, but many among the crowd were moved to tears.

Also taking part in the ceremony was Amarilis Santana, Senator for La Romana and Jenny Polanco, Dominican Designer and advocate of culture for La Romana.

While what is now open, is just the first phase towards the completion of the Aldea Cultural Santa Rosa de Lima, it is easy to imagine the future success of this project, soon to include a new 4-story building filled with classrooms, as well as a small amphitheater.

Walking around the completely renovated fortress, now painted a brilliant white, there are rooms for offices, workshops, shops, exhibits and more.

Currently on display in these rooms are two remarkable exhibits; “La Romana, historia de un pueblo” (the history of La Romana) curated by Ana Maria Conde, and “Expresiones de Reclusion” (expressions of seclusion), a photography exhibit by Alfredo Esteban depicting the desolate reality of the former La Fortaleza prison. Both exhibits so powerful, you have to go see them. Both are open until October 30th.

Meanwhile there is also a small art exhibit, featuring works of talented La Romana artists, among them Fernando Tamburini and Jorge Silvestre.

Not to mention the collection of arts and crafts. Many of you will be surprised to discover that you have probably never really seen true Dominican crafts. The creations currently on display (and sale) at the Aldea Cultural Santa Rosa de Lima, are remarkable, unique and beautiful. From the Muñecas Lime created from discarded sugarcane husks, to the colorful masks made from coconut, these are the arts and crafts, the souvenirs that will not only inspire tourists to buy, but to fall in love.