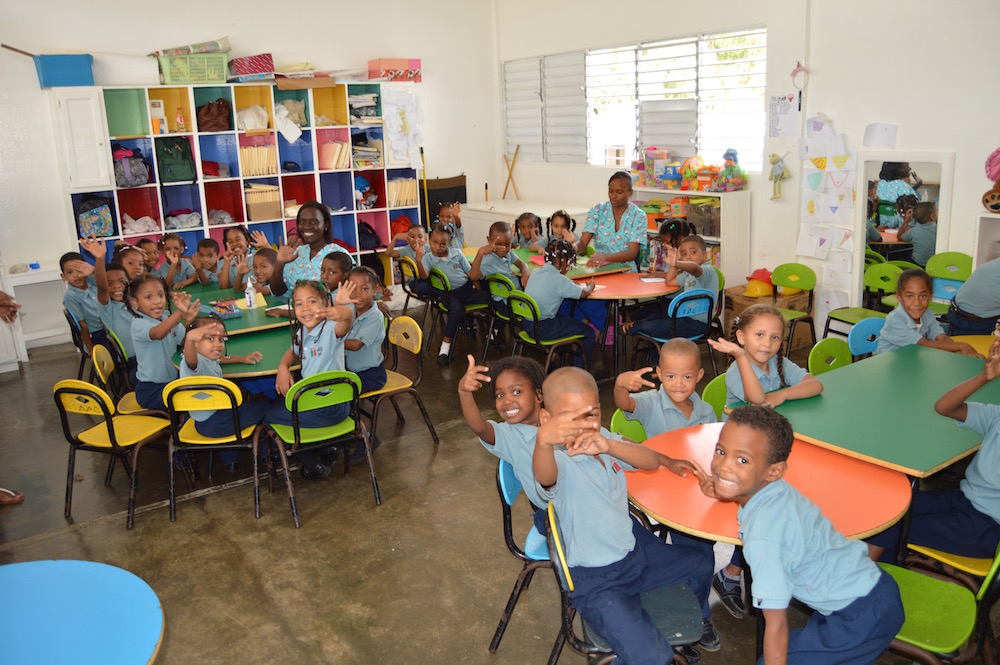 It’s almost time for us to pick up our kits for the Casa de Campo Corre for the Hogar del Niño! With races that sounds off in the early hours of November 27th, there’s no better mode than to be prepared. Proper gear, a great night’s sleep, and carbohydrates the night before certify that we’re ready to hit the track on the morning of. And in the spirit of due preparation, we at Casa de Campo Living are giving you an insider’s tour of the Hogar del Niño with none other than Mrs. Phyllis Berney, chief fundraiser and longtime supporter, to show you WHY WE RUN and why it’s an awesome cause to support!

Earlier this year, the Patronato Benéficio Oriental celebrated its 40th anniversary having first began in 1976 when a group of women came together to help the children of La Romana. Xiomara Menéndez founded the organization from a vision she had for what they could accomplish for the town, and so ensued three entities of the PBO: the Hogar del Niño, the Vocational School, and the Diagnostic Center.

Mrs. Berney and I arrived to the Hogar del Niño around 11:30 a.m. when the bustle of cheerful toddlers were heading to the cafeteria for lunch. In single file lines, children with bright smiles made their way across the school’s wide entryway, sometimes dancing following their teacher’s instruction. “Monday is the hardest day of the week because they haven’t been as well taken care of over the weekend,” Mrs. Berney tells me, “[During the week] they are very happy and look so well fed.” At the Hogar del Niño, the largest of PBO’s divisions, they care for 1,500 children from 5:30 a.m. to 7:30 p.m. and all infants and toddlers are bathed daily with their hair washed to prevent diseases. Afterwards, they are changed into the school’s uniforms which handsomely consists of navy slacks and polo shirts, each a different color according to the grade level.

The students pay just 8% of the cost to attend the Hogar del Niño while the charity picks up the other 92%. It cost $80 a month to put a child in school, and as a pre-requisite their parents must work so that there is no one at home to care for them. Since the school has such a waiting list, it’s imperative to accept those who need it most who are living in the poorest conditions. In 1996, Mrs. Berney started the Adopt a Crib program, taking thirty friends to see Xiomara Menéndez’s efforts at the PBO, and asked each to donate $1,000 dollars. They all gave! The second year, she raised $96,000 and it was Papo Menéndez, Xiomara’s husband, and one of the founders of Casa de Campo and sugar mills in La Romana, who matched the funds 100%. “What’s great about the PBO is that the people who are most involved are the ones supporting it.” This year, the charity met a landmark when they raised over 1.3 million dollars! Now through the organization’s broad-based support which counts on locals and internationals among its community, the PBO has established an endowment fund and legacy club: “We know it’s going to last a long, long time because we are planning a future for it,” Mrs. Berney explains.

Mrs. Berney never stops moving with grace and determination; picking up the hem of her stylish embroidered floral dress, she swiftly climbed the narrow two flights of stairs up to the second level of the Hogar del Niño and we visited the elementary and middle school students. Learning mathematics, we gave an impromptu lesson in addition, and had sweet volunteers come to the chalkboard to answer questions. If students didn’t have the answer, their peers in the back were more than helpful in offering suggestions from their seats. All students of the Hogar del Niño receive instruction in both English and Spanish, and this year the school added three Montessori classrooms! The school hopes to move to a full Montessori program noticing a big improvement in children’s self-confidence, creativity, independence, and participation in learning. It costs about $10,000 per classroom to make this change, providing new materials and training instructors, so it is a project that will take some time to see through. Sandra Alvarado, who works as the Director of the PBO, later tells me: “The goal is to have all the rooms in Montessori or create a mechanism for that age that combines Montessori instruction with regular educational programs in a way to handle the number of children instead of one room for all children.”

As PBO’s capital grows the school adds on to its facilities, this year with an astonishing 77,500 square foot sports pavilion! The building is host to basketball, volleyball, and sometimes tennis games, as well as serves as a multi-cultural center for meetings and graduations. Mrs. Berney and I had the pleasure of happening upon a group of students in Physical Education class, and as we watched the students play a game of basketball she admits: “I was very enthusiastic raising money for the sports pavilion because I could see the money going directly to the children. It’s not used for administration purposes or fundraising. Money really goes to where it should be going. That’s what I liked about it.”

In the school’s library, we noticed a young women tutoring a student in English reading. As part of many institution’s post-graduate programs, college students come to the Hogar del Niño for voluntary services from anywhere from a few months to over a year. StoneHill college in Easton, Massachusetts is one of PBO’s biggest supporters in this area, and we happily met a well-adjusted, young professional in her second year of assisting the school. On our way to the purely solar-powered extracurricular activities center, we made our way through the school’s playground that was added in 2005 by beneficiary, Sargeant Frantz.

The extracurricular center was beautifully painted on the outdoors, and is home to dance, art, music, and instruction for children with hearing disabilities. Inclusion is an essential aspect of the PBO, Alessandra Avanzini, who works within the organization’s scholarship and grant programs, tells me. They want to create an environment where children feel comfortable, accepted, and are surrounded by a community of supportive peers and professionals. In an all deaf classroom where children were studying art, it was fascinating to admire their talented work that proudly hung on the walls. At the time, Alessandra was involved in a proposal for more smart boards in the Hogar del Niño’s classrooms.

“The Patronato Benéficio Oriental has made such a difference in the lives of the children. They receive food, vitamins, schooling, medical care, dental care, and peer groups for support,” Mrs. Berney informed me as we continued through the school’s student outdoor garden “Zona Verde” and on to the school’s medical facility. Through their outreach program, every Tuesday and Thursday the PBO provides dental work for children in the Bateyes settlements of the Dominican Republic, and all of the institution’s medicine is donated. Additionally, the Hogar del Niño receives 80% of its milk and formula supply from Casa de Campo’s Café de la Leche monthly events to support the 200 babies in their Crib Room. Mrs. Berney explains that each year a new chairperson is appointed for the Adopt a Crib room, this year falling under the direction of Joyce Berman, who is an enthusiastic supporter living in New York and the hostess of this month’s Café de la Leche. Among her initiatives in the USA, she hopes to broaden the donor pool in that region.

The biggest fundraiser for the PBO comes yearly through their Hogar del Niño golf tournament, but the organization is also host to a number of activities throughout the year to bring support to the school. The Casa de Campo – Hogar del Niño Corre is one such initiative that is just 10 days away! As demand grows for what is needed for the children of La Romana, the PBO expands. First home to seven workers in their headquarters, the charity has expanded to 27 people in their main offices and over 250 staff in all of their programs. Caring for infants through young adults, the PBO is a fortunate and comprehensive charitable organization for the town of La Romana. It cost about 1 million per year for the school to open, and additionally provides vocational studies in the fields of electricity, plumbing, sewing, cooking, and others, as well as scholarships for college. The students work very hard to receive scholarships, and roughly six are granted each year for colleges in Santo Domingo or San Pedro.

Sandra Alvarado reveals that the Hogar del Niño works very hard to create different projects simultaneously which allows donors to contribute to the particular area they wish. Whether it is education, sports, health or medical, they make it a priority to respect the donor’s request. They are putting together a portfolio of all their areas of focus to facilitate donations, as well as initiating collaborations, grants, international cooperation, and self-sustaining projects for a strong and lasting outlook for the future. Sandra credits Mrs. Berney for her invaluable knowledge and remarkable ability to rally support for the PBO: “We look to her. It’s easy to support you, Mrs. Berney. And it’s a blessing to be here. To work here. Rather than me contributing, it contributes to me. It’s the opposite. I get more than they do by working here.”

The tour of the Hogar del Niño showed me how expansive and impressive the efforts of the Patronato Benéficio Oriental are, and how their improvements have drastically changed the lives of the children and families in La Romana in the past forty years. With so much love and dedication from the individuals working at the school to the volunteers involved in all of their activities throughout the years, and support from a very generous community, it’s clear how much everyone cares and how their work generates a better future for all. As Mrs. Bereny and I drive away she says, “It seems like in the roots of the Hogar del Niño to have the right kind of people working here. Everyone works with the idea for that what is best for the town.”

You can help be a part of what makes the Patronato Benéficio Oriental great and an invaluable service to the town of La Romana! Sign up for the Casa de Campo Corre by purchasing your ticket at one of their many locations: Casa de Campo, the Patronato Benéfico Oriental in La Romana, all the Uepatickets CCN / Services offices and Jumbo; or online at www.uepatickets.com and through the website www.pbo.org.do. We look forward to running with you!

For more pictures of our tour with Ms. Phyllis Berney, see the gallery below taken by good friend and Hogar del Niño advocate, Robert Garcia: