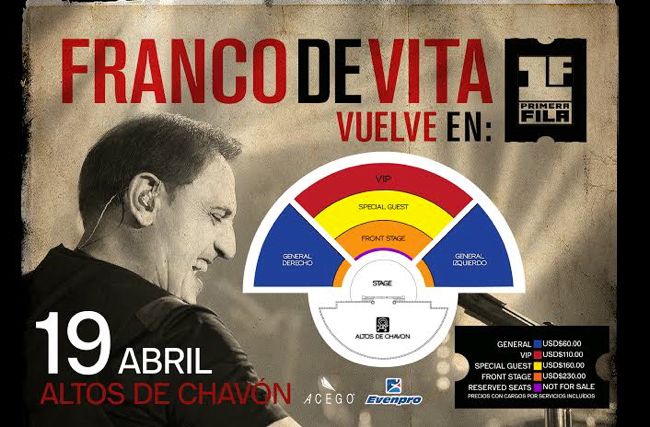 The tickets for the Franco de Vita concert, on the 19th of April are now available at the Casa de Campo Villa Owners Club.

The UEPA tickets express point at the Casa de Campo Villa Owners Club is ready and waiting to you to buy your tickets to this spectacular concert, which will mark Franco de Vita´s second performance in the Altos de Chavón amphitheater.

You can pay in cash or with your credit cards, so what are you waiting for? Don’t wait until the last minute to buy your tickets to see this outstanding performer – if you do, you might be disappointed!

With almost three decades of experience and more than 20 million copies sold, people have been enjoying the music of Franco de Vita since the 1980′s… and thanks to the love of his fans – he’s still at it. “Vuelve en Primera Fila” is also the name of his most recent album, released last year. Including some of his best hits; “Cántame”, “Que no muera la esperanza”, “No hay cielo”, “Sólo importas tú” and “Ay Dios”, among many others, we can expect the concert with the same name, to bring us a similar line-up of unforgettable songs.

Click here for our photos and memories of the Franco de Vita concert in Altos de Chavón in September 2011.

Tickets available: at the Dueños Club

Buy your tickets in advance and join us for this legendary concert!