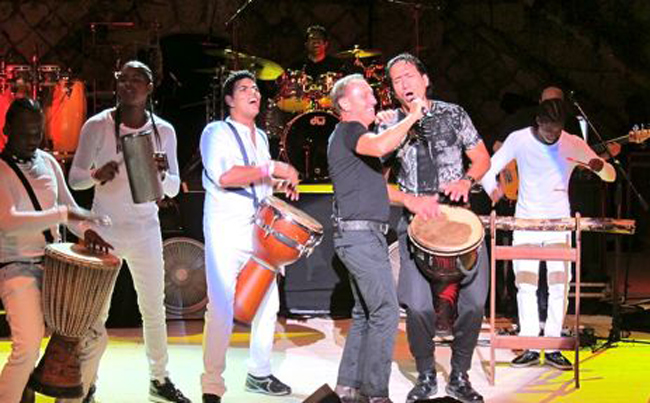 Venezuelan’s own Franco de Vita is coming back to Altos de Chavón on Saturday the 19th of April – which is “Sábado Santo”, the Saturday of “Semana Santa”, Easter week.

Having performed in Altos de Chavón for the first time back in September 2011, Franco de Vita is returning as part of his tour “Vuelve en Primera Fila”, or in other words the return of “En Primera Fila”, the concert he performed on his last legendary visit to Altos de Chavón… With nearly 3 hours on stage, a full house of more than 5,000 fans, no less than 5 guest singers and a ‘bongo drum’ band, De Vita exalted entertainment in the Altos de Chavón amphitheater to a legendary latino level! And now that we hear he is coming back – we can’t wait!

With almost three decades of experience and more than 20 million copies sold, people have been enjoying the music of Franco de Vita since the 1980’s… and thanks to the love of his fans – he’s still at it.

“Vuelve en Primera Fila” is also the name of his most recent album, released last year. Including some of his best hits; “Cántame”, “Que no muera la esperanza”, “No hay cielo”, “Sólo importas tú” and “Ay Dios”, among many others, we can expect the concert with the same name, to bring us a similar line-up of unforgettable songs.

Click here for photos and our memories of the Franco de Vita concert in Altos de Chavón, September 2011.

Tickets will be on sale at Movie Max, Uepa Tickets, as well as at the Nacional and Jumbo supermarkets, we hope they will also be on sale at the Casa de Campo villa owners club – as soon as we get confirmation we will let you know.

Franco De Vita (born January 23, 1954 in Caracas, Venezuela) is a singer-songwriter of Latin music. His first disc as a solo artist garnered three Spanish-language hits in Venezuela. He signed with the Sony label in 1988, and in 1990, his album Extranjero had a song that reached No. 1 on the U.S. Latin charts and won an MTV Video Music Award. His 2004 album Stop reached the Top 10 throughout Latin America and on the U.S. Latin charts.