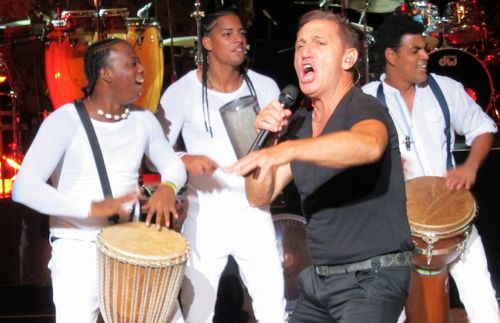 The Franco De Vita concert in Altos de Chavón last Saturday evening the 17th of  September was phenomenal! With nearly 3 hours on stage, a full house of more than 5,000 fans, no less than 5 guest singers and a ‘bongo drum’ band , De Vita exalted entertainment in the Altos de Chavón amphitheater to a legendary latino level! BRAVO!

Franco De Vita of Italian-Venezuelan origins, began his 3 hours music-a-thon with “Dónde está el amor”, as he bounded onto the Altos de Chavón amphitheater stage accompanied by, a bongo drum group and proceeded to sing and dance with an infectious energy, which riled the crowd up into a state of near hysteria!

Franco De Vita has performed numerous times at venues in the Dominican Republic, but this was De Vita’s first performance at the Altos de Chavón amphitheater – which is now being heralded as his best ever performance in the country!

As if Franco De Vita’s solo performances were not enough, throughout the night, De Vita was joined on stage by no less than 5 additional Latino artists; Leonel García, from Sin Bandera, Kanny García and Pedro Capó from Puerto Rico, Debi Nova from Costa Rica and from the Dominican Republic Pavel Núñez, who recently opened for STING, who also preformed in the Altos de Chavón amphitheater.

The concert was opened by David Armengot with his band “Los Tankelab” with a variety of Caribbean rhythms performed using discarded objects made of wood, plastic and metal.

For the 5,000 fans dancing on “las piedras” (the stones) of Altos de Chavón, the Franco De Vita concert will forever be remembered as being truly sensational.

Here are a selection of photos taken during the Franco de Vita concert in Altos de Chavón: