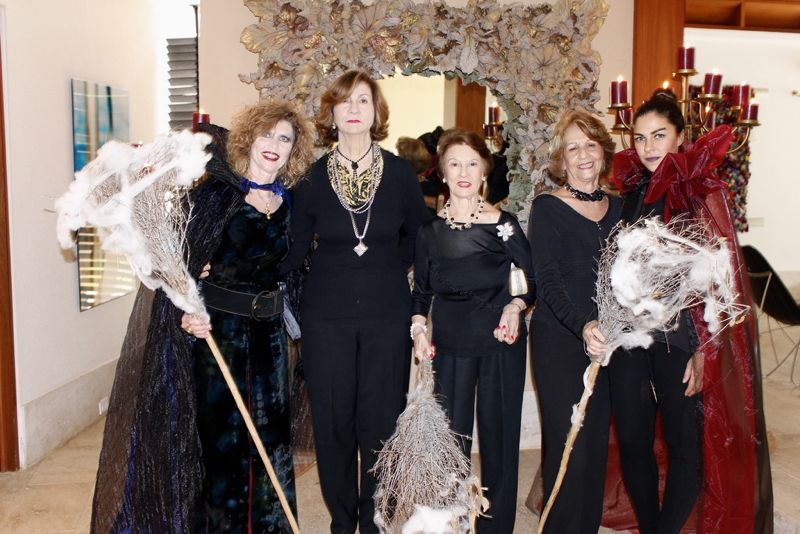 Our lovely Venezuelan neighbor, Adriana Feaugas has quite the reputation – as the hostess of the most extraordinary Café de la Leche events!

You see, having only recently celebrated Halloween, Adriana couldn’t resist stretching the scary season just a little longer by theming her Café de la Leche “brujas glamorosas”, glamorous witches – a challenge for all her attendees to dress accordingly! And with a hubble, bubble, toil and trouble, plenty of black dresses, frightful make-up, the occasional witch hat and cap, the Casa de Campo community did just that!

Meanwhile we must mention Adriana’s spell-binding decorations… not only did she serve up horrifying red and green cocktails, but she also created a Snow White inspired looking glass, complete with a poison apple!

Acting as hostess alongside her mother was Andrea Feaugas, who together with her mother has just launched a new business venture, Pickadeli Gourmet. Pickadeli Gourmet are a catering company who specialize in tequenos, (fried pastry stuffed with cheese / little bites of heaven), as well as a variety of other delicious finger foods. In addition to hosting this Café de la Leche, Andrea and Adriana Feaugas also recently celebrated the opening of Pickadeli Gourmet in La Romana, click here for photos.

The name sound familiar? Well that’s because Francisco Feaugas, Adriana’s husband is one of Casa de Campo’s most famous architects, having designed numerous Casa de Campo villas over the years. His most recent project is Las Pailas in La Barranca, something he is working on with Xiomarita Menendez. Click here to find out more about Las Pailas.

P.S Remember! The aim of the Café de la Leche is to collect milk supplies of the Hogar del Niño’s crib room, where more than 200 little babies are cared for every single day! See below for more info about the Hogar del Niño.