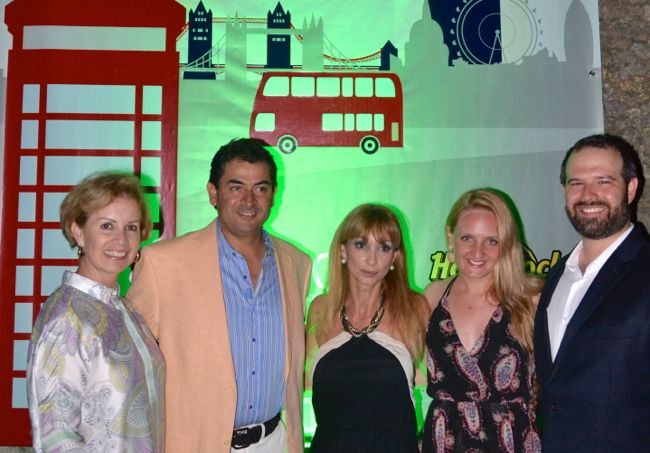 [See below for a glossary of British terminology used throughout this article.]

A little pre-party in honor of Elton John, the king of British pop, the British Bash was sponsored by SILGON modern media company, The Club and the Hard Rock Casino in Punta Cana, as well as Bulldog gin and Chivas 18 whiskey – after all how could we celebrate in true British style without our favorite tipples!

And so in fine British street party fashion complete with bunting, a red telephone box, a red bus and even Big Ben, more than 250 guests were treated to an endless supply of gin tonics – in a variety of delightful flavours – citrus, tropical and cinnamon, as well as of course Chivas 18.

On fine form as the hosts of this cracking do were Philip Silvestri, President of CasaLife magazine, Rebecca Hughes, social editor of CasaLife and Mita Tenconi, owner of The Club Restaurant and Lounge. Also in attendance was Jess Chavez, general manager at the Hard Rock Casino Punta Cana and Nacho Coronado, liquors brand manager at El Catador.

As the evening progressed and this jolly knees-up really got going, out came the “Elton John” star and guitar glasses, as the ladies took the party to the dance floor – and boogied all night to the best of British of music! Luvvly-jubbly – indeed!

We hope you all had a simply smashing time at the British Bash by CasaLife magazine last Thursday February 27th 2014, and so without further ado here are all our lovely photos of the occasion:

Glossary of British terminology used in this article: