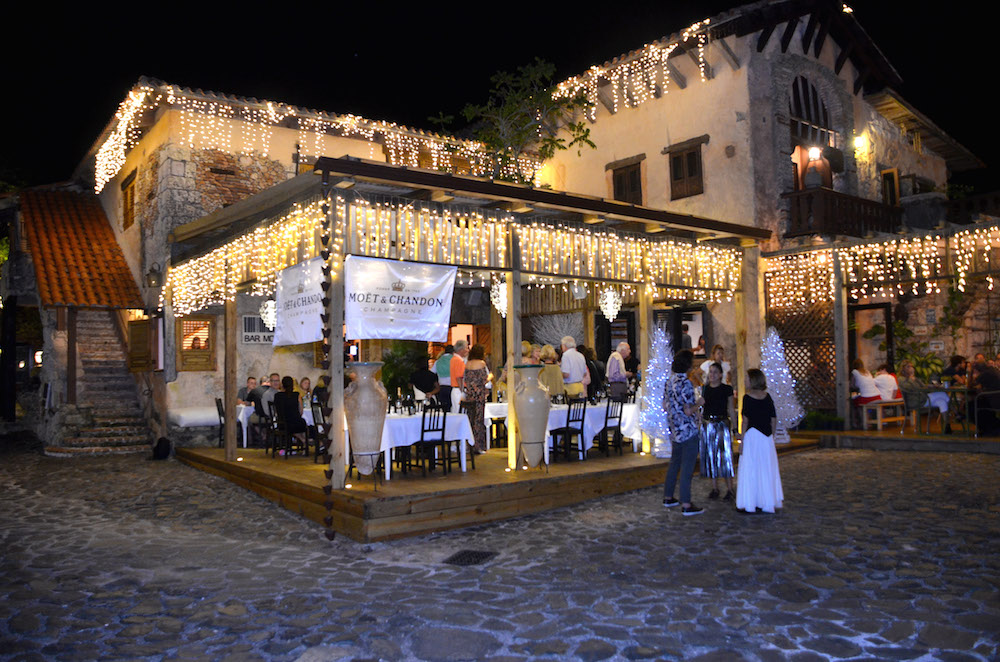 Carlos Chapellin, who also is Bar Monaco’s chef, served up hors d’oeuvres for guests to get to know the flavors and concepts behind their new menu. Featuring dishes from the 21 countries of the Grand Prix, Carlos captures the essence of each country while evolving it with his signature style. You may remember him as the executive chef at Onno’s Bar and Restaurant, and it wasn’t until a lucky encounter with Andrew that the pair decided to go into business together. “We’re not going to open something until I meet someone,” Andrew remembers when conjuring up the idea for a new restaurant in Altos de Chavón. Speaking on Carlos, he says he values Carlos’ superb quality standard of food and consistent delivery. Visitors were encouraged to dine at the opening as well, and many sat for dinner after sipping on Moet & Chandon champagne and taking a spin through the locale’s redesign.

What was known as Papa Jack’s for many years, changed ownership in the summer of 2016 and quickly went under renovation. Apart from a completely remodeled and covered patio, Andrew explains his favorite part of the bar is “upstairs in the daytime looking out the window.” The hands-on DIY visionary found a big discovery when he took a crowbar and pulled out a wall that was covering an upstairs window. Now, the second floor corner windows showcase a gorgeous view of Plaza Chavón, sitting just off the St. Stanislaus Church. You’ll also find more Formula One memorabilia upstairs along with another bar and lounge area, and outdoor terrace for special occasions. The bar is complete with inventive bar stools—life size versions of champagne corks! How cool is that?

As for the name, Andrew tells Casa de Campo Living he bought the brand Bar Monaco from the Prince of Monaco himself who had also sold him Café de Monte-Carlo, a restaurant the monarch replaced with Café de Paris. Bar Monaco in Altos de Chavón offers a young, hip, and modern flair on a 1950s vibe. Andrew’s passion for finding locales and talented chefs, and starting new projects may have him putting his mark on other restaurants in the area. Only good things are to come for this trio, which also includes Helen DeMay at the helm. If you missed their Grand Opening on Friday and New Year’s Eve celebration the following night, we suggest you make a reservation ASAP for an unforgettable dining and nightlife experience.

The following pictures were taken by Wilfredo Alvarez at Bar Monaco’s Grand Opening on December 30th:

and by Dariana Soriano on New Year’s Eve: