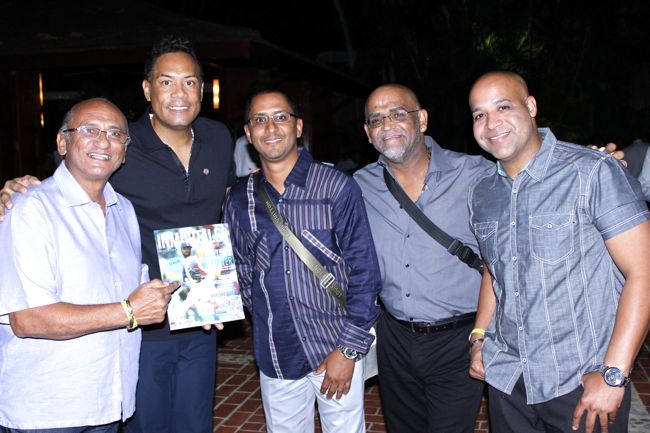 One of the most glamorous and memorable events of the recent Latino Baseball Hall of Fame week of celebrations surrounding the 5th Grand Induction Ceremony at the Altos de Chavón amphitheater was the dinner at Casa Grande, hosted by Alfy Fanjul, honorary chairman of the Salón de la Fama organization.

Now an annual tradition, the dinner was celebrated on Friday the 7th of February with cocktails on the terrace overlooking the beautiful Caribbean ocean, followed by dinner on the lower deck – a place where many a magical occasion has been enjoyed from the annual Cartier Benefit to the Magical Splendor for Life by the Fundación MIR.

Speaking on behalf of Mr. Alfy Fanjul, Roberto Weill conveyed his apologies and regret for not being able to make the celebration, but nevertheless sent his warmest regards for the many former Major League Baseball players gathered at Casa Grande.

Taking part in the celebration was Vinny Castillo, Moises Alou and his father Felipe Alou, Omar Moreno, Osvaldo Virgil, Julian Javier, Teodoro Higuera, Luis Olmo Rodriguez and Bengamin Oglivie, among others. The players were joined by their family and friends, as well as members of the Casa de Campo community, such as Daniel Hernandez, manager of the Casa de Campo hotel, Peter Bonell, chief marketing officer at Casa de Campo and Philip Silvestri, president of SILGON and INMORTALES magazine – the official publication of the Latino Baseball Hall of Fame.

Another guest of honor was the ambassador for the United Stated in the Dominican Republic, Mr. James W. Brewster, accompanied by his partner Bob Satawake.

Other events Latino Baseball Hall of Fame (Salon de la Fama del Beisbol Latino) celebrated that weekend included the welcome cocktail on the Paseo del Mar in the Marina Casa de Campo, a welcome dinner in honor of Mexico at La Casita, also in the Marina Casa de Campo, as well as of course the 5th Grand Induction Ceremony celebrated at the Altos de Chavón amphitheater.

The following collection of photos were taken at Casa Grande, Casa de Campo: