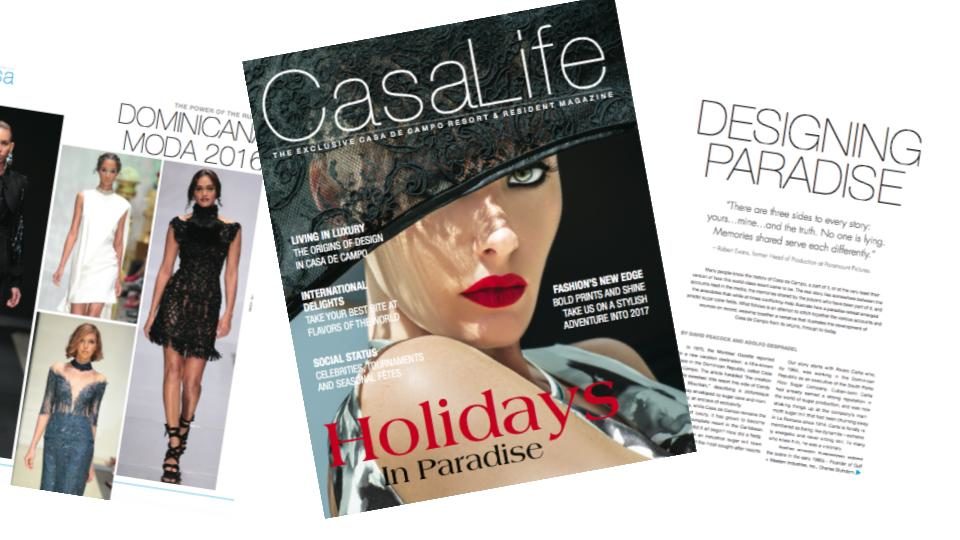 We couldn’t be more excited to announce the launch of the Holiday edition of our sister publication, CasaLife. In it, we headline “Designing Paradise”, the first of a 4 part series where David Peacock, a community member passionate about researching how Casa de Campo came to be, and Adolfo Despradel, director of the Planning and Design Department for Costasur, take a step back in time to stitch together the story of how an uninhabited piece of land off Central Romana’s sugar mill turned into a sprawling oasis that has become the epitome of sophistication.

Peakcock and Despradel share newspaper quotes from the 1970s, and Pete Dye’s initial reaction to the request for him to design the now-famed Teeth of the Dog golf course–which we are sure will be an unexpected anecdotes for readers! They also uncover how La Romana got its name, and how the grounds that may not have been ripe for sugar cane production and cattle grazing became the setting of a top Caribbean destination.

Carta’s idea for a ‘Dominican Rivera’ can be read about while viewing early photos of the resort from the Bluhdorn family archives, in addition to recent ones by Despradel and Central Romana.

“We will retain the Dominican culture; the character of the country will be exposed, not buried under some kind of Las Vegas-Miami Beach nonsense.”

CasaLife’s Holiday 2016 issue also features coverage of the Fall season’s top events and an interview with top fashion icons (which I proudly authored!). It arrived at villas, the hotel, and locales around Casa de Campo over Christmas weekend, and is a must-read for all those looking for a little bit of history on our familiar piece of paradise. Stay tuned for the next installment of “Designing Paradise” which is set to come out in our Spring edition of CasaLife and will continue to bring together the anecdotes and narratives that make up Casa de Campo.