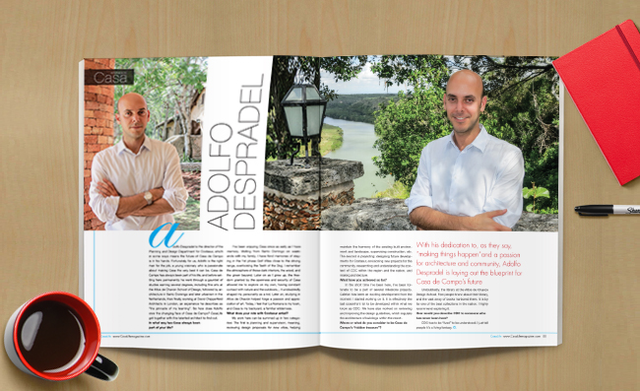 This interview was previously published in our sister magazine, CasaLife Magazine. It’s an interview with the man whose hands hold Casa de Campo’s future.

Adolfo Despradel is the director of the Planning and Design Department for Costasur, which in some ways means the future of Casa de Campo is in his hands. Fortunately for us, Adolfo is the right man for the job, a young visionary who is passionate about making Casa the very best it can be. Casa de Campo has always been part of his life, and before settling here permanently he went through a gauntlet of studies earning several degrees, including fine arts at the Altos de Chavón School of Design, followed by architecture in Santo Domingo and later urbanism in the Netherlands, then finally working at David Chipperfield Architects in London, an experience he describes as “the pinnacle of my learning”. So how does Adolfo view the changing face of Casa de Campo? CasaLife got together with this talented architect to find out.

In what way has Casa always been part of your life?

I’ve been enjoying Casa since as early as I have memory, visiting from Santo Domingo on weekends with my family, I have fond memories of staying in the 1st phase Golf Villas close to the driving range, overlooking the Teeth of the Dog. I remember the atmosphere of those dark interiors, the wood, and the green beyond. Later on as I grew up, the freedom granted by the openness and security of Casa allowed me to explore on my own, having a constant contact with nature and the outdoors… it undoubtedly shaped my personality as a kid. Eventually in my teens, I developed good friendships with many of the locals I encountered while skateboarding or riding my bike, it was terrific. Later on, studying in Altos de Chavón, helped forge a passion for the production and appreciation of art. Today I feel La Romana to my town, and Casa my back yard, a familiar wilderness.

What does your role with Costasur entail?

My work here can be summed up in two categories: The first is planning and supervision; meaning, reviewing design proposals for new villas, helping maintain the harmony of the existing built environment and landscape, supervising construction, etc. The second is projecting; designing future developments for Costasur, envisioning new projects for the community, researching and understanding the context of CDC within the region and the nation, and making architecture.

What have you achieved so far?

In the short time I’ve been here, I’ve been fortunate to be a part of several milestones projects for the company. Caleton, has been an exciting development from the moment I started working on it, effectively the last ocean-front lots to be developed within what we know as CDC. The design brief called for homes around a particular beach setting, with amenities such as a clubhouse and beach pool, while at the same time containing green areas which could serve as backdrop for both the beach and the homes around it. We have also worked on reviewing and improving the design guidelines which regulate the architecture of buildings within the resort, protecting the density and sense of permeability which has made CDC renowned and sought throughout the world. Currently we have been working on the new north entrance connection to the Autovia del Coral highway, as well as plans for a new recreational parkland area around Altos de Chavón, exploring its potential as a means to developing new forms of open space and residential development within CDC.

How do you enjoy spending your spare time in Casa de Campo?

Ironically doing things that resemble work! Catching up on what’s going on in the architectural world, sifting through books, taking photographs. But I also really enjoy cooking, eating, and sharing casual quality time with friends, family and nature.

Where or what do you consider to be Casa de Campo’s “hidden treasure”?

Undoubtedly The Library at the Altos de Chavón Design School. Not many people know about the design school and the quality of work produced there. But fewer people know about their library, and the vast array of books harbored there. It is by far one of the best collections in the nation. It’s accessible to everyone, I highly recommend exploring it.

How would you describe Casa de Campo to someone who has never been here?

Casa de Campo has to be lived to be understood, I just tell people it’s a living fantasy.