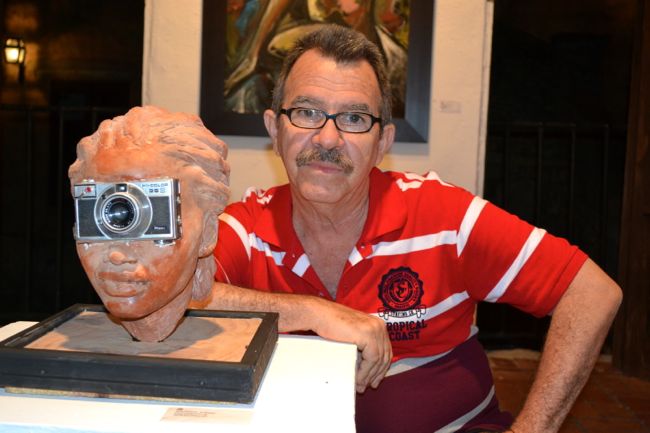 One of the two artists displayed in the “Around the Bases” exhibit recently on show at the Altos de Chavón Gallery, Cuban artist Wilfredo Torres represents a living history of art, and we have an exclusive interview with the man himself.

The “Around the Bases” exhibit in Altos de Chavón was an exposé of art by Dominican artist Daniel Infante and Cuban Wilfredo Torres, two artists that excel in their immensely different styles but present a unique blend of truly amazing art. Transcribed here is our interview with one of these two masters, Wilfredo Torres, a Cuban artist who excels in varying styles of artwork, from portraiture to sculpting to abstract painting.

@cdcliving: Let’s start at the very beginning, how were you introduced to the world of art? Since when did you know you wanted to be an artist?

In my native country of Cuba, my family was always involved with art and I couldn’t be an exception, but certainly there were other factors that influenced my eventual career and were just as important. Upon entering mandatory military service in 1967 I had the ability and opportunity to start working making mechanical sketches, and evidently that helped me quite a bit. After leaving the army I started working at a newspaper, where I finished developing the more indispensable tools of my art… The rest is a long story.

@cdcliving: We know that you worked with the well-known humor magazine Dedete. How did this influence your artistic growth?

I think Dedete was my school, in a way. There I interacted with my country’s most important artists, to whom I owe so much of my knowledge. I worked there for 22 years and by the end of it I worked there as creative director. Dedete always was and is a publication with a very critical, satirical profile, so we had lots of headaches and problems with Cuban authorities back then. We received various awards, both nationally and internationally, both as the magazine and for myself personally, but the most important one was in 1985, when we were honored with the prize of Best Publication Of Its Type in the World at the Forte dei Marmi in Italy. Lovely memories.

@cdcliving: Your works have been displayed in various American and European countries – which countries have you liked best for their reception of your artwork?

I think all of those countries were beautiful and equally interesting, I don’t want to be a hypocrite in that regard. However, there’s no doubt that the quality of the museums is different and determined by preferences, and it’s not debatable that some of them have influenced me more than others. Now I reside in this beautiful country and feel its influence – It’s inevitable, the Caribbean’s influence is strong.

@cdcliving: What would you recommend for young people looking to get involved in the world of art?

I’d recommend for them to study, to prepare. There’s no other way. The path of art is arduous, full of highs and lows. It’s a constant risk, but life is a risk. Personally I consider that general culture is basic in this profession; reading, seeing films, writing, investigating, looking around more, asking questions, etc. You never tend to get a lot of knowledge from any one thing, and each one gives us a different point of view.

@cdcliving: Which of the artworks presented in “Around the Bases” do you like best? Do you feel a stronger connection with one work over another?

I think I share a stronger bond with the three-dimensional sculptures made in clay. If I was made to pick one, I would choose the ones that show a camera and a woman’s face welded together. That interaction always seemed interesting to me.

@cdcliving: How did you meet Daniel Infante, and how did the two of you begin collaborating for events like these?

I met Daniel in the year 2000, coincidentally, right here at Chavón. I was his teacher, but now, as you can see, we are colleagues. I think that our ability to work together is very interesting, at least to me. Daniel works a lot and it always excites me to share exhibitions with him. We have various projects that we’re working on, I think that’s always a very healthy thing to have.

@cdcliving: What inspires you to create your works? Do you have some sort of process for obtaining mental images or inspirations?

Not really… I think they show up when they want to and where they want to. I’m always reading, teaching or investigating, so my brain is bound to inevitably make connections.

@cdcliving: You’re recognized for your fantastic paintings and portraits, but how did you begin to work with sculptures and ceramics as well?

It was an accident, perhaps, or destiny. I was happy with my work as creative director over at Dedete, but the magazine was closed and we all lost the job we loved. I went on to work as the head of design at a newspaper, but I quit soon enough. There, in that environment was where I met friends who were into ceramics and began that journey.

“Around the Bases” – Exhibit

This exhibit was a collaboration between Wilfredo Torres and Daniel Infante.