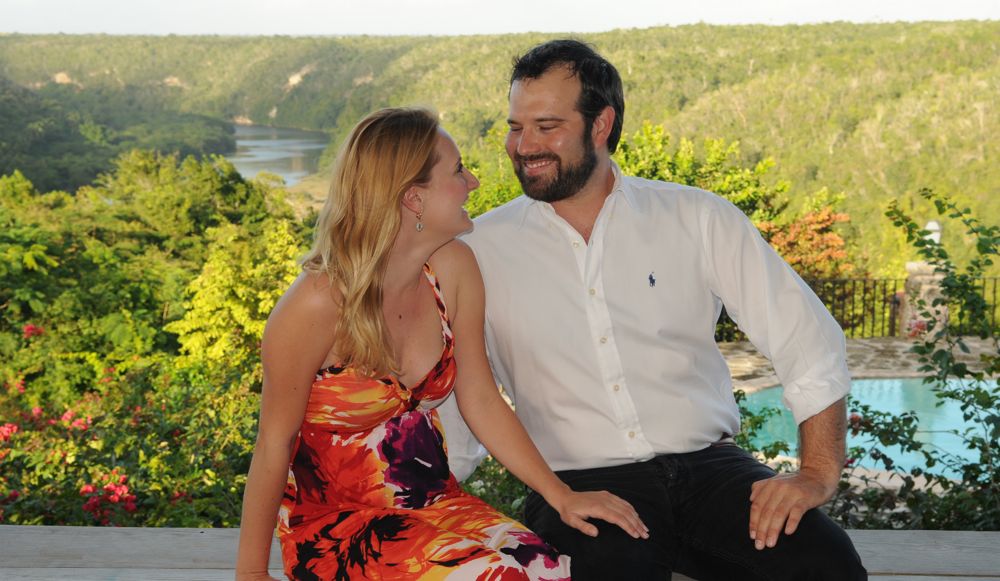 FINALLY! So yes the rumors are true… Philip Silvestri and I (Rebecca Hughes) are finally getting married, and now with less than 1 month to go until our big day, I decided it was about time to share (some) of the details with you!

So while it may seem rather strange to write about our upcoming nuptials on a website (and Philip was staunchly against it), I decided to see it as a public notice – like the kind people would put in the newspapers in days gone by. So if Philip and I would to do a newspaper notice it would look something like this:

A reception will honor the couple that evening. The event is for intimate family and friends.

The bride-elect is a graduate of Leeds University and is employed at SILGON in Casa de Campo. Her fiancé, Philip Silvestri, graduated from Babson College in Boston and is the founder and CEO of SILGON.

The couple will reside in Casa de Campo in the Dominican Republic.

After we got engaged in November 2013 in Disney World (click here for that story), we planned to get married in November 2014, and celebrated our engagement party at a fun gathering hosted by Phyllis Berney on Sunday, March 23rd at her Casa de Campo villa (click her for photos of the fiesta).

Well after that, despite many thinking we were married already (perhaps it was the dress I chose for the engagement party or the “Announcing the future Mr. and Mrs. Silvestri” article title that had everyone confused), we were not actually married. And well… life got in the way of planning a wedding. Days turned into weeks, weeks turned into months and recently those months turned into a year… and so one evening during a “date night” at La Caña by Il Circo at the Casa de Campo Hotel, we decided we should just hurry up and get married. I think you all agree!

Having flitted from one location to another; Casa de Campo was a no because we work here; aboard a cruise ship; Paris; Turkey; Disney World (my choice); Playa Grande on the north coast of the Dominican Republic… and countless more. But in the end we were swayed by the promise of organisational help and elected the charms of Dallas (yes, cowboy country) for the celebration! YEEEHHHAAAAWWW!

So now that the wedding is well on it’s way to being planned… (“más o menos” as we say here), what are we doing?

Well, we’re doing a shabby chic/western theme ceremony and party in the Stockyards of Fort Worth. The Stockyards is this really fun cowboy area, where everyone seems to be wearing cowboy boots, longhorn cows parade down the main street once a day and country/western music fills the air wherever you go from the bars, restaurants and stores, to the rodeo! So there you have it!

Yeehhaaww! (OK so it might be slightly more glam than this!)

Right now I’m taking it one step and one day at a time – and this past weekend we enjoyed my bridal shower/bachelorette party… you’ll be seeing some of the photos from that knees-up soon!

Thank you to everyone for your support and excitement for us both! We’re truly blessed to have such a wonderful community who love us!

Since we published this article this morning we’ve been overwhelmed with messages of congratulations and people who want our gift registry… and so while this is totally unorthodox (and again something Philip is staunchly against), here it is: www.honeyfund.com/wedding/rephil

Thank you! We love you all!

Philip and I are soo excited about our life together that we’ve opened a Facebook “fan page” and our own YouTube Channel, called “Silvestri Life”, where we’ll be posting videos and updates about the wedding, honeymoon and life in general!