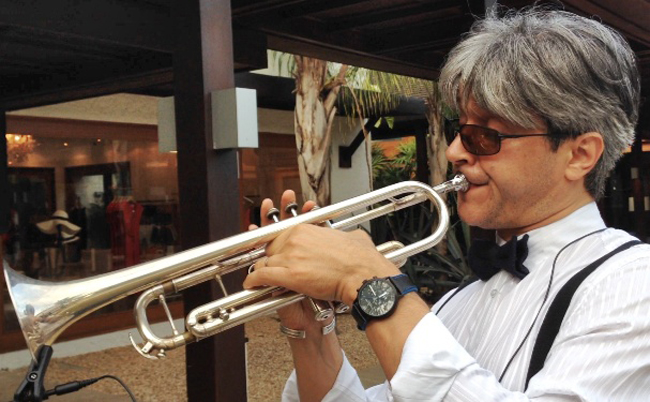 Now a regular performer here at Casa de Campo and an excellent Bulgarian musician, we sat down for an interview and recorded a live session with prodigious trumpet player and singer Victor Mitrov.

Upon hearing he would be coming to Casa de Campo this summer, we knew we had to sit down for an interview behind the curious life of a musician of his caliber, one who has performed in orchestras around the world and in countless genres and styles, but an interview seemed almost too little to do… So we got some equipment together and are proud to present the very first Casa de Campo Living Live Session with the excellent Bulgarian singer and trumpet player Victor Mitrov.

Below is our interview with this talented (and cooperative – especially with all the kinks of the first Live Session!) gentleman, who also performed three songs for us: the first, recorded in audio and video, and edited with the generous help of filmmaker Ana Valeria Castillos, a recording of jazz classic “Cherry Pink & Apple Blossom”, in which Mitrov’s stellar trumpet abilities shine; the second, a recording of the song “Volare”, and the third, last but not least, an amazingly well-done medley of various traditional Dominican songs that will have you swearing the singer is from the depths of the Cibao, not from Bulgaria!

@cdcliving: Tell us about your childhood; at what age did you begin to have musical tendencies? Was there family influence in how these came about?

Yes. My parents weren’t professional musicians, just aficionados who love to sing and love music, so I began at a very young age to play the violin, when I was five, due to their influence, but I didn’t do very well, especially since I didn’t like it. I don’t want to offend violinists, but I found the instrument to be boring, so I just moved on to the trumpet, when I was eleven or twelve years old.


@cdcliving: We know you developed your skills at the Musical Academy of Sofia in Bulgaria, what can you tell us about your experiences there?

It’s a very competitive place to get into, through rigorous exams. I remember there were fifteen trumpet players competing for three places in the Academy, which is to say, I did very well.

@cdcliving: Well, now we know you were once a violinist, you didn’t like the violin, moved on to the trumpet, but, how did you come to be a singer?

Well, I liked to sing since I was very young. At all our family reunions at my house, I remember I’d never let the guests leave before I’d sung them a song. I’d say “look, stay there, I’m going to sing to you.” After that, I’d be placed on top of a table and I’d sing to them… Some years later, as a student, a group of teenagers and I would get together, play Rolling Stones and Deep Purple songs, you know, like teenagers do, bass, guitars, drums… I was the singer. I never thought it would be how I would make a living, though. But that’s how its been.

@cdcliving: What musicians inspired you when you were young?

International musicians, mostly. I’ve always loved Arturo Sandoval and Wynton Marsalis, when it comes to jazz, and in classical music, it would be Maurice André as a solo trumpet player, and, as part of an orchestra, it would be Philip Smith, who just recently retired from the New York Philharmonic.

@cdcliving: You’ve performed as part of various orchestras, in France, Italy, Germany, Bulgaria, and of course, the Santo Domingo National Symphony Orchestra. In which of these would you say you’ve had the best experience?

Look, every orchestra has it’s own life. Generally speaking, musicians are the same here, in China, in Korea, anywhere, musicians are of the same way of thinking, so united in an ensemble, we become a family of sorts, with its own life, its own experiences. For instance, in Italy I had the opportunity to work with conductors of a very high renown, and it was a fantastic experience. Here in the Dominican Republic, as part of both the Symphony Orchestra and the Festival Orchestra, the latter unites every two years to a make an orchestra of over a hundred musicians, without a doubt the most important festival in the Caribbean. I’ve had an amazing time.

@cdcliving: What can you recommend for people who are looking to be educated in music, to work on it as a profession or on an amateur level?

First, you have to get a good teacher, to teach you the basics. I’ve been giving private classes to a lot of trumpet players who play with various different musical groups, but have never studied music. They’ve studied form and technique at their own, local, level. I’ll tell them proper technique, you know, “oh, breathe through here in this way,” and they’ll be surprised at it. A good teacher is fundamental to the development of a good musician. After that it’s all luck, being at the right place at the right time.

@cdcliving: In your shows, you play many different styles of music. Which songs or types of songs do you enjoy playing more?

That depends on how the people are – if they’re responding well, or they come out to dance and have fun, well, more lively music is much more enjoyable, such as merengue, or salsa. It’s always great to see people having a good time.

@cdcliving: Anything else you’d like to say to our readers?

Music is my life. That’s all I can say.