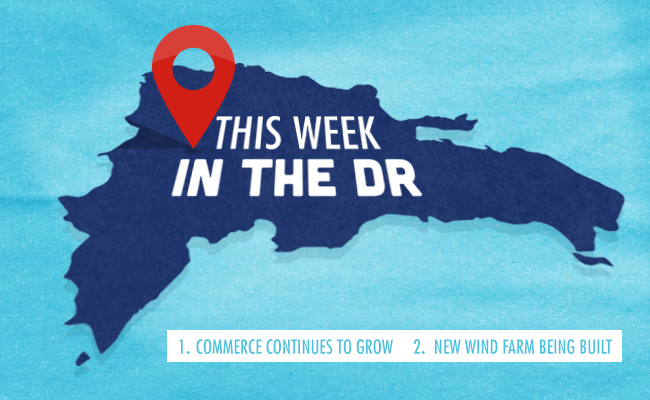 It seems the Dominican Republic is adopting the measures given by the Worldwatch Institute a couple weeks ago when talking about the future of renewable energy in the country, because construction of the Larimar project, which is the 2nd major wind farm in the country, started early last week. And on another note, the Dominican Republic has become the “champion” in the fight against malaria in the Americas, since it has been reduced by 77% in the last 10 years.

The wind farm features 15 Vestas 84-meter high V112 turbines which can generate 3.3 MW each, for a total of 50 megawatts. EGE Haina said the nacelles, or the housing which holds the main components are already in the country.

The new plant is expected to start operations in early 2016 and, after the Los Cocos-Quivio Cabrera park in nearby Juancho, Larimar will be the country’s second major wind farm which will double the Dominican Republic’s power generation from wind

The Ministry of Public Health assured reporters that the incidence of malaria has dropped 77.78% between 2004 and 2014. Malaria only increased in 2010, the year of the catastrophic earthquake in Haiti, that led to a mass immigration of Haitians, some of whom may have been carriers of malaria.

According to Jose Manuel Puello, the deputy minister in charge of Collective Health, there were 16 deaths from malaria were registered in 2004. 10 years later the number of fatalities was four. He also added that this shows that the mortality rate went from 0.18 fatalities for each 100,000 citizens in 2004 to .04 fatalities for the same 100,000 persons last year.

He indicated that these latest statistics place the country as the champion of the Americas in the struggle against malaria over the last 10 years, an accomplishment that has been recognized by the Pan-American Health Organization.

Last Wednesday, Minister of Industry and Commerce, Jose Del Castillo Saviñón said that vehicle imports in the Dominican Republic were up 6.5% in the first quarter of this year. He compared this to a 6% increase in December of 2014 and 6.2% increase between January and March 2015.

He made the comments while speaking at the opening of the First Anadive Convention and Expo 2015. Anadive represents vehicle importers in the Dominican Republic. And added that the significant reduction in the fuel prices has favored the sector.

Likewise, Del Castillo Saviñón forecasts that by the end of this year there would be an even greater expansion of the sector. He added that new car imports reached 18,211 units and used car imports have topped 26,065 in the first six months of the year, as reported by Noticias SIN.

The Ministry of Labor, through the National Salary Committee, announced a 15.5% increase in the minimum wage for construction workers. The increase was agreed upon unanimously by employers and workers who were part of a committee presided over by Felix Hidalgo. Labor was represented by the National Federation of Construction Workers and employers were represented by the Acoprovi and Copardom organizations.