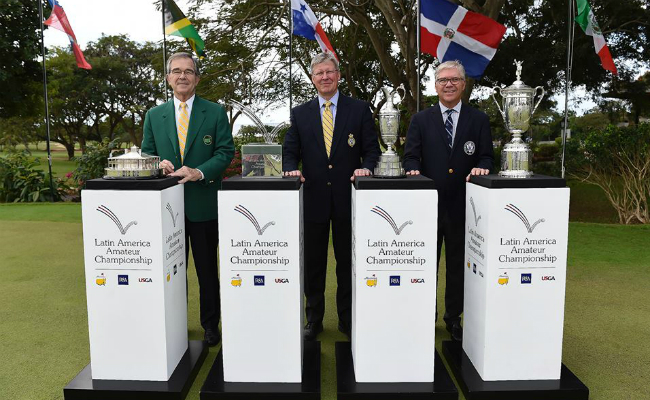 The Founding Partners of the LAAC during round one of the 2016 Latin America Amateur Championship at Casa de Campo.

LAAC is a collaboration between three of the most influential golf organizations: the Masters Tournament, The R&A and United States Golf Association (USGA). This is the second edition of the championship, the inauguration took place in Buenos Aires, Argentina where Matias Dominguez won first place.

This edition brings together the best players from 27 countries in the region, 108 players in all, where their abilities will be tested on Casa de Campo’s renowned Teeth of Dog golf course, designed by Pete Dye. The LAAC will be a life-changing experience for the players, wherein the champion will have the opportunity to play in the Masters Tournament 2016 in April as well as exemptions into The Amateur Championship and the U.S. Amateur Championship, and earn spots in qualifying for The 145th Open and the 2016 U.S. Open.

Amongst the players to watch this weekend, are Matias Dominguez, defending champion, Claudio Correa and Joaquin Niemann all from Chile; Alejandro Tosti (the exceedingly close runner up from the LAAC in Argentina), along with Matias Simaski and Gaston Bertinotti who are also from Argentina, Juan Alvarez from Uruguay; André Tourinho from Brazil; Jorge Garcia from Venezuela; Santiago Gómez from Colombia; Roberto Ruiz and Álvaro Ortiz from Mexico; José Méndez from Costa Rica; and Juan José Guerra, Chad McCann and José Hernández from the Dominican Republic. See LAACgolf.com’s recap of Round 1 yesterday:

The LAAC press conference took place Thursday morning in the Flamboyan Conference Center in Casa de Campo with Billy Payne, Chairman Masters Tournament, Mike Davis, USGA Executive Director, and Martin Slumbers, R&A’s Chief Director, as members of the panel. During his welcoming speech, Mike Davis looked back at the inaugural championship as being an “unqualified success” and also mentioned the two main reasons why this championship began: (1) To give an arena a championship for elite and amateur players in the Latin America area a chance; and (2) To develop the game and inspire the game with hopes to see the proofs of this in the years to come.

Next year’s venue was announced, and the LAAC 2017 will be held in Panama! Below is a video of the announcement, from LAACgolf.com:

Yesterday’s line up ended with Alvaro Ortiz and Jose Andrés Miranda in the lead with Par -4. Check out the LAAC Leaderboard for today’s live update! It’s an exciting today; the weather is beautiful and we hope you are out enjoying the tournament firsthand.