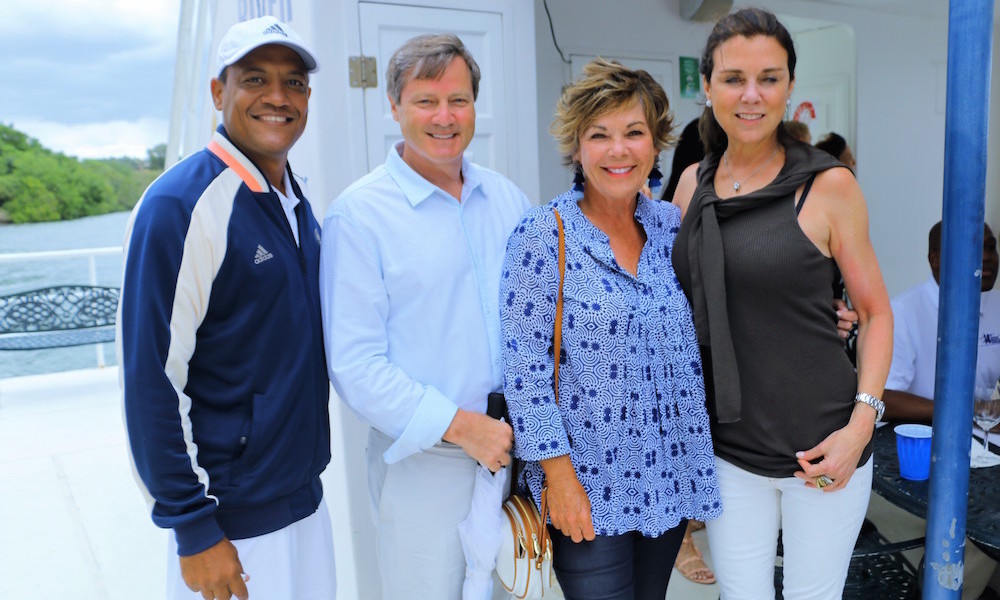 This year the McDaniel Family Foundation hosted its 14th annual tennis tournament from March 6th – March 10th. On Saturday, March 9th, the McDaniel’s foundation organized a river cruise for the donors with appetizers, an open bar, music, and of course the raffle! The cruise set sail at 4 pm, going up the Chavón river and back for a wonderful afternoon on the water.

Rick McDaniel, founder of the McDaniel Tennis Tournament (the principal fundraising effort for the ball boys scholarship fund) every year hosts a gathering for the sponsors; for the third year in a row and thanks to the contribution of Saona Diving who donated the river cruise boat and to Casa de Campo who provided the cocktails and hors d’oeuvres, a group of Casa de Campo villa owners and visitors enjoyed a scenic cruise up the Chavón river. They set sail from the riverside dock of the Marina Casa de Campo on Saturday afternoon.

Cruising past palm trees, exotic tropical birds, and the occasional cluster of cows, Mr. McDaniels welcomed everyone and gave out a special recognition to Dr. José Avila. Last year, Mr McDaniel announced that the ball boys and their parents will also be provided health insurance thanks to the contribution of Dr. José Avila, a retired Casa de Campo ballboy who, thanks to having learned tennis here, earned a scholarship to study in college and is now a doctor along with 2 other retired ball boys who are also doctors. They started a foundation to help la Romana’s community members and have performed more than 200 medical operations! Their clinic has over 42 doctors with various specialties. What a wonderful success story! This year during the semifinals games that took place on Saturday morning, Dr. Avila and a group of doctors came to La Romana Country Club and examined 23 boys. Thank you, Dr. José Avila for your contribution!

The mic was then passed over to Danilo Vicioso and tennis pro Adonis to draw the raffle.  The raffle prizes ranged from dinners in la Marina to boxes of cigars to massages to golf and tennis lessons to jewelry from Everett Design and much much more! Everyone on board anxiously awaited their number being called for fun prizes donated for the cause!

Music played keeping the mood lively yet relaxed at the same time as cocktails and appetizers circled the boat. They served delicious warm empanadas, meat skewers, fried shrimp and more! Guests mingled admiring the scenic river views, like Altos de Chavón way above on the cliffside!

This year, the McDaniel’s team has raised $56,000 USD for the ball boy foundation! All the funds raised go towards the player’s health insurance and towards a special scholarship fund for ball boys. Many of these ball boys and players have been a part of our tennis community for years and they are so deserving of and grateful for the fundraising efforts of everyone involved!

The following day, Sunday, March 10th, the finals were held at the La Romana Country Club with a large crowd of community members and sponsors supporting the event. Stay tuned for full coverage on the finals!

*Pictures were taken by Dariana Soriano on the McDaniels River Cruise on March 9th, 2019: